You’ll know where you stand when you do. You’ll see achievements clearly, and re-hash disappointments. You can plan the future by taking sto ck of the past and, in the case of John McCain in his new book “The Restless Wave” (with Mark Salter), you’ll know yours was a life well-lived.

In the twilight of his life, McCain has many “accumulated memories.”

He begins with a list of loss: fellow politicians, adversaries, admired men, family and some who served with him in Vietnam. On that latter subject as a whole, McCain is relatively mute; his war years are left for a different book. 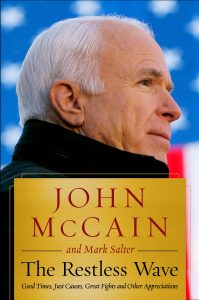 Mostly, in fact, the major focuses of “The Restless Wave” are the 2008 campaign, issues of human rights and, in a bit of a whirlwind narrative, McCain’s diplomatic visits to the Middle East.

On the campaign, there are a lot of coulda-shoulda-woulda moments: in his decision to run in the first place, in his campaign’s finances, in some of the things said off-the-cuff, and in McCain’s stances on issues he knew to be unpopular. He still regards Sarah Palin with warmth, and no regrets but he says that when Lehman Brothers filed for bankruptcy, he saw where things were heading and he tried “to live completely in the moment, not thinking ahead to when it will be over.”

Readers will understand why McCain holds the opinions on torture that he does, and why he’s outspoken against the possibility that the U.S. would use torture against captured enemies. He also admits to knowing that his positions were occasionally controversial and that he sometimes ignored others’ political ideologies but “… I don’t need any more approval than a quiet conscience.”

Toward the end of his book, he writes of “shocking allegations” of Russian interference in the 2016 election, and of his “minor role” in the dossier controversy; to say that McCain is no fan of Putin is an understatement. He writes of his deep friendship and “fights” with adversary Ted Kennedy; about his role in the health care debate; and of his consternation with President Trump.

Like nearly every political biography ever released, there’s a lot of chest-thumping and assertions of correctness inside “The Restless Wave,” and astute readers will note more than just a little repetition. Moreover, though, this book fairly rings with a sense of leave-taking that, despite what we know, imparts an oddly-faint feeling of surprised disbelief not unlike losing a distant relative you barely knew. In his final chapter, author McCain (with Salter) sums this memoir up in the most bittersweet of ways, acknowledging that cancer may take his life, the same as it took that of Kennedy, and he begs readers to “return to regular order” for the America he loves.

There have been many political books released this calendar year but this one is different, in that there’s a lot here you haven’t heard. Overall, and despite that it’s sometimes not the smoothest read on the shelves, “The Restless Wave” is a good account.