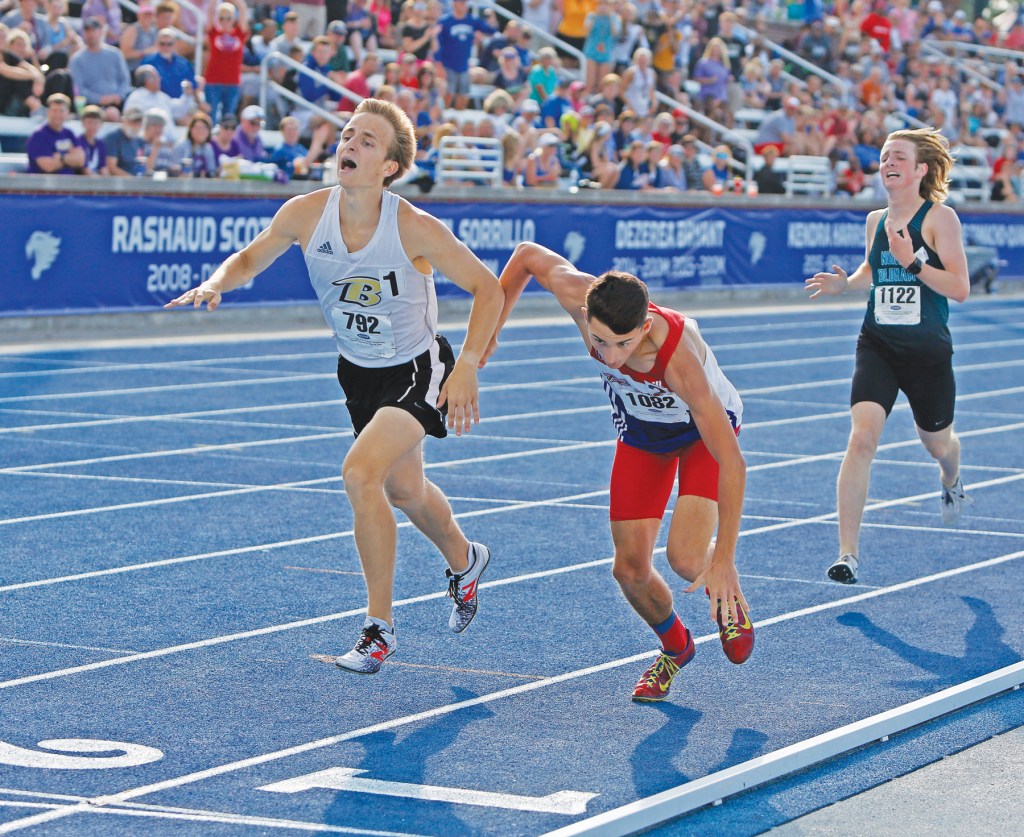 Boyle County track and field has a philosophy: Winning hurts.

That wasn’t more plain to see than in the 800 meter run in the 2A state track and field meet last weekend at the University of Kentucky.

Jackson Cox of Boyle County and Mercer County’s Ty Divine shared one of the greatest moments of the season in that race: Divine leapt out to an early lead and led by nearly 50 meters in the final lap.

Both runners would fall down at the finish line, out of pure exhaustion and trying to beat the other. Both runners set personal records in the event — Cox finished at 1:57.05, Divine at 1:57.11.

“Our philosophy is that last 100 is pure grit. Pure determination,” Boyle County head coach Brent Wagner said. “You get through it on training, working your arms, it’s absolute raw, blue-collar grit. If you want it, go get it. At the end of the day, every step counts. That race right there just proves everything about Jackson.”

It was a thrilling finish, and no one knew who had won until the results showed on the official big screen at the track. For Wagner, it was even more electric.

“I was on the 300 mark. There was a medical tent at the finish line, and him and Divine disappeared from the end of the tent and on the other side, I see Jackson falling forward,” Wagner said. “So I had no idea if he fell ahead of the line or before the line. So I ran back to look at the board, and I’m hearing people screaming, it’s either Mercer or Boyle. I couldn’t tell who it was until I saw his name on the board. Only thing I could think: ‘That’s awesome.’”

Cox said he wasn’t happy with his performance as a sophomore at the state track meet in 2017 — he placed fifth at 1:59.55 — and this summer he committed to being a better runner.

“This season, I was a lot more dedicated in summer training for cross country,” Cox said. “Coach Donna Anderson, she really helped us get out there. This season, it was my year. I was disappointed with my 800 finish last year but I was ready to get it this year. I knew this could be our state champ year, so I just wanted to go out and give it my all.”

Cox and Divine both gave it their all — and shared an embrace after the meet. Divine was one of seven Mercer athletes integral to the Titans placing second at state.

Divine came over to Cox when both teams were celebrating on the track and said, “You’re going to do big things again next year. I know it.”

Wagner knew about Cox’s potential two years ago. It was early in the track season and sprinters were working on the 200 meter dash.

Cox, a distance runner, was cooling down with the distance team when they saw the sprinters on the track.

“One of the kids asked why they couldn’t run in the (sprinters) group. And I said ‘you guys just can’t run that fast,’” Wagner said. “We were in groups and you have to hit a certain time. One of them said, ‘yes I can.’ I thought it was someone else. I didn’t know it was Jackson, and I said, ‘no buddy, you can’t. You can’t run with that group.’”

Wagner turned around to coach the 200 group and saw Cox finishing the 200 on his own. He threw his watch at his coach, showing a time worthy of running with the sprinters.

“He makes the time that the sprinters needed to, he takes his watch and tosses it to me,” Wagner said. “He kind of looked at me like, ‘yeah. Go eat that coach.’ I thought to myself, ‘OK. I like that attitude. This guy is blue collar and he’s going to be great to motivate.’ I told him he couldn’t and BAM! He did it. When I saw that grit and determination, just that attitude of ‘You don’t think I can do it? I can do it.’”

The state 800 run two years later reminded Wagner of a freshman that wanted to prove his coach wrong. He didn’t take it as a runner disrespecting authority, and Cox didn’t mean it that way. Wagner saw a runner who wanted to prove he could run with anyone.

“At the beginning of this season, I was trying to think of a motto,” Wagner said. “I told the kids at the beginning of the year, on T-shirts it’s all about me. ‘I’m the best, I got skills.’ But they never show the heart, the hard work four hours before. Our motto was ‘The Next One,’ but every practice, we said ‘Winning hurts.’ And we proved it (at state). We got pushed to our max by Mercer, Paducah, Highlands, John Hardin, all of them.”

That 800 finish was one of many victories for Boyle — but Cox said he was simply thinking about the need to win his events.

“It just says that we’re here, we’re ready to work and it takes a lot of pain, a lot of practice, but we’re willing to do it,” Cox said. “The right people and the right coaches willing to give it their all, you can do anything.”

“At the end of the day, you’ve got to be willing to hurt more than the other guy. That’s Jackson,” Wagner said. “We’ve talked about that several times. You can’t hurt 87 percent and quit. You’ve got to know what it’s like to hurt 100 percent and keep going. Don’t think about your instincts, you’ve just got to go get it.”