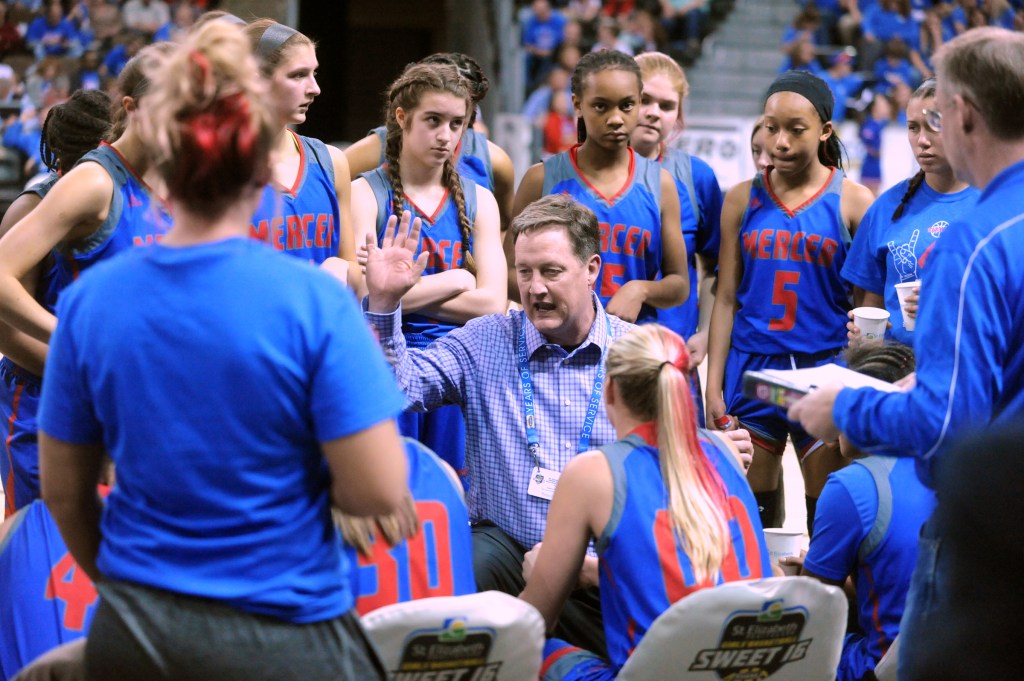 Chris Souder has stepped down at Mercer County.

The most successful girls basketball coach in Mercer history will start a new chapter, stepping into a new role as assistant coach at Indiana State University.

“It just kind of worked out as the perfect storm for me: Being able to win back to back state championships, there’s very few coaches who get to step away from a job that they love and step away on top,” Souder said. “It is sad to leave those kids and the program but it’s a great opportunity for me and my family, it’s something that I really couldn’t turn down.”

Souder will be joining Vicki Hall’s staff at Indiana State. Hall was previously an assistant coach at Toledo University.

“It’s a new opportunity, it’s great. I am nervous,” Souder said. “My wife kind of laughs at me, I don’t like change. And this is about as big of a change as you can get. But we tell our kids all the time to get out of your comfort zone, and she basically was saying, ‘you need to heed your own advice.’ I’ll try to bring some stability, give them an instant recruiting credibility in Kentucky. I know Kentucky kids, I know Kentucky basketball. They don’t have any Kentucky kids right now.”

Souder will leave Mercer with more than 450 wins across 19 seasons. He started in 2009 and has five 12th Region titles, including the last four. The Titans have won more than 97 percent of district games and more than 80 percent of region games with Souder at the helm.

“I could only wish to have this career,” Souder said. “It’s really neat to see what we’ve accomplished here. You’re only as good as the people around you. I’ve been blessed here, it’s not only good players, it’s a good staff, good administration, athletic directors. I’ve had the full gambit of support and that’s what you have to have to build a championship program.

“They’ve left me alone to build the program, and I’ve just been blessed to be able to stay here 19 years and I enjoyed every second of it. I could probably go another 19 years if I didn’t have this opportunity. I just need to try, I was just afraid of passing it up, it’s a small window at my age and that kind of thing. I’m just excited to get this opportunity.”

The Mercer County athletics department agreed with Souder on his departure.

“It’s certainly a bittersweet day for Mercer County Athletics,” the school said. “While we obviously hate to lose coach Chris Souder, we are excited for him and this opportunity to coach college basketball at the Division I level. We are truly thankful for his leadership over 19 seasons, including the Lady Titans’ recent historic success. Replacing Chris Souder is a formidable task, but the Mercer County athletic department is committed to finding the right person to maintain the established excellence expected of the Lady Titans’ basketball program. That process will begin soon.”

Souder said it was a dream of his from when he started coaching to move up to the college level.

“It’s like I told the kids today, it is bittersweet. I love this program where I’m at, it’s just rare anymore that a coach is anywhere for very long,” he said. “I’ve been here for 19 years and I’ve tried to build the program the right way. It’s sad in that respect, but just like I told the kids today, they’ve got dreams of playing college basketball and I’ve got dreams of coaching college basketball. I’ve been like that since day one. I just knew when I started coaching and teaching, I knew I had to get to where I have a pension. There’s no sense even talking about it until I got to this point.”

Souder said that he’s just excited to get back in the gym — this time as a full-time coach.

“(Hall) likes the style that we played at Mercer, so she wants me to help on the offensive side, think outside the box,” Souder said. “That’s how we played at Mercer. Then I’ll just do whatever they ask me to do, learn that end of it. I get to do basketball things all day, which is new for me. It’s a new role, I’m not scared of being an assistant coach, I haven’t been an assistant coach in 25 years. I’m not worried about that, there’s no ego issue. Coach Hall was highly successful as an assistant coach at Toledo, they had a great program there. I’m just excited to go to that, learn under her.”

Souder leaves Mercer after its third-straight 30-plus win season. The Titans graduate all five starters but will return Toni McCombs and Channing Lewis, both of whom were integral to the Titans’ run this season.

“The program is in good shape. That’s what we tried to do, we wanted to build a program and not just a team,” Souder said. “That’s what we’ve been building for, and we’ve got good young kids, we’ve got a good returning nucleus. I told them today, we’re on top of the mountain and you’ve got to fight like heck to stay up there. It’s hard to stay up there and we found out last year just how hard that is. They’ll be in a different position next year, they may not be the top team in the region but they’ll definitely be a team that will be dangerous come tournament time with the experience they have. All of those kids have two rings and you can’t put a price tag on that.”

The coach said he’ll be keeping close tabs on the Mercer program while in Indiana.

“I’ve loved every second of it,” he said. “I told the kids, I’ll be watching and following, and who knows, I might be recruiting some of them here soon. Just looking forward to a new chapter of my life. I appreciate everyone, my phone has been blowing up today. It just shows what kind of community we live in.”