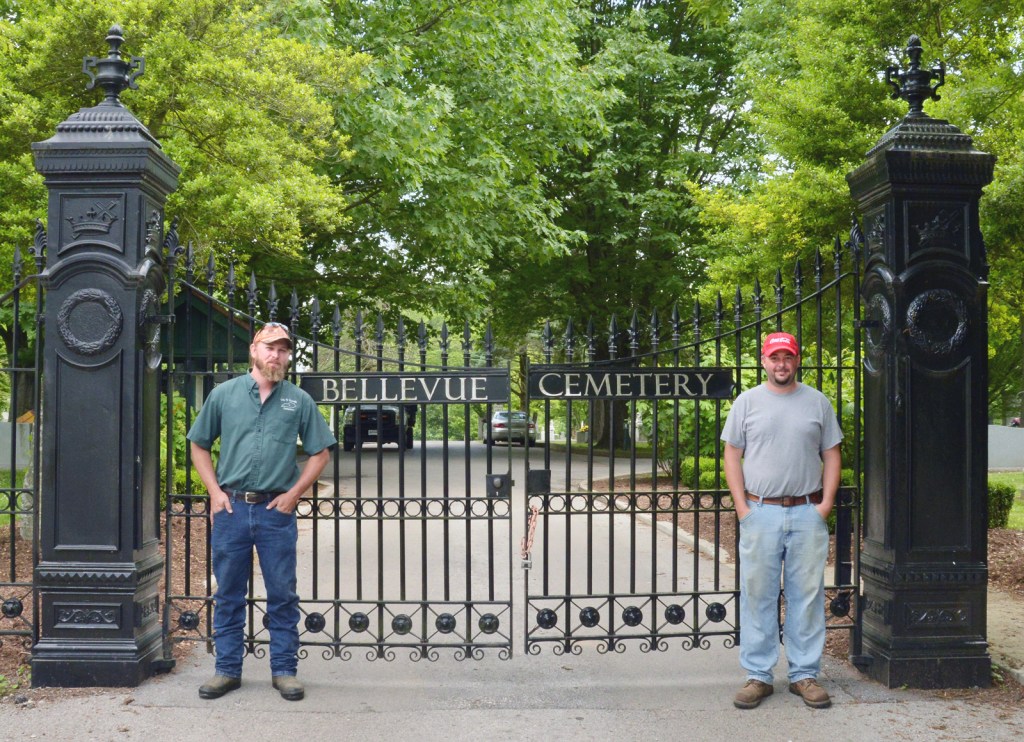 (Robin Hart photo) From left, Jason Turner is the Danville Cemeteries supervisor and Brad Miller is the one-man crew.

Memorial Day weekend is one of the busiest times of the year at Danville’s Bellevue Cemetery, “So we make sure it looks the best that we can possibly get it,” said cemetery supervisor Jason Turner one day last week.

(Robin Hart photo) Jason Turner carries the tools he and Miller need to dig a small grave for a family to place their loved one’s ashes in.

Like many old cemeteries, Bellevue is shaded by a variety of mature trees and sprawling shrubs. Turner said he may accidentally overlook something he sees as a small issue — like a drooping branch hanging too close to a gravestone. But a family member sees it as a huge problem. Turner said he understands it’s an emotional issue for many people, so all they have to do is point it out and he’ll take care of it.

Turner and his one-man crew, Brad Miller, do year-round maintenance, internments and exhumations at Bellevue and Hillndale cemeteries. However, the city contracts out the mowing and weed eating, Turner said.

Keeping up with Bellevue’s 30 acres and Hillndale’s 14 acres is, “A lot of land and a lot of stuff for two people to cover,” Turner said.

Plus, “We try to help people out as much as we can,” Turner said. Like assisting an elderly lady clean a gravestone or helping a monument company set a stone. 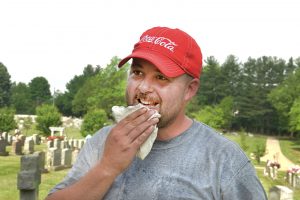 Miller said they had already completed some of the bigger jobs on their to do list, so they were spending last week sprucing up the two cemeteries in preparation for the anticipated heavy traffic coming in during the Memorial Day weekend.

Miller said in the days leading up to the holiday, many people are replacing faded flowers with fresh, bright ones, and this makes more debris for the two men to carry away.

This time of year, sometimes they travel around the curvy narrow paths on their big yellow dozer twice a day just to pick up garbage, Turner said.

Clinging to the side of this large machine, Turner jumps off and empties a large can full of fresh flower boxes and wrappers as Miller stops the machine.

Both guys walk through an historic section of the cemetery and pickup other wilted and brown plants that need to be thrown away.

The most important job, however, is getting ready for a funeral, Turner said.

Every day and every grave is different in the cemetery, Turner said. One grave may be in soft ground and take only an hour or less to excavate. The next one they may hit solid rock and takes them three hours. He said one particularly difficult grave took him three days to complete.

One day they may have three calls scheduling burials on the same day, so he’ll work with the funeral homes to coordinate services so they don’t overlap.

Most of the time, Turner and Miller use a trackhoe to dig a grave, but when the need arises, they dig small ones by hand — those for cremations and for babies. Those are really hard, Miller said. 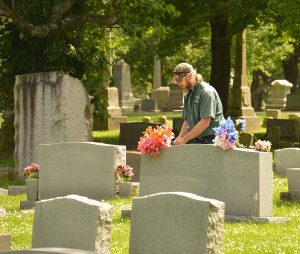 Turner said when a funeral procession enters the cemetery, they stop whatever they’re working on and respectfully keep their distance.

Once, Turner was asked if the decedent’s grandchild could place the urn of ashes into the grave — Turner said he didn’t see why not. That young man had more of a right to do the honor than he did, Turner said.

But it takes at least four people to lower a vault and casket into a grave.

Turner has worked for the cemetery department for about 12 years, while Miller has been there about a year and half. And both men have buried friends, classmates and family members.

They have also buried acquaintances they’d gotten to know who were regular walkers in the area.

“You never know who you are going to run into,” Miller said. Lots of times when this happens, the family feels a lot better when they realize they personally know who is burying their friend or family member, he said.

Turner said people don’t really think about the cemetery workers and how much they do in the background during these extremely emotional times.