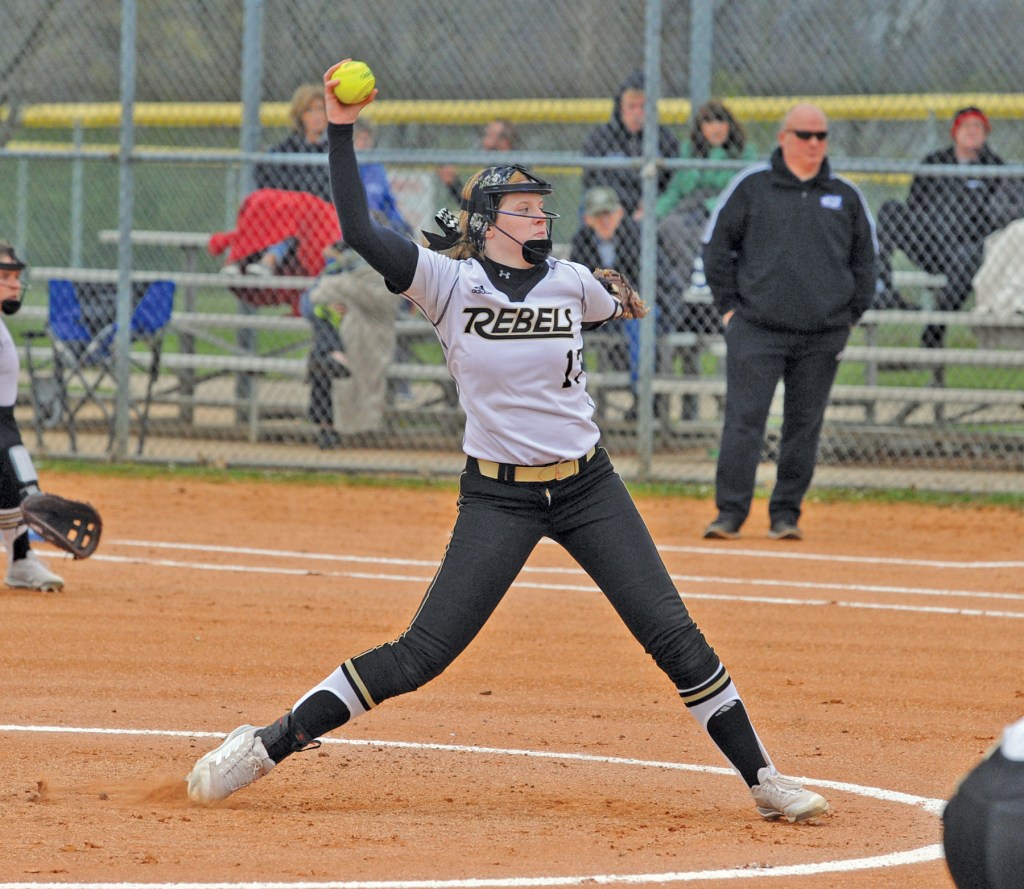 There has been no announcement as to who will be Boyle County’s starting pitcher in the regional championship game, and none will be forthcoming until the lineup card is filled out. But there are two very good options.

The Rebels have a pair of pitchers who are very different when it comes to style and stuff but who have produced very similar results.

Katy Grace Chadwell and Kelly Lay are consistent winners who have helped No. 19 Boyle move to within one game of defending its regional championship. The Rebels will play No. 20 East Jessamine at 7 p.m. today at Pulaski County in the 12th Region Tournament final, which was pushed back one day after being rained out Wednesday.

There may be better pitchers out there, but Boyle coach Brian Deem really likes the Rebels’ 1-2 punch.

“Yeah, I kinda do,” Deem said. “We have two pitchers that can keep anybody in the state off balance.  We’ve been in a lot of games with teams that are putting a lot of double-digit numbers up – we haven’t won them all – and we kept them down.”

So which pitcher will start in Boyle’s biggest game of the season? It could be Chadwell, a junior who has thrown two-thirds of Boyle’s innings this season and has pitched in many of its biggest games. Or it could be Lay, a senior who has more wins and almost as many strikeouts in 11 fewer appearances.

Each pitcher is a big fan of the other, and both are glad they are part of a team with two good pitching options.

“It’s always a good thing if a decent team has two pitchers,” Lay said. “Me and Katy have worked well together, too. We boost each other up, and when one of us gets knocked down we’re always there to pick the other one up.”

“Having two is great, honestly,” Chadwell added. “Especially when one’s down, it’s so good to have the other come in in relief, even just to throw off the batter with different speeds and different pitches. It just works great.”

Assistant coach Jessica Speake, who works with the team’s pitchers, thinks so, too, especially because both girls are willing to work hard to improve themselves and to help the team win.

“It’s every pitching coach’s dream,” Speake said. “This year they have been so coachable and willing to go that extra mile.”

They have two very different ways of getting the same results.

“Both have a different style of pitching. Both of their go-to pitches are complete opposites,” Speake said. “They like to work differently, and that’s something that we’ve had to really work on together so that we’re in the right groove, on the same page.”

Speake said some of the credit for that continuity goes to catcher Madison Robbins.

“That’s something that Maddie is amazing at behind the plate, because she’s able to go from one pitcher working one way to another that’s a polar opposite,” she said.

As Speake said, both pitchers like to put their best pitches in different places.

“Kelly’s more of a person that spins the ball. She’s inside and high, and I’m more outside and offspeed,” Chadwell said.

That leads to more strikeouts for Lay.

“I’m more of a spotting pitcher that strikes batters out,” Lay said.

Hitters put the ball in play much more often against Chadwell, who relies on Boyle’s defense.

I trust them 100 percent,” she said. “You just have to have a good defense behind you, and we’re blessed to have that.”

They also have the ability to adjust on the fly.

“Their knowledge of the game is up there, so they are able to make adjustments when they need to,” Speake said.

Sometimes they do their best work together, as was the case Monday in Boyle’s first-round regional win over Rockcastle County. Chadwell started that game, and Lay came on in relief to close the door.

“What happened Monday was a prime example of how important those two are,” Deem said. “Katy pitched OK but didn’t pitch her best, and Kelly came in and shut it down for us.”

Each girl enjoys watching the other work in the circle.

“I love watching Katy from second base,” Lay said. “She does such a great job. She hits her spots, she has the speed, she really keeps batters off their feet. She keeps the game interesting.”

“I’m usually in the dugout when she’s out there, and it’s good to cheer her on,” Chadwell said.

“We boost each other up, and when one of us gets knocked down we’re always there to pick the other one up,” Lay said. “Me and her make a good duo.”

Speake said the fact that the two girls support each other strengthens the team.

“They’ve got each other’s backs,” she said. “You don’t get that all the time. Sometimes you’ve got pitchers who aren’t on the same page. When you’ve got two pitchers that are cheering on each other and hoping for the best for each other, that’s when a team can really be successful.”

Both pitchers said Speake, a 2010 Garrard County graduate who had a 0.65 ERA and struck out 918 batters in a five-year career that included two regional championships and three state tournament wins, has helped tremendously with their development.

“She helps with everything, and she knows what we need personally,” Chadwell said. “She’ll work with one thing with Kelly and another with me, so when we get together it works.”

“Coach Speake does an amazing job. Practices are fun, and she prepares us well,” Lay added.

Speake was inducted into the Kentucky Prep Softball Hall of Fame two years ago, and the two girls said she works plenty of stories from her playing days into her workouts.

Speake said both of these pitchers have a bright future, on or off of the diamond. Lay will attend Lindsey Wilson College, while Chadwell has one more year at Boyle.

“Kelly is going to finish this year out as strong as possible, and she has had a fantastic year,” she said. “And KG is going to keep on trucking. She’s got one more year, and I see a lot of bright things in the future for her.”

But which one will take the ball tonight? Speake said the decision likely was made even before the postseason began.

“Most of the time, we’re looking at our games two weeks ahead. We’ve already got an idea, and it’s usually already decided,” she said. “But I’m going to tell you now, I’d be confident throwing either one of them.”