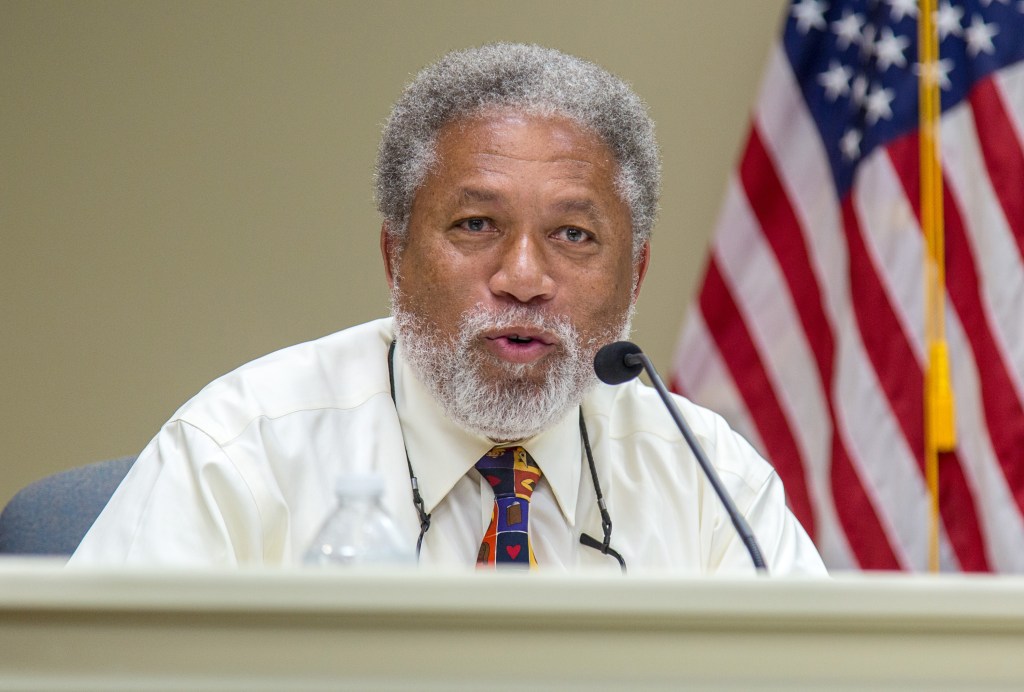 Danville City Commissioner J.H. Atkins made a motion Tuesday night to rescind raises for members of the city commission, but was told the commission lacked the authority at this point in time to do so. (Photo by Ben Kleppinger)

Commissioner tries to undo salary increases, but learns he’s out of time

Danville City Commissioner J.H. Atkins hoped to undo a vote to raise elected officials’ salaries, but those hopes were dashed on the rocks of Kentucky law Tuesday night.

Atkins, along with Danville Mayor Mike Perros and fellow Commissioner Denise Terry, voted into law salary increases for the mayor and commissioners who take office Jan. 1, 2019. But Atkins said Tuesday he wanted to rescind the ordinance and cancel the raises.

Atkins was a swing vote on the issue initially, voting against it before being persuaded to support the measure. After the commission passed the salary increases, police officers and firefighters who work for the city packed the city commission chambers on May 14 to ask whether they would be getting raises, too. Atkins told them the city would look into improving salaries and benefits, then added, “I was the third person on the vote. It was a 3-2 split. Have I lost any sleep about doing that? I can’t honestly say I haven’t; I’d be lying to you if I told you I did, but I haven’t.”

Five days later, The Advocate-Messenger ran a letter to the editor from Atkins, who apologized for his “insensitive comments.”

“It was a mistake for me to say I hadn’t lost any sleep over the issue of salary and benefits as this is an on-going issue of concern for me. But rest assured that I have lost a lot of sleep since making my insensitive remarks,” Atkins wrote.

Tuesday night, Atkins made a motion to rescind the salary increases — a move he said was “my attempt to regain my status of being a public servant and not a politician.”

Atkins motion was seconded by Commissioner Kevin Caudill, a staunch opponent of the salary increases. But then City Attorney Stephen Dexter spoke up. 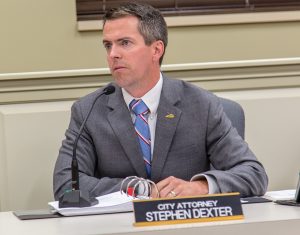 Danville City Attorney Stephen Dexter said Tuesday that city commissioners lacked the authority to change elected officials’ salaries at this point in time and if they voted to do so, he would advise city staff against making changes. (Ben Kleppinger photo)

“I appreciate the spirit of your motion and the second, however I just want to alert the commission that the statute on the establishment of salaries … is clear that the compensation must be fixed by the first meeting in May,” Dexter said. “… An effort to rescind the prior establishment of salary I think would not be something you have the statutory authority to do at this point.”

Dexter said commissioners could do anything with the salary they are paid, including donating it back to the city. But the commission can’t change the rate at this point in time.

“I understand and respect your motion, however, I would be in derelict of my duties if I didn’t inform you of that prohibition,” Dexter said.

“So what you’re saying is to do otherwise would be illegal?” Perros asked.

“You didn’t say it was illegal; you said we lack the authority, right?” Atkins asked. “… So to vote on this motion, is that appropriate?”

“I would take the position that you don’t have the authority,” Dexter said. “… If the … vote failed, you wouldn’t have any problem, but I would think that the mere act of trying to change the compensation of an elected official is in direct conflict with the statute.”

“… If I understand you correctly, we cannot take this action,” Perros said.

“I would say that you lack the authority to approve that motion,” Dexter said.

Perros said he believed Caudill’s second needed to be withdrawn and Atkins’ motion either withdrawn or allowed to die for lack of a second.

“I can call for the question on the motion,” Atkins said, suggesting he could call for a vote anyway.

“If the question is called and it’s voted on and it dies, there’s no problem. But if it were to pass, I would say it’s illegal,” Dexter said.

“Either way, regardless of the outcome, it’s an irrelevant vote. Is that what your saying?” Perros asked.

“That’s my legal position. Well — that’s for you to determine the relevancy. I’m just saying the legality of it, you lack jurisdiction to do that,” Dexter said.

“You like to complicate my life, don’t you?” Atkins asked.

“I know, that’s alright; we’re still buddies,” Atkins said. “If the motion passes … what happens if we pass it?” 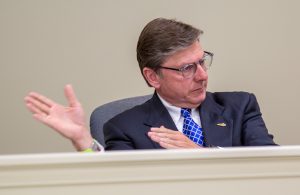 “I want the attorney to answer that question,” Atkins said.

“My position to staff would be that it would not be lawful for them to alter the compensation that has been previously established by the statutory deadline, despite your motion,” Dexter said.

Atkins further clarified with Dexter that he could donate his paycheck however he would like to.

“You can take that issue to whatever degree you wish and you can make that public or not,” Dexter said. “But the city will be required to pay compensation as established.”

“History is history and you learn from your mistakes,” Atkins said. “I thought this was one of those opportunities where I could say to folks, ‘I made a mistake and I’ve been afforded the opportunity to change and correct my mistake.’ But the legalities of what you’re saying is that you’re not allowing me to do that — you’re not, the law’s not (letting me),”

Perros asked if Atkins would like to withdraw his motion, but Atkins declined. Caudill said he would withdraw his second.

“We have not addressed all employees the same as we have addressed the commission and that’s what my issue is at this point,” Atkins said. “And I’ll leave it at that. I do withdraw my motion.”

The increases were originally recommended by Danville City Manager Ron Scott as part of the 2018-19 draft budget, which he presented to the commission April 26. Scott said at the time the last time the salaries were increased was 2006.

Atkins attempt to rescind the commission raises followed a review of Danville’s draft 2018-19 budget, during which Scott announced he would be conducting a study of all city employees’ salaries and preparing a report by the end of the year.

“Next year, we’re going to have a comprehensive and honest look at our compensation package for all employees and I intend to try to complete that by Jan. 1 of 2019 so that we will have adequate time to have discussions of those … as it might affect the preparation of the next year’s budget.”