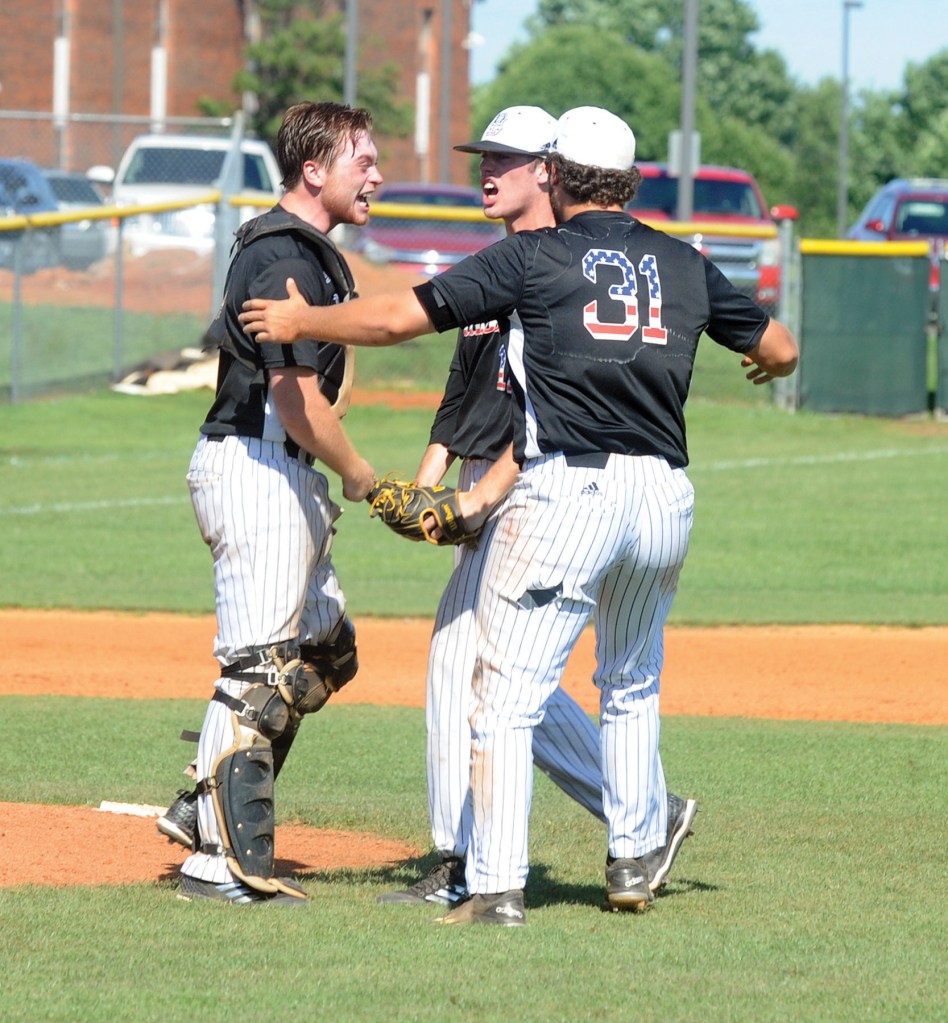 NICHOLASVILLE — From the start of Sunday’s championship game, Boyle County’s offense was ready to go.

Against one of the best pitching staffs in the state, the Rebels won 11-3 thanks to a six-run first inning against Kentucky commit Hunter Rigsby.

“I’m really proud of our guys, from the start they were ready to go,” Boyle County head coach Kyle Wynn said. “We talked about it earlier, it was ‘tell us when we’re playing, we’ll show up and get after it.’ Our guys did. That’s all on them. Some things happened with pitching changes, delays, all that was going on, and we didn’t back down. We controlled ourselves, worried about ourselves and it was great to get out the gate early on a good pitcher.”

Boyle chased Rigsby in the first inning, and from the first at-bat the Rebels were locked in: Leadoff man Grant Hotchkiss walked after a full count; Hunter Mason singled and advanced to second on the throw; then Ty Dragan hit a sacrifice fly to score the first run of the game.

Alex Sergent walked to put two runners on base, and Boyle’s starting pitcher Karson Thompson unloaded the bases with an inside the park home run to put his team ahead 4-0.

Before Sunday’s contest, Rigsby had the third-most strikeouts in the state (116) over 53.2 innings and an 8-1 record.

“The biggest thing is, we didn’t hurt ourselves,” Wynn said. “When we don’t hurt ourselves, I like our chances. Sometimes when our offense isn’t working, we’re getting ourselves out. But in that first inning, we were swinging at good pitches and when we saw a pitch we liked we took advantage.”

Thompson shut down the Rockets in order in the second inning, which Wynn said deflated the Rockets.

“We know Karson has that in him,” the coach said. “He kind of had a rough outing in that district championship game, but he was hot in the three games before that. That’s what he can do on the mound, he might have just gotten tired in the fifth. But for him to throw up those zeroes and for us to continue that lead, that was big. It allowed us to extend it versus them getting back into it.”

“Grant, he’s a great leadoff hitter and Hunter hits the ball well and you can’t ask for more than that,” tournament MVP Ty Dragan said. “It takes the pressure off of me, because even if I don’t get a hit we’ve got Alex right behind me. Then Tristen, then Karson. Our whole team can hit.”

Dragan finished the region tournament 6-for-8 at the plate with six runs, a home run and eight RBIs. But he said a different player should’ve won tournament MVP.

“That Southwestern game, it took Alex, he had to get a little mad at us and after that we started hitting. Karson came up clutch in that game too,” Dragan said. “In my opinion, I don’t think I should have gotten MVP, it should be that kid right there.”

Thompson finished the region tourney 5-for-10 with nine RBIs, a home run and a run scored.

Thompson continued to cruise through the Rockcastle lineup until the fifth inning, where he made way for senior Sam Tiller. The Rockets would score all three of their runs in the fifth, extending the game for two more innings.

“Sam was ready to go,” Wynn said. “Obviously we needed someone to come in and close the door, what better way than a senior?”

Tiller said he and his teammates have come together at the right time.

“We really are, it feels like we’re clicking at the right time,” he said. “All of our guys in the lineup are strong right now, our arms are fresh and everyone is going out there playing for each other and playing to win. I think that’s the biggest thing, we kind of had some problems earlier in the season but we got things figured out, we’re brothers, we’re going to have each other’s back through the whole tournament.”

Wynn said the Rebels were wide-eyed during last year’s state tournament appearance but doesn’t expect that to be the case this year.

“We’re ready to go, the biggest thing is we’re trying to get back and make a run this year,” Wynn said. “Last year we were kind of just getting our feet wet, we hadn’t won in 12 years. We were just kind of, more than anything, taking it all in. It just didn’t work out for us. Hopefully this year, with our experience, that will help us again. Back-to-back is a huge accomplishment.”