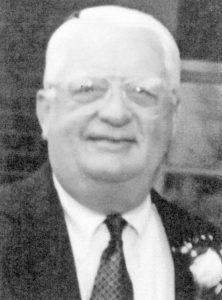 James Daryl Thompson of Danville, passed away on Tuesday, May 29 at his home at the age of 84.

Born June 30, 1933 in Mackville, Ky., he was the son of the late Dudley James Thompson and Lorna Lee Sparks Thompson. Jim was the husband of the late Mona Louise Minor Thompson. They owned and operated Fountain Valley Farm, which bred and raced standard bred horses. Jim graduated from Oneida Baptist Institue where his grandfather, Reverend D. Chester Sparks was president. Following high school he served his country as a navigator in the US Air Force from 1951-1955. He graduated from the University of Kentucky with a degree in finance. Jim retired from Farmers National Bank of Danville as Senior Vice President of Marketing and Business Development after 33 years of service. As a past president of the Danville Chamber of Commerce and a founding director and treasurer of the Boyle County Industrial Foundation, he was instrumental in the development of the Industrial Park in Danville. He received a commendation from former governor Edward T. Breathitt for his assistance in carrying out a highly successful industrial development program, which brought in new industry to Boyle County, as well as other parts of Kentucky. He was elected president of the Central Kentucky Chapter of the Bank Administration Institute, which was composed of 14 banks throughout central Kentucky. He was an avid golfer and served on the board of directors for Danville Country Club. He was also a life member of the University of Kentucky Alumni Association.

The funeral service will be held at 1:00 p.m., Saturday, June 9 at Trinity Episcopal Church. Rev. Terry Taylor will officiate. The family will receive friends at a life celebration from 2-5:00 p.m. at the Danville Country Club. Memorial donations are suggested to Heritage Hospice Inc. in Danville, Ky., or Standardbred Retirement Foundation at adoptahorse.org. The online guestbook is available at www.stithcares.com.