Softer side of Brass Band Festival on display at quilt show 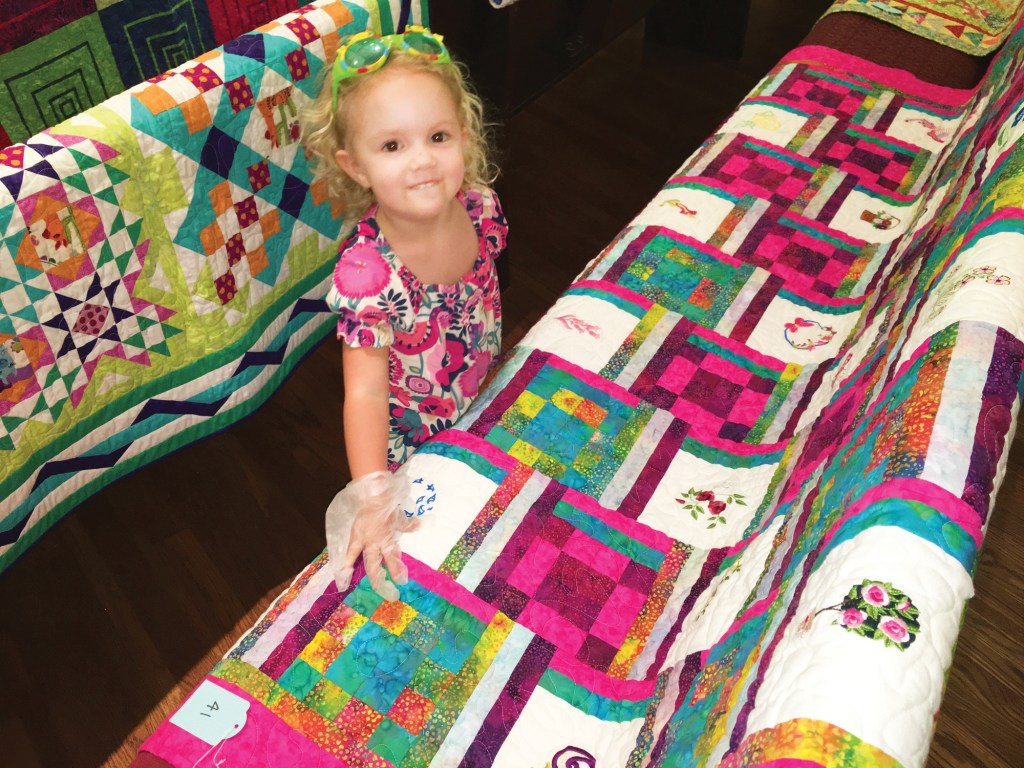 Campbell Jarnagin, 2, puts on gloves as instructed by mom Trisha before touching the quilts Sunday at the Great American Quilt Show. The exhibit volunteers say gloves are used to protect the pieces from bodily oils or dirt. (Photo by Bobbie Curd)

What exactly do quilts have to do with brass music? “Absolutely nothing…” says organizer Sue Ferguson, but the Great American Quilt Show returned this year, 100-quilts strong, all by local quilters.

“No, all kidding aside …” Ferguson says, the show has been a really unique addition to the festival. Much like the juried arts exhibit from years past, this is another form of art, appealing to people from all walks of life. 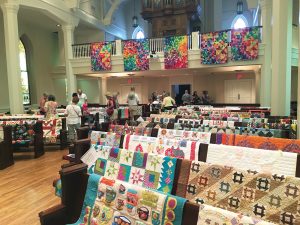 Quilts on display at the Danville Presbyterian Church Sunday. (Photo by Bobbie Curd)

When it first got started, they had to find the best, suitable venue and organizers knew they wanted a church. But they needed one that didn’t have a service on the Sunday of the festival.

“So this was perfect,” Ferguson says, standing inside First Presbyterian Church of Danville on West Main, which doesn’t have service since the Ecumenical Service is held the last day of the festival on the main lawn just a stone’s throw away.

Quilts are meticulously draped on every pew in the house, some hanging from the second floor balcony, with some unique signs thought up by Ferguson to dissuade from “unauthorized touching” — visitors are given gloves when they enter, which are required to be worn if handling the quilts. There are no ribbons or judging, Ferguson says, it’s simply an exhibit.

“These are just quilts, made by people and their families,” Ferguson says. “They’re wonderful and they’re cherished quilts. They may not all be award-winning quilts, but they are cherished.” 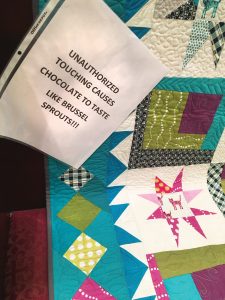 Quilt show volunteer Sue Ferguson came up with some intriguing signs in order to persuade smaller visitors to be careful around the quilts. (Photo by Bobbie Curd)

Visitors slowly stroll through, perusing the patterns and colors, and even sometimes getting a glimpse into someone else’s life, whether they know it or not.

“Sometimes it’s a reflection of the person and where they come from,” says quilter Joni Morgan, also a volunteer. Morgan shows her “Autumn in Boyle County” medallion quilt, which is just that — lush light green and vivid oranges, with a few touches of bright pink hues here and there, all set on a gray background.

“People can appreciate this type of art. It’s all hand-done, in a world where there’s lots of machine-made and overseas products — it’s nice, kind of fun to see something somebody you knew made,” she says. A few of hers are award-winning pieces, and she flips one over to show the prize-tag stitched inside.

Morgan says aside from the appreciation from visitors, the connections are also quite interesting — and not just among fellow quilters.

“We hear a lot of ‘my girlfriend made this quilt for me,’ or ‘my aunt quilts,’ or ‘my grandmother made this one for me,’” Morgan says. She says there are always stories, always accompanied with pictures they carry of the quilts on their phones. 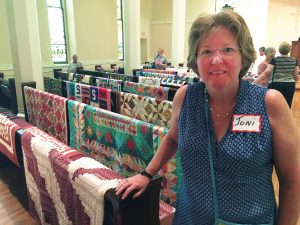 Joni Morgan, of Danville, has been quilting for about 15 years now. She volunteered to help with the quilt show and said she heard so many heartwarming family stories as a result of talking to visitors about their family quilts. (Photo by Bobbie Curd)

Some are family antiques; some are modern. Ferguson says patterns range from double-wedding ring, which is a “total classic pattern,” to more modern designs.

Morgan, who has been quilting for about 15 years, uses a more “improvisational” style. She walks over to another of her award-winners. It’s got a white background and zig-zag patterns on the side in different hues of blue and pink. The center of the quilt sports one small typewriter — a nod to Morgan’s background as a journalist for The Advocate-Messenger in the ‘80s.

“This really brought me back to the day — I sat right next to Herb Brock (longtime journalist, now retired), and he never learned the keyboard. He used these two fingers, and he would just pound away at that keyboard with his two fingers … He was the best typist I’d seen using two fingers like that…” The quilt also has a design of paperclips, and a cat and mouse (“You know, the whole cat-and-mouse thing … although it’s a wind-up mouse, it’s a clever mouse,” Morgan says) and matches. Morgan says back when she worked at the paper, staffers were allowed to smoke in the newsroom.

That’s a story about her many may now know, Morgan says, nor have a reason to ask without seeing that quilt.

“Mine are known for being more modern. Mine are kind of obvious. Most people know them due to the kind of vibrant colors I’m drawn to,” Morgan says. Ferguson calls Morgan’s quilts “uniquely modern.” Morgan says if she doesn’t know quite where she’s headed with a particular design, she simply starts from the center and works her way out. 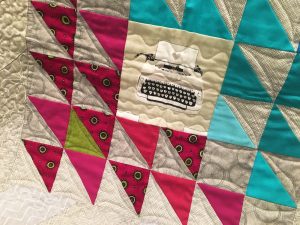 A quilt Joni Morgan made included in the Great American Quilt Show is a nod to Morgan’s years as a journalist for The Advocate-Messenger. (Photo by Bobbie Curd)

“Some people are just called by particular colors,” Morgan says, looking around the room. “There’s all different styles and a huge range. Some like more historical fabrics, like Civil War fabrics. They’re all so unique.”

The women say many visitors would be drawn to multiple quilts from the same artists, and had fun scrolling through their names and tracking down additional pieces on exhibit by them.

“This is something that’s a process. It takes a long time to quilt, and I think people also appreciate that aspect of it,” Morgan says. She’s made over 50 quilts and had a solo exhibit of 34 pieces a couple years back at the Community Arts Center.

“It allows me to be creative — truly,” Morgan says.

Although those who exhibited in the show had the option, only about a dozen out of the 100 quilts were actually for sale, Morgan says, and some of them sold. The money goes straight to the quilter, as there’s no fee charged to enter the exhibit.