The art of paper quilling has been around for hundreds of years, but Danville’s Lily Phillips, 11, learned the craft to show it off during the Kids Art Fest at the Great American Brass Band Festival.

She settled on the art of paper quilling during a visit to a craft store. 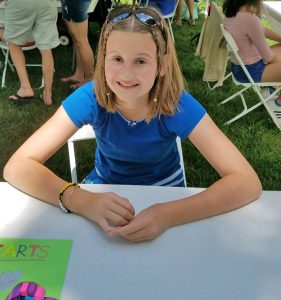 “A lady told me about it and I looked it up on Pinterest and YouTube,” Lily said. That was a few months ago, and she’s been busy using the craft to make items to sell at the festival.

“Once you get started, it’s pretty easy,” she said. Some of her creations, like the emojis and hearts, took a few hours.

“People love emojis,” she said, a point a friend made to her when she was trying to figure out what to make.

The trumpets only took about 45 minutes, but, “the trumpets were hard,” Lily  said. Those were made especially for GABBF.

Out of all the things she made, she said the grapes were probably her favorites because the paper had to be wound tightly.

The daughter of Bill and Kimberly Phillips of Danville, Lily is a student at Danville Christian Academy. She said she loves to be outdoors, to ride her bike and to travel.

Besides paper quilling, Lily loves to create. She knits, sews, does needlepoint, paints, draws, weaves, makes bracelets on a loom and is a budding photographer. 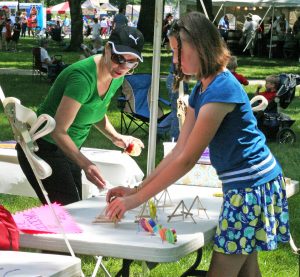 She’s got stories for how she got into each craft — knitting is because a friend wanted to do it; weaving because her grandma got her started; and needlepoint because she saw the kit in the store and just wanted to try it.

Her favorite way to create is drawing. She started drawing when she was two. Last year, Lily’s art was used for the poster for the Kids Art Fest during GABBF.

She said she continues to create and try new hobbies simply because, “I just really enjoy it.”