Some rain threats, but GABBF’s 29th weekend was sunny fun 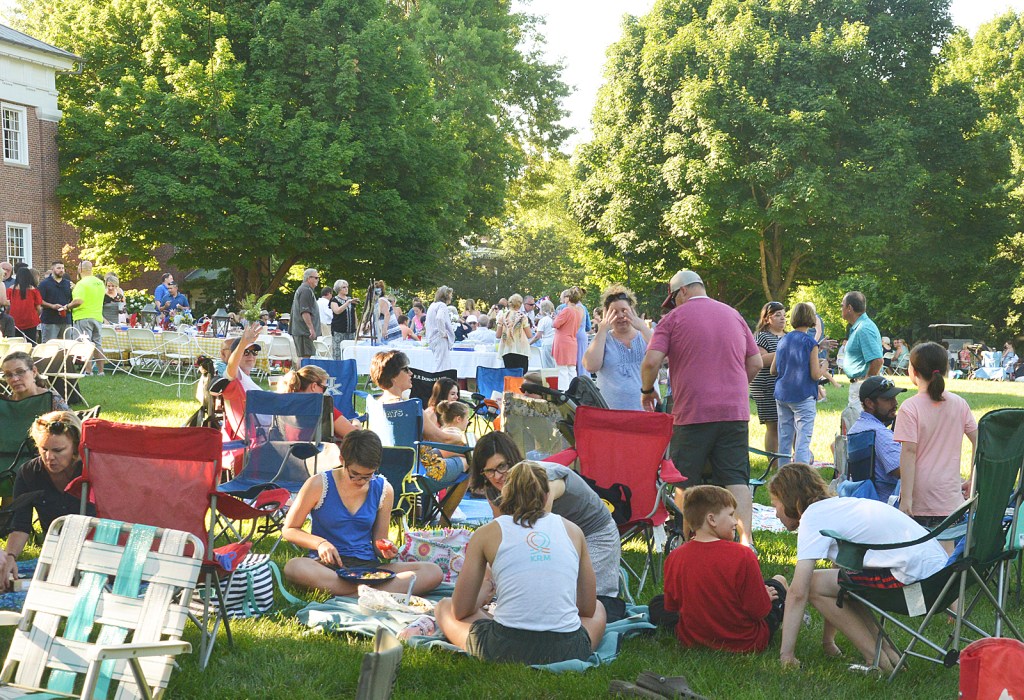 (Robin Hart photo) Many festival-goers enjoy their picnic in the shade on the hill above the main concert stage.

The Great American Brass Band Festival swept through town this past weekend, bringing families and friends together in a plethora of offered activities. Although each day had a threat of rain, the festival’s new executive director says Friday evening, Saturday and Saturday evening boasted quite large crowds.

“Sunday may have been a little lighter due to the weather threat early on …” says Robin Cooper. “Overall, I would say it was a successful and well-attended weekend. It was fun to see so many people hang around all day and then into the evening — not really wanting to leave because they were having so much fun.”

As of now, an approximated guess of the total visitor count is anywhere from about 25,000-30,000, but that’s unofficial; the specific stats are still being added up. 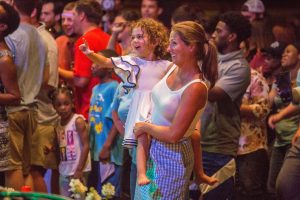 (Ben Klepplinger photo) A crowd gathered by the stage to dance enjoys music by the Stooges Brass Band.

“We ensured we had a rain plan for most events,” Cooper says. After all, she says, the festival organizers and the community plan for this event all year long. “Not to mention the bands and festival attendees who make plans far in advance, so we still want the show to go on as much as possible, even with rain.”

But this is a summer festival that is meant to be outdoors, Cooper points out. “So, it was a tremendous relief each day to have sunshine and excellent weather. It was a beautiful weather — we were very fortunate.”

The weather threat on Sunday morning was the biggest concern over the weekend — as of Saturday night, Sunday’s forecast wasn’t looking great. Cooper had already spoken with staff at the Norton Center, the rain plan location, and let staff know the festival would likely be using the space on Sunday for the church service.

By 5 a.m. Sunday, Cooper was checking the weather, and was on the phone by 6 with the artistic director, the stage company, Norton Center staff and the festival’s logistic manager.

“But by 7, the weather had cleared enough that we decided it was safe to keep the service outside,” Cooper says. Not many would realize the amount of readjustment the weather can cause on a festival of this caliber. “There was a lot of thought and communication behind the scenes that went into making that decision to keep the church service outside Sunday morning.”

Aside from some minor glitches that needed a cohesive team effort to straighten out, Cooper says her first festival as executive director has been a very exciting experience — and she says honestly, she’s had a lot of fun with it.

“It has certainly been new for me to plan an event of this magnitude, so I’ve learned a lot along the way, but I think it went well and we all — the staff, board members and volunteers — really enjoyed the planning and especially the festival weekend.”

Cooper says seeing all the work from the past several months come together was very rewarding. “And the best thing about this for me has been seeing first-hand what our small town can do working together,” Cooper says. The community comes together to fund a world-class music festival and countless volunteers work together to make it happen, she says — that’s priceless. 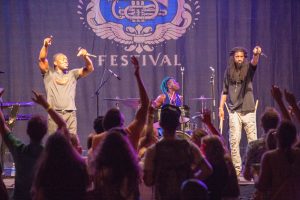 (Ben Kleppinger photo) The Stooges Brass Band gets the crowd amped up early in their performance. The band closed down the main stage on Centre College’s campus Saturday night.

But the organization behind-the-scenes isn’t the only scene that’s stuck in Cooper’s mind.

“Watching all the kids playing on the hill in front of Old Centre during the picnic until it got dark, and still not wanting to leave … Or the huge crowd in front of the stage on Saturday night, dancing and singing … “ Cooper says, about The Stooges’ performance. “I think the crowd would have hung with the band all night if they would have kept playing. But they had to get back to New Orleans that night.”