Tinker Doyle is returning to Danville. At least that is the story Rotarians were told by Liz Orndorff and Heather Henson on June 1.  According both speakers, interested parties can see “The Return of Tinker Doyle” nightly Tuesday-Saturday, from June 8 through June 23 at the Pioneer Playhouse.

The play is a sequel to “The Search for Tinker Doyle,” which opened at Pioneer Playhouse five years ago. Both plays were written by Liz Orndorff, the award winning local playwright. In the first play the mayor of Danville traveled from Kentucky to Ireland to woo a Sister City while his wife secretly looked up a long lost love. The old flame turned out to be a priest, and now that same Father Doyle is headed to the Bluegrass as cultural ambassador to Danville, Kentucky, a sister city to his home in Carrickfergus, Northern Ireland. 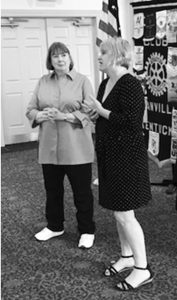 Photo by Dave Fairchild
From left Liz Orndorf and Heather Henson speak to Rotarians about “The Return of Tinker Doyle”.

As the audience learned from Heather Henson, the drama started a week before the play was scheduled to open.  Kieran Cunningham, who was cast as Tinker Doyle, and Rickie O”Neill, as a musician, were flying from Dublin to Danville over Memorial Day weekend.  Both men were to make several other appearances round town. Unfortunately they never got to leave the runway. At customs in Dublin’s airport they learned that work permits were required because they were to have been paid for their performances.

Heather Henson, managing director at Pioneer Playhouse,  says it never even occurred to the playhouse to apply for work visas for them since the visits in the past have been mostly part of a cultural exchange.  Cultural exchange visits do not require work permits. All her attempts to resolve the problems were unsuccessful.

In full panic mode, since the show was scheduled to start in 10 days, she elected to call upon a playhouse favorite, Daniel Hall Kuhn.  “We were just lucky, everything else aside, that Daniel was even available …” Henson said. “Daniel is one of those actors audiences ask for again and again. So we’re thrilled that he’ll be returning to fans who love him.”  Robby Henson, artistic director for the playhouse, has stepped in as a musician to round out the crowd scenes. Eben French Mastin is cast as Mayor McConnell and Patricia Hammond plays McConnell’s wife. Breandan Draper, of Lexington, whose father is Irish, will debut in the play as a guitar-playing and singing bartender.

The presentation ended with Draper performing two songs from the play:  1. “Carrickfergus” which is an Irish folk song, first recorded, under the name “The Kerry Boatman”, by Dominic Behan on an LP called The Irish Rover, released in 1965; 2. “Galway Bay” written by Arthur Colahan in 1947 and popularized by Bing Crosby.

The poetry of quilts: Lunch with the Arts program…