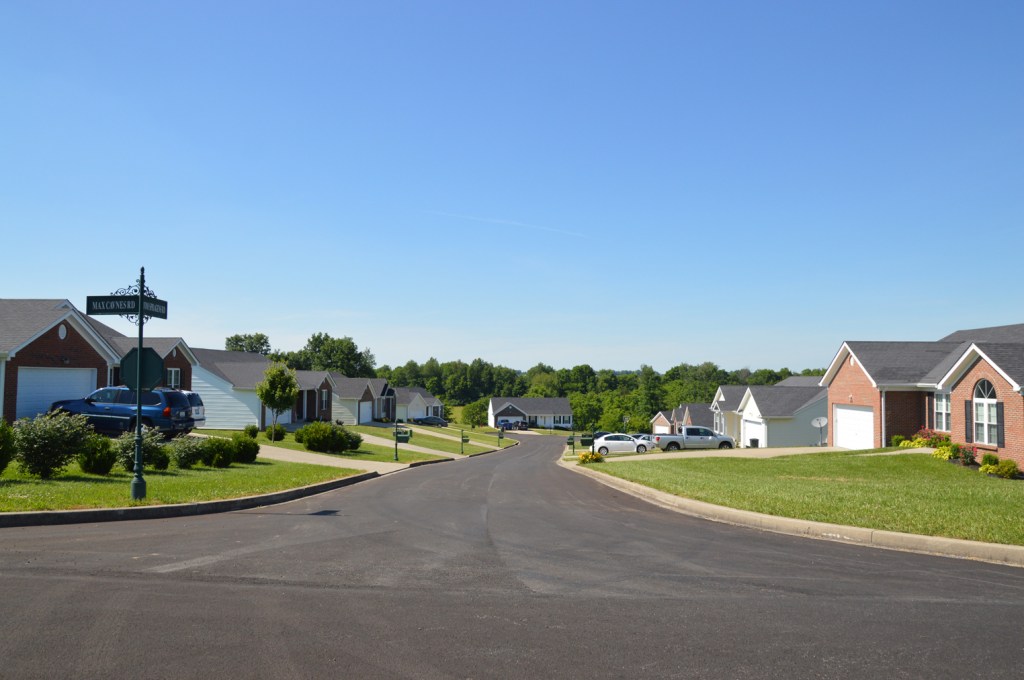 (Casey Craiger photo) Roads in the Hunt Farm subdivision now have final surfacing on them. The subdivision developer, Joedy Sharpe, will be constructing sidewalks on one side of the roads in the neighborhood next.

Paving of the Hunt Farm subdivision roads is complete and work can now begin on sidewalks, as the Danville-Boyle County Planning and Zoning Commission nears the end of a years-long dispute over completion of the neighborhood’s infrastructure.

The subdivision developer, Joedy Sharpe, has secured signatures from 39 of the 40 homeowners in Hunt Farm, agreeing to allow sidewalks to be constructed on only one side of the subdivision’s roads, P&Z Director Steve Hunter said. The original site plan for Hunt Farm included sidewalks on both sides of the road.

Stephen Dexter, Sharpe’s attorney, argued to the P&Z Commission Wednesday that having all but one of the homeowners on-board with the plan was more than enough support to proceed with the plan, which will be substantially cheaper for Sharpe than constructing sidewalks on both sides.

“The one lot in question just said they weren’t really interested in participating. We don’t necessarily know the reason — if they want a sidewalk or the don’t want a sidewalk — they just weren’t interested in participating for whatever reason,” Dexter said. “To have 39 of 40 of the lot owners is 97.5 percent of the subdivision who have agreed to the modified plan. In fact, it was remarkable how easy the waivers were to obtain and how quickly the people signed who said they did not want sidewalks to maximize their yard space and to not have them to maintain.”

The Hunt Farm subdivision restrictions allow any conditions to amended at any time by a two-thirds majority of land owners; 39 of 40 well exceeds that threshold, Dexter said.

The P&Z Commission is still holding almost $31,000 of Sharpe’s money from a letter of credit it cashed in 2011, after Sharpe failed to complete the subdivision during its first five years of existence. The commission had around $51,000 from the letter of credit; about $20,700 of that has now been used to put final surface on the subdivision’s roads.

The commission will hold the remaining balance until the sidewalks are completed at Sharpe’s expense, then release the funds back to him, Hunter said.