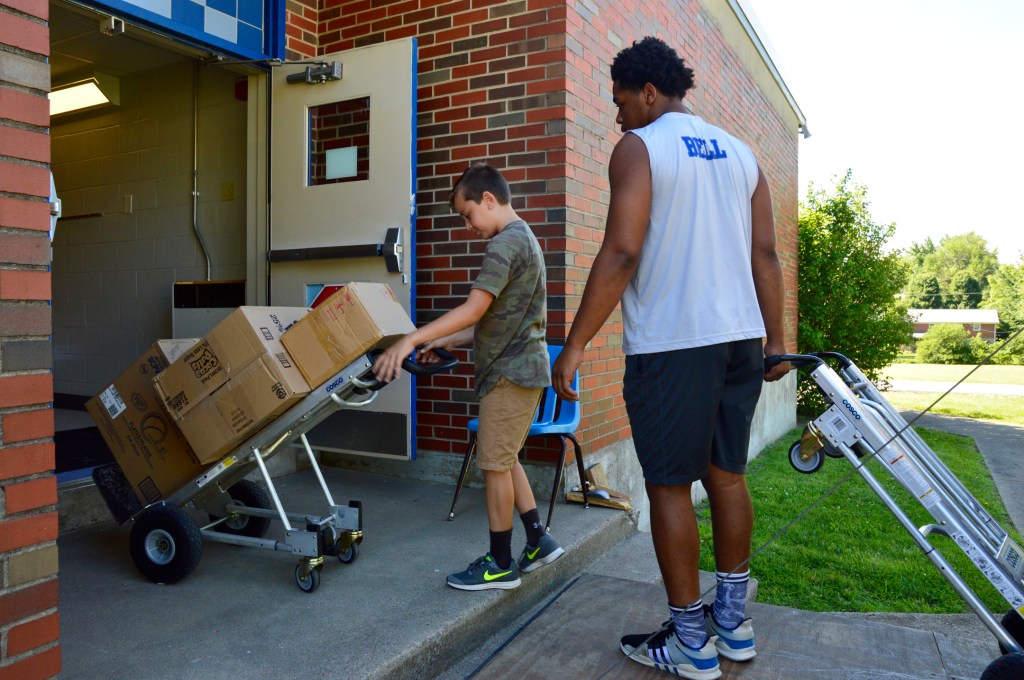 (Casey Craiger photo) Darrian Bell, right, a Danville High School football player, works with Levi, a child of one of Hogsett Elementary School’s maintenance workers. They volunteered to help transfer materials out of Hogsett and Jennie Rogers elementary schools so staff members can begin to get their new classrooms in order.

The transfer of materials is underway at what was formerly known as Hogsett Elementary School and Jennie Rogers Elementary School. The task is nothing short of a production, according to Christy Denny, district director of administrative services.

Boxes line classroom walls in Hogsett. The boxes, alongside tables and other classroom materials are plastered with stickers stating where they need to be taken.

The moving also pertains to electronics. Smart boards, computers, TVs, speakers and projectors are moving between rooms and in some cases between buildings. This requires a lot of untangling, disconnecting and reconnecting wires, some of which haven’t been touched in years.

“What I hope the end result is is that the teachers are able to get both what they want and what they need in their rooms,” Denny stated. 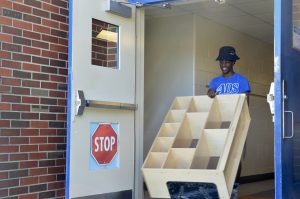 Many of the rooms at Hogsett are empty with the exception of a few boxes. This progress is attributed to the variety of unlikely staff Denny recruited.

“I called (Clay) Clevenger (Danville High School head football coach) and I said ‘Do you have any football players I can use? I think we’re going to need them.’”

Alongside cornerback Brennen McGuire and linebacker Darrian Bell is Levi, the child of one of the maintenance workers at Hogsett.

Denny created a multiple-page plan prior to the beginning of the process that states who will be where and what their assigned duties will be for each week of the transition.

“I divided up who I had into teams. There are people who paint and people who are on moving duty. We also have teams who hold down each fort so no one school is unattended” Denny said.

The delegating at the schools ensures they meet their mid-July deadline for school transition.

The teams are hard at work within Jennie Rogers. Classroom walls are being caulked and painted as needed and materials are being moved out of rooms. Currently, students’ and teachers’ chairs, bookshelves and much more lay in the gym of Jennie Rogers.

“You wouldn’t believe some of the things we have found,” Denny said. “We’ve found old coins, old Valentine’s Day cards, an old school bell, and some precious little wooden chairs.”

The chairs were found underneath the stage, an area typically explored by one of the painter’s sons, Hunter.

“There has been so much help between the schools. I’m confident that we’ll meet our deadline and if it goes as expected I have no problem with having the schools open for teachers to set their classrooms up earlier than mid-July,” Denny said.

Denny said when students return in August, things might be a bit different. The transitioning of the three schools means a new atmosphere for the students as well.

“It’s a big undertaking,” Denny said. “The combining of the schools means the kids will all grow up and learn together, rather than meeting in middle school as it was previously.”