Hotchkiss, Tiller shine for Boyle County in first round win 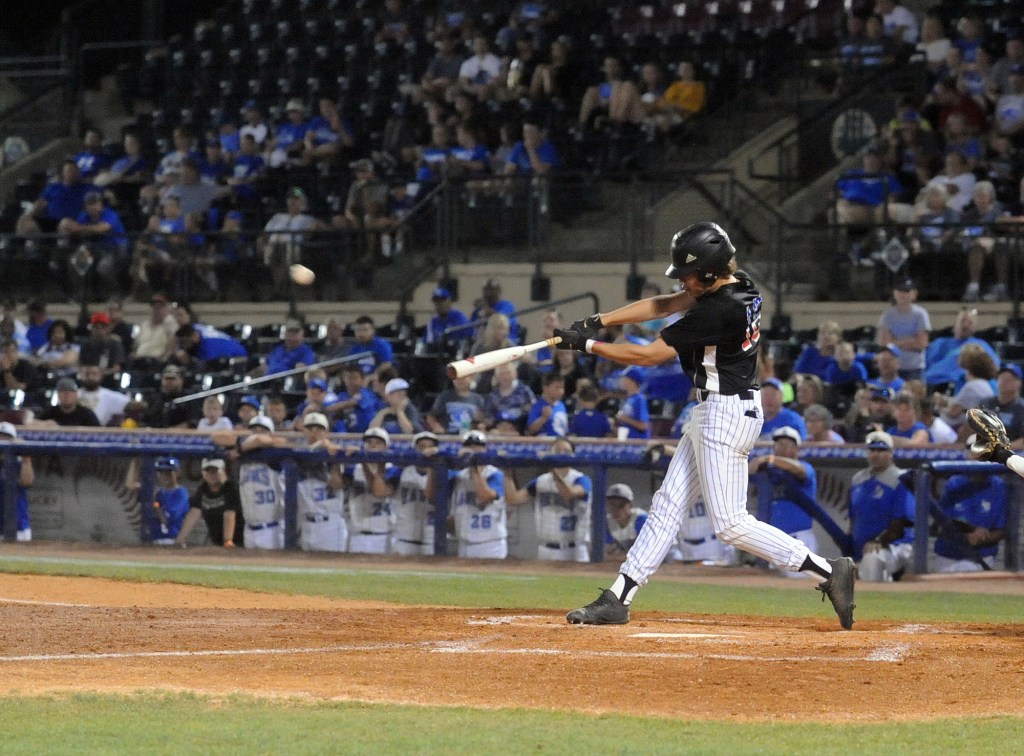 Grant Hotchkiss leads off Thursday's game with a home run.

The Rebels showed off their experience at the state tournament on Thursday, beating LaRue County 10-0 in five innings.

Senior ace Sam Tiller was nearly untouchable on the mound, pitching a full five innings. He gave up just one hit, walked four and struck out three batters.

Tiller’s day was emblematic of the entire Boyle team — the Rebels made it a point to start the state tournament with a bang, after losing to Knox Central in the first round last year.

“I think you could say the same thing about our team being here,” Boyle head coach Kyle Wynn said. “(Tiller) prepared himself all offseason for this outing right here. (Last year), it wasn’t his best but he still kept us in it. He was ready to go, on a mission this year. That’s for sure. Him cutting down their offense, which is pretty darn good, is huge. One hit on the scoreboard. Getting them off of the ropes and letting our offense work, we’re pretty good when we can swing it around and not worry about small ball.”

Grant Hotchkiss hit a leadoff home run on the very first pitch of the game to put Boyle ahead 1-0.

“It didn’t even feel like anything came off of the bat,” Hotchkiss said. “I ran halfway down the line and I was like, ‘wow, it went out.’”

That swing was the only run of the first inning for Boyle, but it showed what the goal is for this Boyle team.

“Literally the first pitch. Grant, he’s up there for a reason, to set the tone. I think he did tonight,” Wynn said. “That was huge. Last year, (we were) just getting our feet wet, just taking it all in. I think that showed that we’ve got business on our mind this year.”

Boyle blew the game open in the second inning, and it started with another senior.

Tristen Helton blasted a single past the LaRue second baseman Daniel Snodgrass to start the inning. Karson Thompson and Ethan Carter would each reach base thanks to a LaRue County error, with Helton scoring on Carter’s bunt back to the pitcher.

Cameron Yates would score Thompson on a sacrifice fly to put Boyle ahead 3-0.

Then it was Hotchkiss again, who doubled off of the wall in left-center field to score Carter from second.

“The swing has been feeling good since the playoffs started and mostly this whole season,” Hotchkiss said. “Hopefully it keeps up.”

LaRue County’s only hit of the game would come on a hard-hit ball by Noah Davis down the third base line, skipping past Hotchkiss on the bag.

Tiller allowed nothing else in the bottom of the second inning.

“He’s been a workhorse all year,” Hotchkiss said of Tiller. “He’s been unbelievable all year, that’s all I can say. What’d he have, one hit? And I probably should’ve made the play.”

Tiller’s toughest inning was the third: He issued a leadoff walk.

“Our infield has been doing it for me all season and they never really let me down,” Tiller said. “They’ve had me the whole season so I just keep feeding them ground balls and they just keep eating them up.”

Tiller finished with just 73 pitches in the win.

“I felt locked in, I was in the zone pretty much the whole night,” he said. “I was just seeing the glove pretty good tonight.”

The bright lights didn’t scare Tiller — or any of his teammates — in the first round victory.

“I really wasn’t thinking about last year before the game,” he said. “This is a whole different year, whole different season. There was a lot more preparation that went into this season after last season. I felt pretty comfortable coming out here. Us being here before really helped, I think.”

The Rebels will now face No. 1 St. Xavier in the state tournament quarterfinals. First pitch is scheduled for 1:30 p.m. on Saturday.

“It’s a big test, any time you play the No. 1 team in the state it’s going to be a big test,” Tiller said. “But we feel like our team is there and we can compete with anybody. We’re just going to go out and play ball.”

St. X defeated Pleasure Ridge Park 13-7, another top five team in the state, in the first round on Thursday before Boyle’s game.

“The two teams that played tonight, historic programs in the state of Kentucky,” Wynn said. “Obviously St. X was fortunate to come out on top. We’re aware of what we are up against and I don’t doubt our effort that you’re going to get on Saturday. We respect what they are, they’ve been No. 1 in the state pretty much all year. We’re here to make some noise, so we’ve got to play the best. We’ll play the best early, we’ve done it before. I’m pretty confident in our guys being up for the challenge.”