Question: I need some advice, Jerry. My husband and I live in an old house with very little closet space. Years ago we purchased two large, walnut armoires for clothes storage. We have finally had a closet built in one of the bedrooms and now we have one too many armoires.

They are almost identical on the exterior, although we bought them years apart in different states. One is divided down themiddle, with shelves on one half and a hanging rod on the other half.

The other has just the rod. Both have a shelf above and two small drawers located near the floor.

Is one more likely to sell than the other? Is there still a market for these, and how would we go about selling one?

Answer: I love wardrobes and armoires. Since I was a child, I’ve always thought that there was something very “Chronicles of Narnia” about them. Of course, they served a much needed purpose — storage!

If you’ve ever lived in an old house you know the agony. So yes, wardrobes and armoires were very helpful and serviceable. Then more modern houses were built in the early 1900s and1920s.

By this time, middle American families were acquiring more clothing and “stuff” and built-in closets were deemed necessary. This was when the old wardrobes were unwanted and they stayed that way for a long time.

Prices were low for these relics. Then suddenly the late 1980s and early 1990s happened! Old wardrobes were found to be amazing pieces, that when retro-fitted were ideal for TVs and stereo equipment. Amazing!

Then guess what happened? TVs got thin and elegant. Bulky stereo equipment became Bose products or smart phones. To top it off, closets aren’t even thought of as “closets” unless they are room-sized, with roll out racks and glass fronted bins. Yet again, wardrobes and armoires weren’t needed and prices have tumbled.

If you read this column you know what “brown” wood furniture is doing in today’s market.

What was your question? Oh yes, divided vs. not divided. I don’t think that it’s an issue, as it’s a large piece of furniture and it’s brown. Personally, I would like the shelves.

There is still a market out there, but it’s slim from what it was, even 20 years ago. Selling? I would try to focus on others who have large old houses and don’t have the cache of built-in closets. You might try sites like Facebook or Craig’s List. I hate to say it, reach out to some wood workers. The wood is beautiful and could be utilized for other projects.

I would avoid eBay unless you list it as local pick up ONLY. Professional shipping, even local, would be too high. You might try a well publicized local auction house. But I can tell you, it won’t sell for more than $100 – $200 on a good day or night.

Also, you might keep it if you have the room. If you’re interested in spending some more money, when retro-fitted they make gorgeous bars. But I guess you didn’t want to hear that.

Thanks for a great question and I hope this helps some. 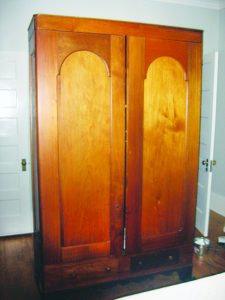