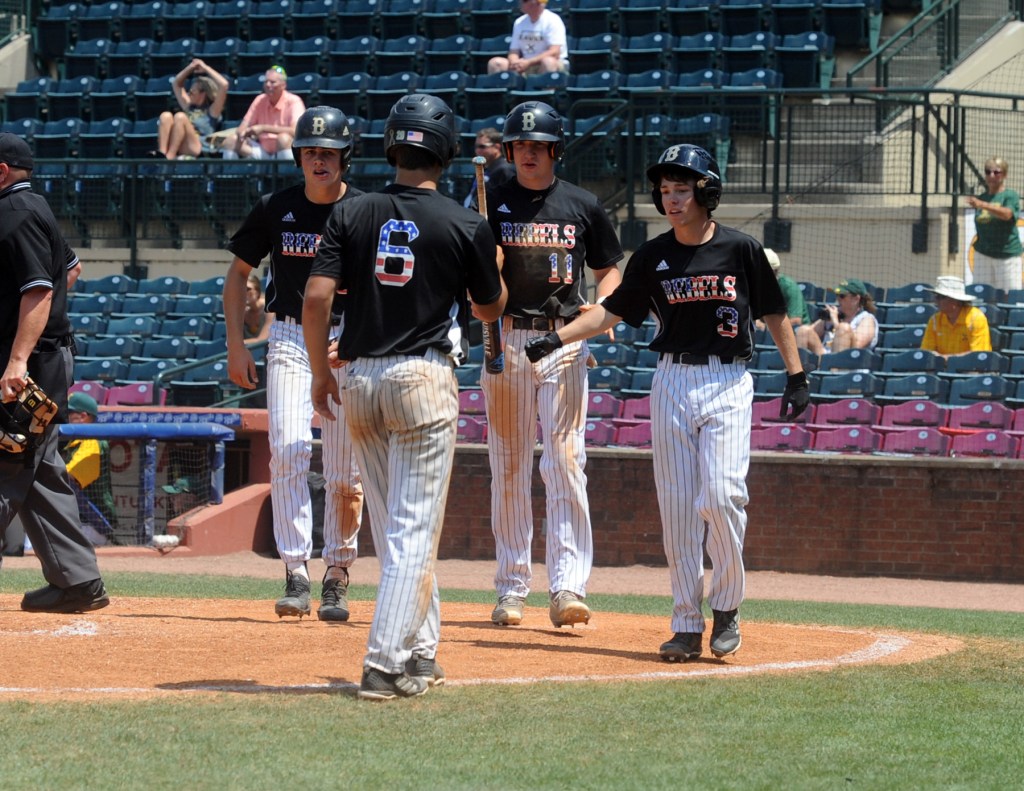 LEXINGTON — Boyle County shut out the No. 1 team in the state for five innings.

Two big innings for St. Xavier were the difference in Saturday’s state quarterfinal, as the Tigers defeated Boyle 9-5 to end the Rebels’ season at 27-7.

“St. X is a good team, they beat us today,” Boyle head coach Kyle Wynn said. “I loved our effort, we didn’t quit, that’s how we’ve been all year. The heart and soul of the team has been our ability to not give up, to keep going until that last out.”

The Rebels took an early 2-0 lead in the second inning before starter Karson Thompson ran into trouble in the third inning. St. Xavier scored five runs to take the lead and wouldn’t give that lead away the rest of the game.

But Boyle rallied: The Rebels scored a run in the top of the fifth to cut the lead to two runs.

“We’ve talked about that all year, if you can limit the big innings to three or less, you give them less and you’ve got a shot,” Wynn said. “We can do some more things when it’s close. But you look at the scoreboard, we gave them two big innings. If we limit those it might be a different story. It’s tough to limit the No. 1 team in the state, too.”

St. Xavier would respond with four runs in the bottom of the fifth inning to take a 9-3 lead.

Boyle plated two runs in the top of the seventh inning and had two runners on base when the final out was recorded, ending the game at 9-5.

“We didn’t have enough today to bring it all the way back but just seeing that fight at the end, I’m proud of them,” Wynn said. “Some things that we learned earlier in the year got us to this point, no question. We were there till the end, unfortunately we had too much to overcome.”

Senior Alex Sergent said his team showed that it could play on the biggest stage against the best teams in the state.

“I don’t think anyone really expected us to be here, but we expected it the whole year,” he said. “We lost six games by a total of nine runs all year. We could’ve very well went undefeated, people overlooked us the whole year, I feel like. Especially after the district championship.

“You look up on the scoreboard, (St. Xavier) had two big innings. They put up zeroes for five innings. We played right with them the whole game, I feel like. We just gave them two innings. That’s a testament to the guys I’m around, the guys I play with. I wouldn’t be who I am without those guys I grew up with.”

Senior Hunter Mason had the hit to get the first runs on the board. He blasted the ball to first base and advanced to second on an error by St. Xavier first baseman Bryce Elmore. Gabe Graham — pinch running for Boyle pitcher Karson Thompson — and Cameron Yates each scored.

Thompson cruised through the first two innings but his day ended in the third, when St. Xavier scored four runs with one out. Thompson would get two outs in the inning before fellow sophomore Grant Hotchkiss took over.

Hotchkiss had a similar line: He kept the Tigers off of the board in the fourth inning and had two down in the fifth, but couldn’t get the final out. St. Xavier scored four runs in the fifth.

Hotchkiss would be named to the All-State tournament team after a 5-for-6 performance in two state tournament games, with a home run, three runs scored and two runs batted in.

“It’s good, I’d rather have the team one,” Hotchkiss said of his award. “We gave up those two big innings, I still feel like we’re the best team in the state even though we lost. Ball just didn’t really bounce our way today, St. X is a good team.”

Ryan Nicholson went five innings on the mound for St. Xavier, giving up three runs (one earned) while striking out four.

Boyle made noise in the final inning when senior Tevin Leigh reached base on an error, scoring Jack Briese — pinch running for Mason — and Alex Sergent to make the score 9-5.

Boyle would send the potential eighth run to the plate but a strikeout ended the game.

“What they did is they left it out there. What else are you going to say?” Wynn said “The seniors set the tone and the sophomores on down, I’m proud of them. We did some things that hadn’t been done in school history before, nobody’s won back to back regions before, nobody’s made it to the Elite 8 before.”

“We had 10 seniors, I hate this for them,” Wynn said. “They’re going to leave as one of the better classes in school history. At times, we were starting six sophomores. That’s good to talk about the future, we talked to the guys and the underclassmen, seeing these seniors and how much this hurts. Now it’s up to them to get us back here for a third straight year and maybe take us one more step.”

Sergent said the work his senior class put in — 91 wins across the last four years, including two region titles — speaks for itself.

“The brothers I play with, I think what we did speaks for itself: Back to back region titles, two years in a row. The first year we didn’t know what to expect up here, but this year, we left it on the line. We’re sad that we’re leaving each other, but we’re not sad about how we played.”