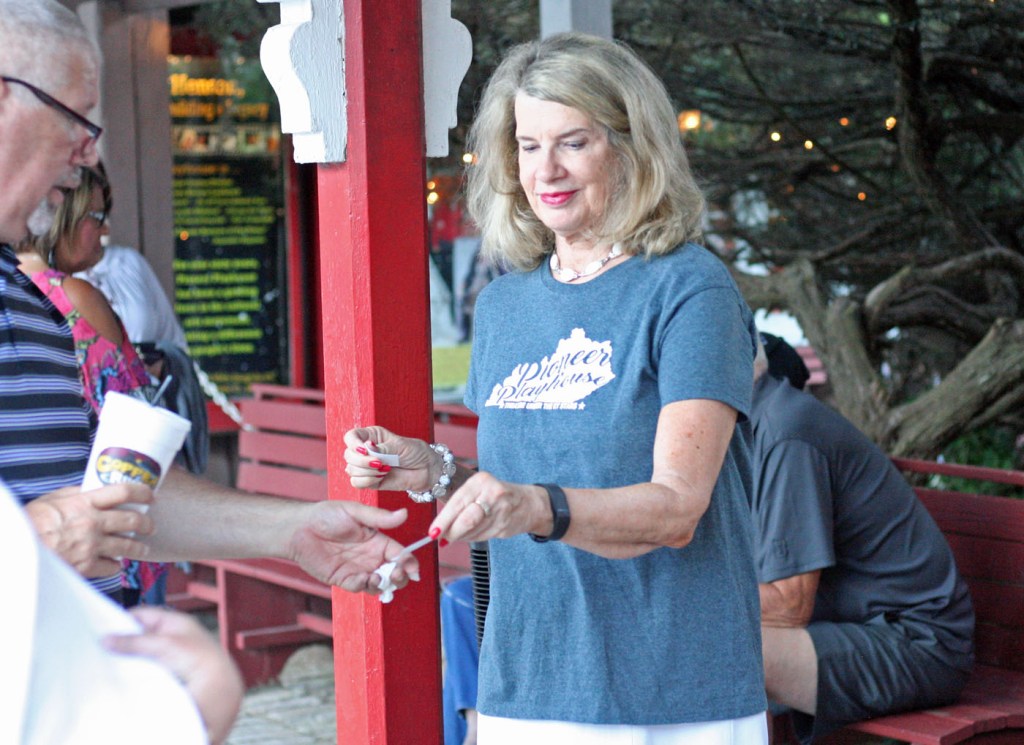 (Kendra Peek photo) Linda Gover, a volunteer at the Pioneer Playhouse, hands a ticket back to a patron.

By 7 p.m., Gover is in her place, situated on the platform of the train station that marks the entrance to the playhouse, ready to take tickets. 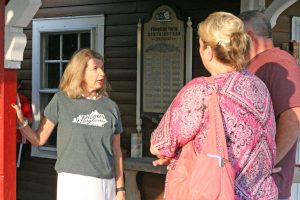 “Basically, this is my post here,” she said with a smile.

She calls it a relaxing place to volunteer, even though some nights get busy, like Friday night was.

She said she usually arrives between 6:30 p.m. and 7 p.m. and spends the minutes leading up to 7:30 p.m. meal offering working with those who have dinner reservations.

People slowly meander in, with a lot of patrons arriving as it gets close to the play’s start time of 8:30 p.m.

Gover shows a first-time couple around, giving them a small tour and history about the playhouse as she leads them to the dinner line.

“I share what little I know,” she said, shrugging, between patrons.

She returns to her post long enough to grab a schedule for the newcomers, to inform them about the upcoming performances for the season.

A few returning patrons arrive, talking with Gover before walking down the buildings to get ice cream.

Another new couple arrives; Gover shares some history and shows them where their seats will be, takes their tickets and more. 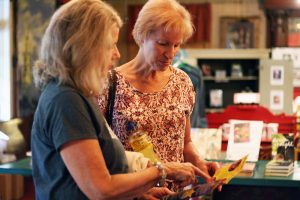 (Kendra Peek photo)
Linda Gover shows first-time visitor Valerie Stevens a flier with the schedule for the summer. Stevens was visiting with her husband Mark from Richmond.

Gover said she became a volunteer after she retired.

“I had heard about it through a friend and I had been to plays here. I really enjoyed the atmosphere and since I retired I was wanting some extra-curricular activities,” she said. “It’s a nice, peaceful atmosphere.”

She serves at other places in the community, such as helping with the nursery at Celebrate Recovery at her church, Indian Hills Christian Church; serving at Grace Cafe and and volunteering with Charleston Healthcare.

“When you retire, there’s no reason to be bored, there’s too many places in Danville to help,” Gover said.

Sometimes, Gover hangs around after the play starts and watches the show. If not, she heads out at about 8:45 p.m.

This is her fourth summer serving as a volunteer at Pioneer Playhouse. She said when she considered whether or not to volunteer again, she consulted her grandkids.

“I said to my grandkids, ‘Should I volunteer again this year?’ and they were like, ‘Oh yeah.’ They just like it, the place,” Gover said. “It’s just an adventure for kids, grown ups and everybody.”

ATVs disrupting life on the Fork