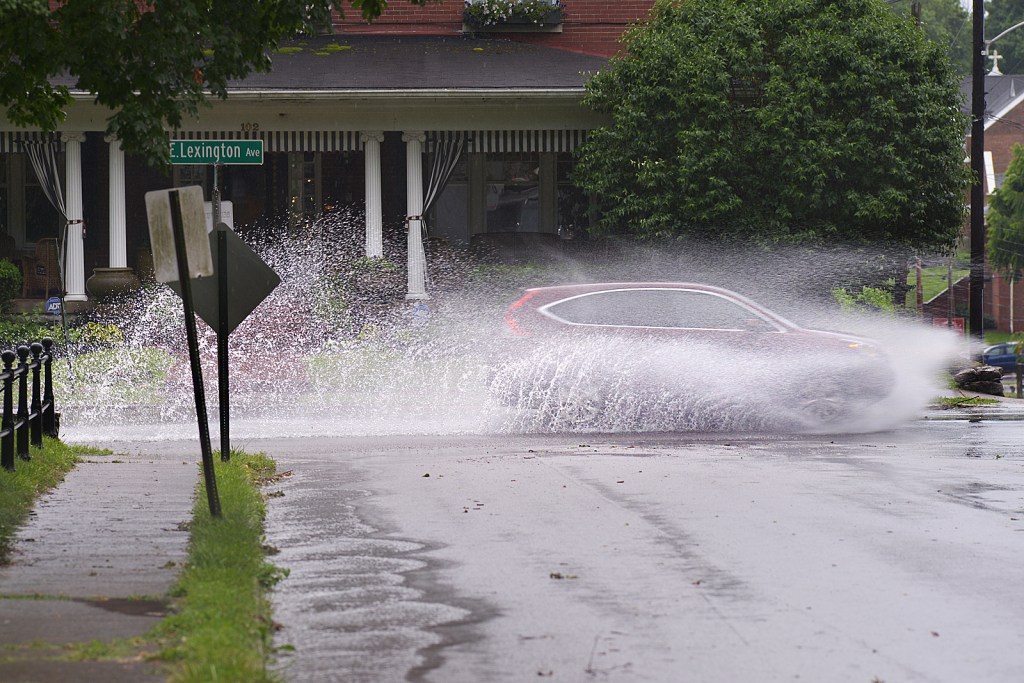 Photo by James Morris A vehicle plows through standing water at the intersection of North First Street and Lexington Avenue during heavy rain Monday afternoon. Rainy weather is expected to continue for much of the week.

A storm that blew through Boyle County Sunday evening brought wind and rain, as well as calls about outages and downed lines. Northpoint Training Center was among the places that suffered a power outage.

“We had some wind, typical limbs down … There was a power line on Wells Landing Road and several temporary outages with Inter-County and KU both,” said Boyle County Emergency Management Director Mike Wilder. “Not a large amount and they were very short intervals.”

It was at about 5:12 p.m. when a tree was knocked down, pulling electric lines out of a house on Wells Landing Road, according to the Danville 911 Center blotter. The same thing happened about an hour later on Harding Street.

There was also a power outage at the Northpoint Training Center at 9:39 p.m., according to the Danville Police blotter.

Mendalyn Cochran, deputy warden, confirmed Northpoint had a power outage yesterday. She said the prison is placed on a lockdown in situations like that.

There was no real flooding in the area, but there were some places where water was standing on the roadways.

“The forecast is not conducive to a lot of drying out,” Wilder said. “There’s a chance of rain the biggest part of the week.”

Temperatures are expected to remain between 83 degrees and 88 degrees most of the week, with lows of 68 and 69 degrees at night.