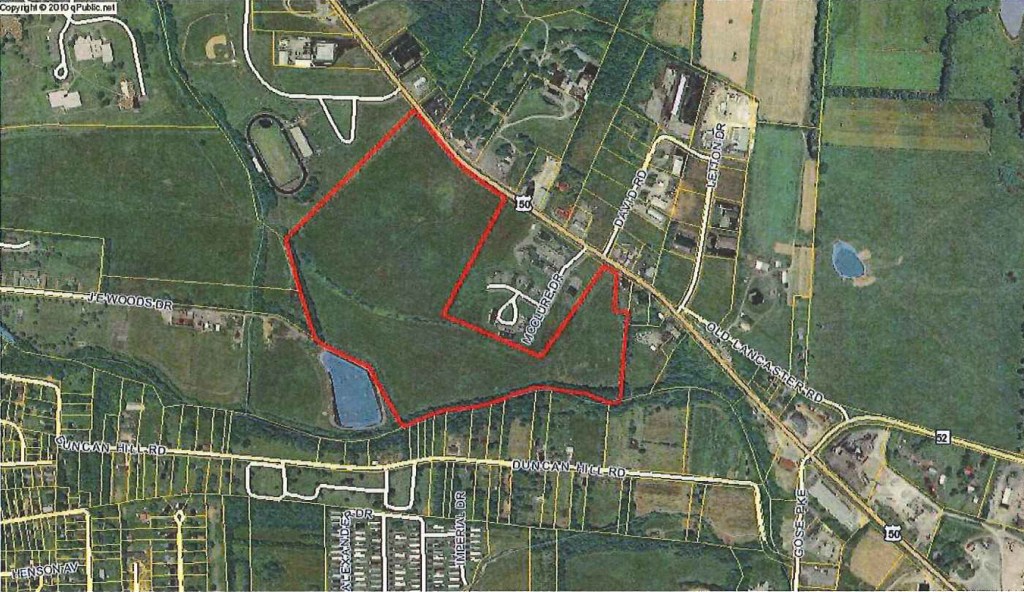 Danville-Boyle County Planning and Zoning A map shows in red where a 55-acre property is located off of Stanford Road in Danville. The back side of the property approaches J.E. Woods Drive, making it hypothetically possible that a road on the property could be a direct connection from Stanford Road to South Second Street. That's one possibility on the table for owner Michael McAfee, who hopes a variety of commercial and residential buildings can be developed on the land.

Just two months after making it possible to amend its future land use map, the Danville-Boyle County Planning and Zoning Commission has approved an amendment for 55 acres off of Stanford Road.

The amendment makes possible a wide range of development options for the property, which is owned by Danville businessman Michael McAfee, of McAfee Mowing and Landscaping.

McAfee said plans are still being developed, but he sees “a lot of potential” for the Stanford Road area north of Gose Pike.

“I’d love to have some more restaurants on that side of town,” McAfee said.

In addition to there being school facilities in the area that restaurants could cater to, McAfee said it’s possible that office space could be attractive to people working with the hospital downtown — if a road were constructed that connects Stanford Road to J.E. Woods Drive, which would complete a route through to South Second Street.

Such a project is purely hypothetical at this point and would require working with the City of Danville to see if it’s possible, but it could improve traffic flow to downtown, he said.

In addition to commercial spaces, McAfee said there’s the potential for a development to include residential buildings “in the back.”

“Everything is kind of on the other side of town, obviously,” he said. “I’d like to have something that helps out the downtown, since that is kind of a downtown area … Right now, we’re just kind of waiting to see what we can do and get Planning and Zoning involved.”

The P&Z Commission voted unanimously to approve amending the FLUM as requested by McAfee at its June meeting last week. P&Z Director Steve Hunter explained the FLUM designates what kind of use is expected to happen in the future; it doesn’t affect current zoning or land-use.

“While the zoning map and its associated zoning districts defines specific uses and development types currently permitted for individual properties, the future land use map (FLUM) depicts more broadly the likely pattern of land uses that may exist in the future,” according to the P&Z staff report. 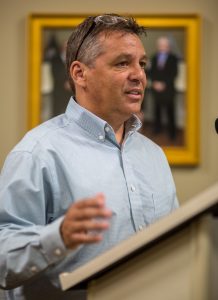 Hunter said P&Z had to amend the FLUM to allow for mixed-use development on the land before McAfee could request specific zone changes for whatever development may occur.

The category change “better defines this area for a mix of commercial projects and multi-family development and is the desired plan,” according to a comment from McAfee’s application.

McAfee said as plans for the land are refined, he may return to P&Z with further zoning requests as soon as July or August.

In other business, the P&Z Commission approved an overhaul of its subdivision regulations.

“It’s not stuff that gets people’s attention, but in my opinion, it could be the most important document we have,” Hunter said at last week’s P&Z meeting.

Hunter said many of the biggest changes occur in Chapter 3, “Procedures and Requirements,” which deals with how development and construction is allowed to happen.

One big change is additional oversight for P&Z when a developer is building roads that will eventually be accepted into the county road system. Hunter said under the old subregs, P&Z essentially had to rely on the word of the developer that the grading and other attributes of the road had been done to code. That left the door open for “bad developers” to cut corners, which increases the risk of road failure after the road is accepted by the county.

“The danger in what we do today is … a good developer, they do it right. But a bad developer could go out and grade that any way they want. We don’t know (if they) are using the right rock, not the right rock — are they following the standards?” Hunter said. “… We don’t know these things because no one is out there checking on them, and the construction plans are on file, but there’s no inspection and oversight.”

Hunter said right now, P&Z may not be set up well to handle a lot of oversight, but the new subregs make it possible for P&Z to grow and improve in that area.

“Ultimately, the goal is to protect the taxpayer and the government that they’ve got a good asset.”

The new subregs also place a three-year time frame on developers, or else P&Z can take action to force completion of public infrastructure projects, Hunter said.

“If you’re going to build a government street, you’ve got three years to get it done. After that, you’re in default,” Hunter said. “What that means is we’re not reducing any more of the bond, we can move against the developer to finish it.”

Hunter said a timeframe is necessary because if a road sits unfinished for a long time, its long-term durability can be harmed.

“When you see streets that don’t last 20 or 30 or 40 years, the problem isn’t typically the (government) service. It’s a problem when you leave the base open for 11 or 12 or 15 years,” he said. “… But the bigger problem is no oversight in grading — the rock, the sub-grade, the construction techniques are critical to getting a good asset at the tail end.

“Now, developers will scream and cry and say, ‘That’s not fair, the way you’re bonding, and what I have to spend to build the city a street.’ But in every situation, the city or the county’s cost to maintain that street forever far outweighs what the developer put down in money to build that government street.”

After questions from the P&Z Commission, Hunter clarified that while P&Z will have the authority to inspect and monitor construction of new streets, it will be up to the agency to show up and do its work on the developer’s timeline — no developer will be required to hold back on planned work until P&Z can make it out for an inspection.