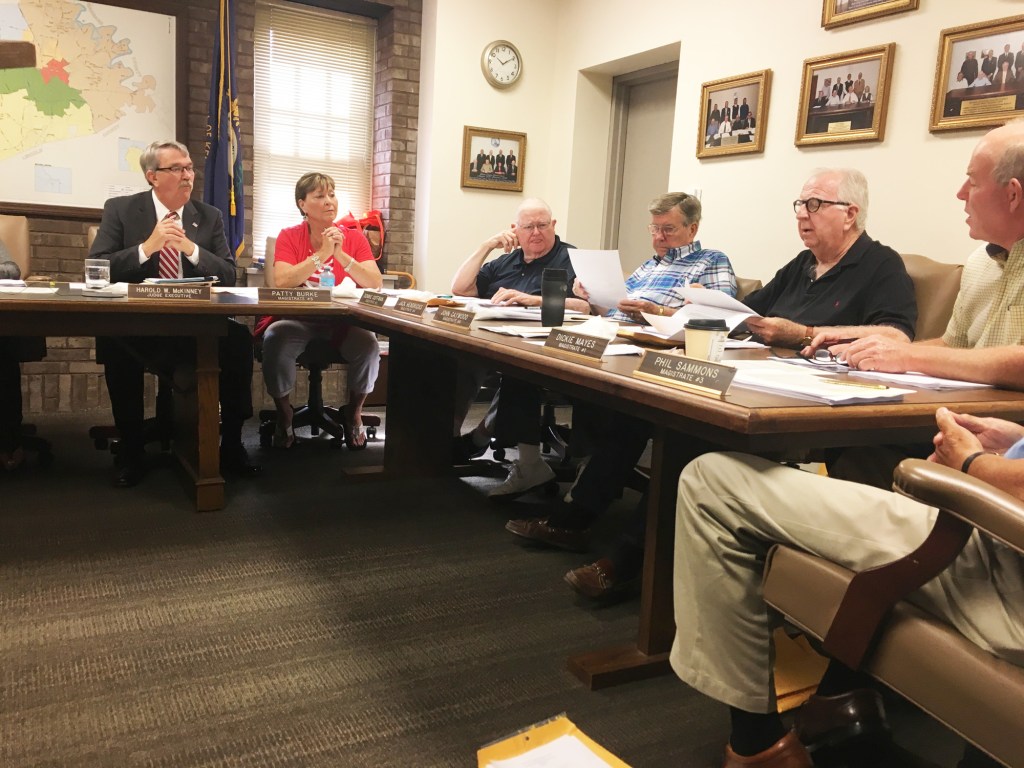 A lively Parks and Recreation funding discussion continued on Tuesday morning during Boyle County Fiscal Court’s meeting, and comments ranged from citing “irritation” and predicting “severe problems” to a call for an agreement of more communication with the city.

The meeting also resulted in Boyle County approving a funding plan officials say will keep the Bunny Davis center pool open at least through the summer of 2019.

Magistrate Jack Hendricks opened the conversation by explaining he and Magistrate Patty Burke have “discussed this extensively,” referring to what has happened since it was made public the county was planning to provide less funding than requested for the Bunny Davis center next fiscal year.

The court previously voted to provide $26,400 less than requested for the operation of the center and its pool.

In past years, the county and city have shared the cost of running the center at a 55/45 ratio — the county paying 55 percent of the operating costs and the city paying 45 percent. Some on the fiscal court said capital improvements at Bunny Davis were never meant to be a part of that original split agreement.

Tuesday, Hendricks recommended taking $8,500 of the $208,500 the county has allocated for the main Parks & Rec budget and putting it in a reserved account for the pool. He said he’d spoken with Parks & Rec Director John Drake and was told the amount could keep the pool open through summer of 2019.

Hendricks said this plan comes with a caveat, though: “… we wait and see what will happen with the budget that the city has come up with.”

The city’s proposed budget for the coming fiscal year ends direct distribution of funding from Danville to Parks & Rec, and instead puts the city’s $240,000 allocation for Parks & Rec into a restricted account that City Manager Ron Scott would have control over.

Hendricks said he thinks the city’s plan is “a major, major error in judgement.”

He thinks the county should “make sure all the money goes to the parks just like we’ve done in the past and let the committees and the park management have the ability to pay the bills on time rather than having to have some kind of monthly meeting with the city manager and say he’s got to approve every bill. Nobody can run a half-a-million-dollar budget that way.”

Before discussion continued, Hendricks motioned designate the $8,500 for the pool, and Magistrate Burke seconded. The motion was passed unanimously.

Burke asked if she could read a prepared statement, and said she was citing a May 16 article in The Advocate-Messenger, “that Boyle Fiscal Court wanted to close the gym and pool. But the truth of the matter is we just wanted to fund 55 percent of the operational costs, not the maintenance of the buildings, etc. since we do not own the property.”

The article Burke was referencing had the headline, “Boyle aims to close Bunny Davis gym.”

That story quoted Judge-Executive Harold McKinney as saying cuts to funding for Bunny Davis and a subsequent increase in funding for the main Parks & Rec budget could “send a clear message that we want to put our resources in Millennium Park and not in the Bunny Davis center and pool;” and it noted multiple magistrates agreed with McKinney’s assessment.

The story quoted Hendricks and Magistrate Phil Sammons making critical comments about the gym space on the lower level of the Bunny Davis center. “… I think that bottom floor just needs to be shut down and save us our money,” Hendricks was quoted as saying.

The story also explained that McKinney and Boyle County Treasurer and Deputy Judge-Executive Mary Conley came up with the proposed cuts to funding for the pool.

“Conley said those cuts were designed to eliminate any cost to Boyle County for maintenance and upkeep of the Bunny Davis facility,” the story reads. “… Instead, the county only wants to pay 55 percent of the day-to-day operational costs to keep the pool open.”

“We need to be with the city not only on this, but down the road,” Magistrate Sammons said Tuesday. “I don’t think we need to have our communities upset and wonder whether we’ll have a pool next year … it’s very important that we do keep it open.”

“I agree with you,” McKinney said. “They say ‘a fool never changes his mind, but a wise man does.’ And we’ve changed our minds just a little bit.”

“Well, I don’t think we really — I think we were misrepresented or misquoted, more or less,” Sammons said, then added — “Or maybe we said that. But I don’t think any of us on this court intended to have the pool closed.”

During the prior budget workshop when the fiscal court voted to reduce funding for Bunny Davis, Sammons said of the center, “The city owns this; we’re not getting anything out of it. I don’t understand why we have to be involved in it. Why are we paying anything on this is what I want to know. I don’t like any of it.”

Tuesday, Magistrate John Caywood suggested anyone who questions whether or not the pool is used should visit it.

“If you do, get out of your car and go up there, see the kids playing,” he said. “We need to talk about it, no doubt, but it’s definitely used and enjoyed …”

Caywood also said the Parks & Rec ad hoc committee is “larger and greater than what I realized, and we all need to be on the same page. In short, it’s for all of the parks, not just Millennium.”

The court was reviewing a resolution about the ad hoc committee, a joint committee of city, county and Parks & Rec officials that has overseen additional capital project funding for parks the past few years.

Members of the fiscal court agreed it should be clarified as to what parks are considered under the scope of the committee that are outside of Danville city limits — there are several others, aside from just Millennium, Hendricks pointed out.

Later in the meeting, Mayor Perros spoke to the court and shared a few analogies about what all has changed in the past 20 years — referring to the parks maintenance argument being spawned that long ago — and then shared a Socrates quote about focusing energies not on fighting the old but on building the new.

“There’s also another quote, ‘Intelligent individuals learn from everyone, average individuals from experience, and the stupid people already have the answers.” The room was quiet when Perros looked up. “I thought that was cute, obviously you didn’t find it as funny as I did …”

Perros said the release of a master parks plan, which Danville paid consulting firm Brandstetter Carroll to develop, would create an opportunity for the city and county to come together open lines of communication. The plan is expected to be released this year.

“Let’s get together, and come at this from a clean-slate point of view. Let’s forget the things that have been said,” Perros said. “Let’s move things forward.”

McKinney said the city and county could “start all over; go forward as friends.”

oing to do with the funding?” Hendricks asked Mayor Perros.

“I think two representatives with the ad hoc (committee), from the city and county, need to go have lunch somewhere. Discuss it. Figure it out. And let’s have our conversations with each other, and not in a group so the press has it and puts it out. Because what you read and what is actually said can be interpreted a couple of three different ways.”

City Manager Scott was asked Tuesday afternoon about some of the comments made during the fiscal court meeting.

“The intent on this was not to micromanage,” Scott said in reference to the complaints about him overseeing the Parks & Rec funds. He said the city had agreed with Roger Ross — chair of the Parks & Rec Board — and the staff to meet monthly to talk about upcoming bills and the department’s financial condition. “Then we’d issue the check for that month.”

Scott said first of all, Parks & Rec is the largest single appropriation for the city — around a quarter of a million dollars. “Much more when you consider things we’ve done and not even mentioned.”

Scott said the city has just finished a $480,000 lighting project at Millennium, and has made other large investments in the park.

Scott said the idea that the county is backing away from funding Bunny Davis came from the fact the court voted to fund Bunny Davis by $26,400 less than requested.

Scott said, “I don’t have the unilateral authority to differ from the policies established by the city.” He said he had no intent to differ from what the allocations approved by the city commission are, but he has the responsibility to administer those funds.

“What the commission has done is accept my recommendation that we have a closer look at the Parks & Rec budget — it’s a matter of policy that we want to look more closely, and that’s part of the recommendation.”