In September of last year, Marvin Harberson of Perryville came to A Gathering Place Senior Activity Center, then known as Danville- Boyle County Senior Citizens Center, with an idea. After watching the devastation Hurricane Harvey unleashed on his fellow senior citizens in Texas, he was moved to action. 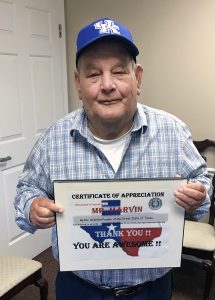 Marvin Harberson shows off the award he received after helping to collect more than 12,000 bottles of water to send to Texas following Hurricane Harvey last year.

Noting that one of the most problematic issues was the lack of clean drinking water, Harberson began encouraging his fellow seniors to contribute to a bottled water drive. One case of water soon became two, which quickly turned into a pick-up truck bed full. Before long, there were palettes full of clean bottled water, over 12,000 bottles in all, ready to be loaded on a semi truck bound for Texas.

In recognition of his efforts in leading his fellow seniors to respond to those in need, Harberson recently received a Certificate of Appreciation from, “The Grateful People of the Great State of Texas for helping to provide clean drinking water to so many during Hurricane Harvey.”

“It is this spirit of caring and compassion displayed by our members that is contagious in the community,” says Ben Guerrant, executive director of A Gathering Place.  “Marvin saw a need and brought it to the attention of our group, and the way they responded was amazing. I can’t say enough about how proud I am of all them. Kudos to all of them for their work, and especially to Marvin for his leadership in the project.”