‘Return of Tinker Doyle’ takes local to a new level 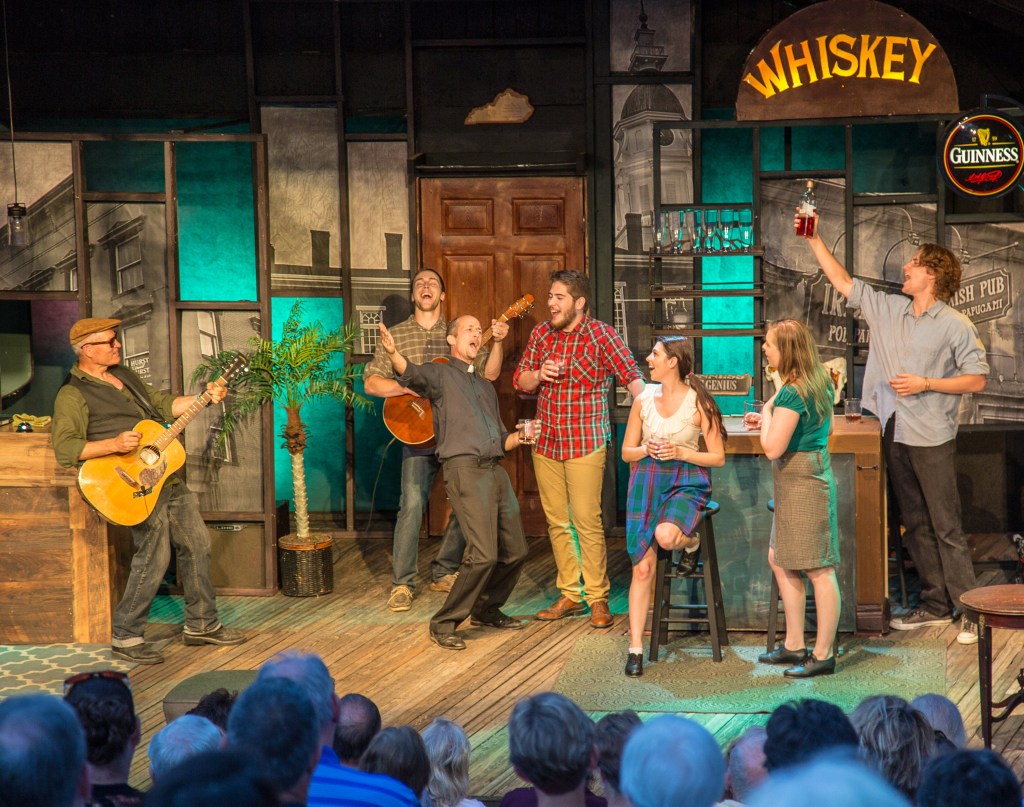 A packed house watches the premiere of "The Return of Tinker Doyle" at Pioneer Playhouse Friday night. (Photo by Ben Kleppinger)

“Kentucky Voices” plays at Pioneer Playhouse are always a special treat for locals, because they’re not set in Hollywood or New York; they’re set in central Kentucky and they feature people, places and stories you know from real life.

“The Return of Tinker Doyle” dials the “Kentucky Voice” to 11 — more so than any other play I’ve seen at the outdoor theater. As a result, it’s one of my favorite shows.

There’s hardly a scene that goes by in Pioneer Playhouse’s first offering of its 69th season where there isn’t a local reference or two — or five. But the local-ness of this play goes beyond name-dropping the Beer Engine, Plank on Main, the Sister Cities Commission or a bunch of other local entities.

The bulk of the play is set inside a new “boutique” hotel in downtown Danville — a project that’s been on the radar of the Convention and Visitors Bureau and in the news on the pages of this paper for some time, but has yet to materialize in the real world.

One plot catalyst in “Tinker Doyle” is news that the City of Danville plans to cut funding for the Sister Cities Commission, the body that manages Danville’s cultural exchange program with its Sister City, Carrickfergus, Ireland.

I don’t know if Danville officials who attended Friday’s premiere were  squirming in their seats at that plot line, but I do know pretty much everyone was laughing throughout the performance.

“The Return of Tinker Doyle” is a sequel to playwright Elizabeth Orndorff’s “The Search for Tinker Doyle,” which was performed at Pioneer Playhouse in 2013. But you don’t need to have seen or remember anything from the first play to enjoy the second one. All the relevant backstory is neatly summarized at various moments throughout the play, so you won’t be left in the dark.

In addition to the intentional local flavor added to “Tinker Doyle,” there’s a bit of unintentional comedy as well. The play was supposed to star Irish actor and musician Kieran Cunningham, who has visited Danville before from Carrickfergus. He was the star in the first Tinker Doyle play.

But the visa program Cunningham had used to visit Danville and participate in cultural activities before didn’t work to let him come to the U.S. this time, so the Pioneer Playhouse staff had to scramble to find a replacement.

The play’s script actually involves issues with visas for people traveling between Ireland and Kentucky, making the fact there really were visa issues ironic and serendipitously providing some additional inside jokes for the audience to enjoy.

In the search to replace Cunningham, the Playhouse couldn’t have found a better one — former Playhouse favorite Daniel Hall Kuhn has returned to the stage to play Tinker Doyle.

It’s been four years since Kuhn acted at Pioneer Playhouse, which is about four years too long. Kuhn’s effortless performance as a rascally but devout Irish priest elevates the whole performance to another level.

Kuhn acts alongside perhaps the most well-known Playhouse veterans, Eben French Mastin and Patricia Hammond, who portray the mayor of Danville (a fictional one, not a specific one) and his wife, respectively. Mastin and Hammond almost always get cast as a couple and it’s no different in “Tinker Doyle.” Their chemistry together is as sharp as ever.

Dalton Graves plays Sean, the comical manager of the boutique hotel, and also has a stand-out performance. Graves times many entrances and lines perfectly to catch the audience off-guard and get them laughing hard.

“The Return of Tinker Doyle” is a uniquely funny play that every Danville resident should go see. The play is custom-made for local residents; I couldn’t keep count of the number of jokes that had deeper levels and hidden meanings if you’re from here.

If you haven’t seen a play that uses a local angle to its advantage like “Tinker Doyle” does, you’re missing out on a whole different level of theatrical experience. Your chance to have that experience lasts through June 23.

“The Return of Tinker Doyle” runs through June 23 at Pioneer Playhouse. Shows are 8:30 p.m. Tuesdays-Thursdays, and an optional pre-show dinner is available at 7:30 p.m. with reservations.