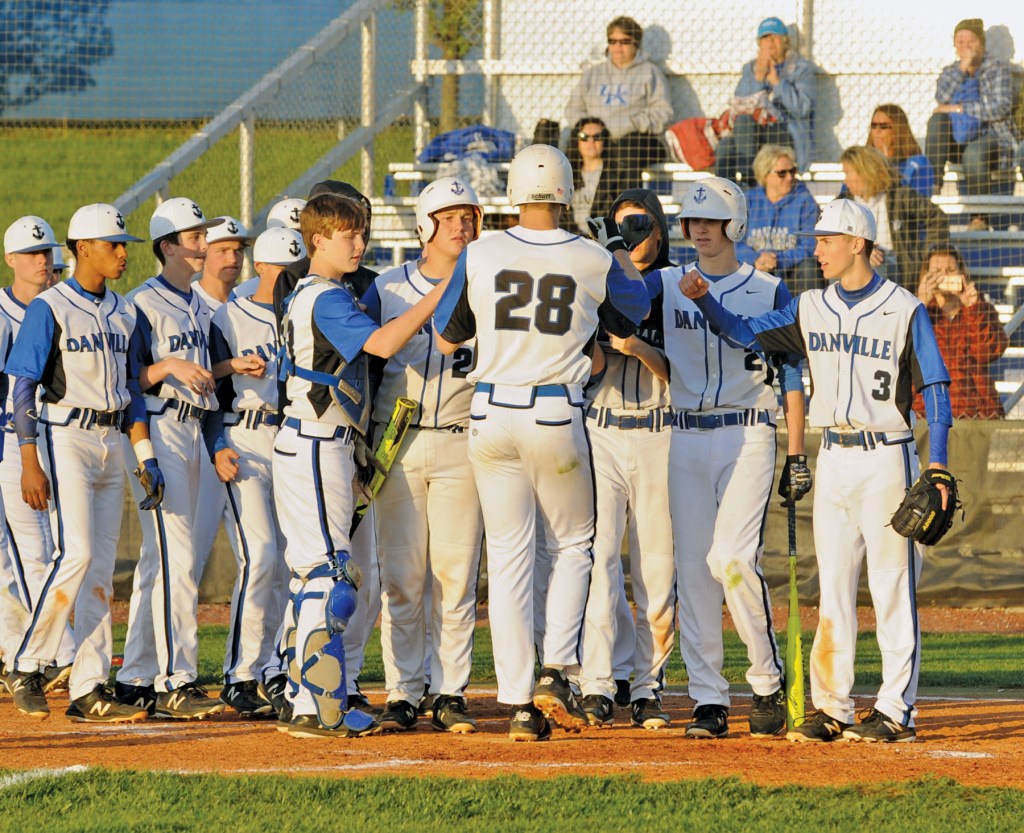 There’s no doubt about it: The youth movement is alive and well for Danville baseball.

This season, the Admirals won 28 games — the most in the 12th Region — and the most for a Danville baseball team since the 2012 region runner-up Admirals won 31 games.

The number of wins is impressive, but it’s even more impressive when you consider the number of underclassmen that the Admirals started.

Danville will return seven of its nine starters next year from that 28-win team. For the majority of this season, the Admirals started four freshmen and one eighth grader — and that number may have been five freshman and an eighth grader had Christian Howe not been hit with an injury in April that forced him to miss the rest of the season.

It’s safe to say that Danville fans have a lot to look forward to.

“They’re very coachable. They want to be good and they want to learn. They want to know what they have to do to make the next step,” said Danville head coach Paul Morse. “And it’s not just one or two of them. There’s a whole core group of those guys in those young classes.”

Adding freshmen Kadin McWilliam and Britton Minks and almost 70 percent of this year’s 28 win roster were either freshmen or eighth graders.

And it’s hard to ignore their impact.

Offensively, Danville was paced all year long by Ethan Wood. The freshman led Danville in almost every major category: hits, home runs, RBI and slugging. He also ended the season second in the state with his 12 home runs and 57 RBI, and was 14th in the state with an .872 slugging percentage.

He didn’t just do it at the plate but on the mound as well, where he posted an 8-5 record and a 1.98 ERA  in 67.1 innings pitched. He added 103 strikeouts, putting him eighth in the state and three behind his junior teammate Cayden Shaver.

Once again, the numbers are impressive. But even more impressive when you take into account he’s just a freshman.

“The potential is there,” coach Morse said. “There haven’t been numbers put up like that here by a freshman in a long time. The sky’s the limit for him and now he needs to keep on working because he’s not going to sneak up on anyone next year.”

Wood, who’s already verbally committed to the University of Louisville, said he wasn’t necessarily trying to set records but, instead, do his part to help his team win.

“Every game I just tried to do my job for whoever was pitching and for my team,” he said. “You can’t win games without driving in runs so every time I saw runners on I’d just try to drive them in, put us ahead so we can play our game.”

Wood wasn’t the only freshman who drove in runs. Preston Barnes, who coach Morse called an “athletic freak,”  was fourth on the team with 24 RBI as well as hitting .412 with four home runs and 26 stolen bases.

“He has tremendous bat speed and can definitely run,” coach Morse said. “The stolen bases are only going to go up for him and with the home runs and stolen bases this year he had a great year. We’re looking for really big things out of him in the future.”

For the majority of the season, Wood occupied the third spot in the batting order while Barnes held down the fifth spot. In the sixth spot was Young, another freshman, who hit .330 and drove in 22 runs and learned a new position, outfield, while he did it.

Another young Admiral that had to learn a new position was the seven-hole hitter. Surprisingly, he wasn’t a freshman. He was younger than that. Eighth-grader Brady Morse was slotted in the seventh spot for much of the season, driving in 22 runs and defensively played third base, a position that his dad, Paul Morse, said he had never played before.

“We’re excited for him as a coach and a coaching staff but also as a dad,” coach Morse said. “He has put in a lot of hard work over the years and starting to see some of that pay off for him is great to see.”

Morse was followed in the lineup by Larmour, who rose into the lineup late in the season and secured the designated hitter spot.

In his late season surge, Larmour hit .292 and had a .435 on base percentage, including picking up one of the four Danville hits in the season’s last game against Rockcastle County. He also added seven strikeouts in 12.1 innings on the mound and a 3.41 ERA.

“He did a tremendous job. Jaden can hit, swing the bat, bunt, move guys over,” coach Morse said. “He’s learning to throw that submarine style as well. He picked up some saves for us and those chances will increase for him in the future.”

Those numbers certainly give Danville hope for future years. And that’s not including Howe, whose season was cut short after sustaining a broken elbow in April.

“Losing Christian hurt us a lot but he’s chomping at the bit right now to get back,” coach Morse said. “Having three arms like that coming back next year has us excited.”

Along with Howe and Wood, the third arm Morse alluded to is Cayden Shaver. While it’s easy to get lost in the freshmen, Danville will return Shaver as a senior next year.
He was second on Danville with nine home runs, 49 RBI, hit .419 and posted a 1.58 ERA along with a flawless 10-0 record in 71 innings pitched.

Couple Shaver with another returning starter, center fielder Jacob Crank, who led Danville with 12 doubles and a .567 on base percentage while knocking in 31 RBI’s and it’s easy to see why the future is bright for the baseball Ads.

“I really think we have a chance to go to state in the next three to four years,” Barnes said. “It’s just really cool to see how young we are now but still being able to beat some of these older teams.”

“The future, that’s what’s so exciting,” Wood said. “Knowing that most of our team is made up of really young kids is exciting. We want to win an All-A State, we want to win region, and I think we have a real chance to win a state championship while we’re here.”