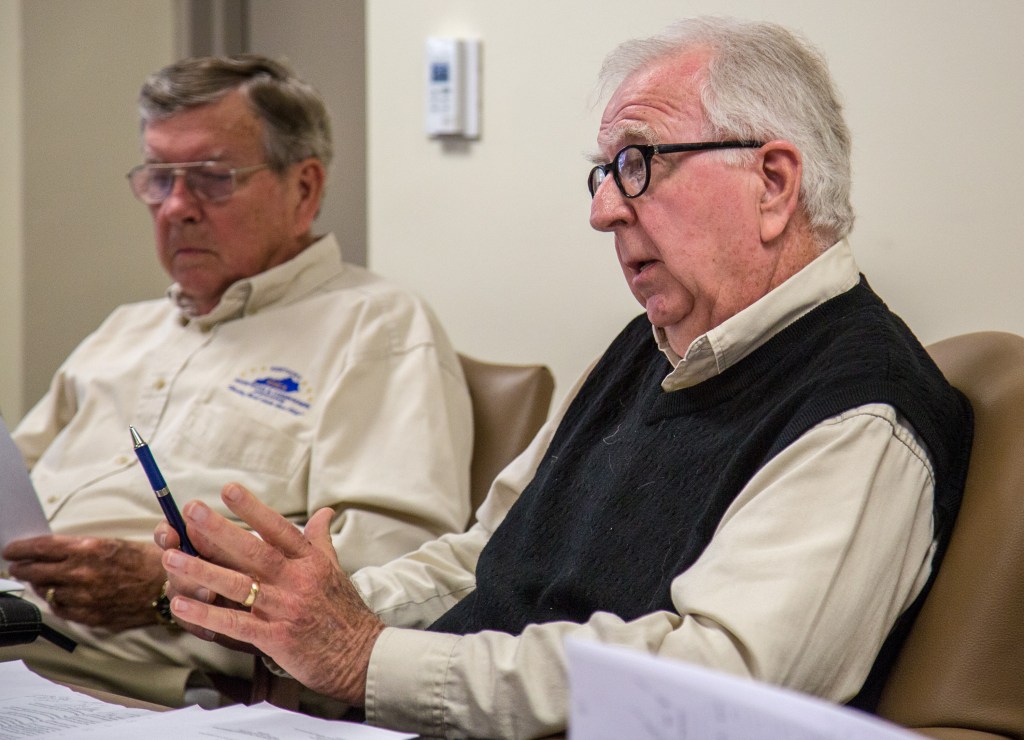 (File photo) Boyle County Magistrate John Caywood speaks during an April meeting of the Boyle County Fiscal Court. The fiscal court approved restoring funding for Main Street Perryville this week, but Caywood said he would still like to see the City of Perryville put some "skin in the game" and provide some funding for its Main Street organization.

Judge-Executive Harold McKinney opened up the discussion to reconsider the funding by reminding magistrates about the new funding arrangement coming into play for Main Street Perryville, Heart of Danville and the Danville-Boyle County Economic Development Partnership.

The county voted in April to allocate the full $70,000 requested by the EDP, but provide only $30,000 to Main Street Perryville. McKinney, as well as some magistrates, suggested at the time that the City of Perryville should have to come up with the other $10,000 it was requesting, so it would have some “skin in the game.”

Tuesday, after McKinney introduced the item on the agenda, Magistrate Dickie Mayes spoke at length about the improvements made over the years in Perryville, and how stable funding for the program needed to be kept up in order to continue the positive changes.

Mayes said revitalization efforts began way before Main Street Perryville was around; he said as far back as the ‘70s, he recalls residents and others being interested in taking advantage of Perryville Battlefield as the biggest tourist attraction in Boyle County.

“This needs to be a stable (program) instead of just some volunteers, and that’s what this money will go toward,” Mayes said. He said the Main Street coordinator (Vicki Goode) had worked very hard for years, as well as many others.

“When you drive through there now, it’s not just dust and weeds growing up …” Mayes said. He described how much work has been put into the town and explained some of its history. “I’m just trying to show you, all this just didn’t happen yesterday.”

Mayes made the motion to restore funding for Main Street Perryville to what the organization received this year — $39,215 instead of $30,000. Magistrate Phil Sammons seconded the motion and it passed unanimously.

Sammons took an opportunity to take exception to something he read quoting a council member in Perryville. “I didn’t like it at all that one of them made the comment that they didn’t even think they had a magistrate in the west end. That kinda disturbed me … it burnt me a little bit,” Sammons said.

“His heart is in Perryville, and he was born and raised in Perryville,” Sammons said of Mayes. “He is a good magistrate in the west end, he does a good job and when he says something, it’s the truth and he means it.”

Magistrate John Caywood brought up a comment he made during the last fiscal court meeting.

Caywood said he wanted to give Perryville some time to work with its budget, but “next year I’d like to see Perryville have some skin in the game … I’m the one who feels like some money from the City of Perryville would send a really good strong statement about the program.”

Sleet said she was grateful for what the county does for Perryville, and “we all need to work together and have a relationship … I love all of you. We will do our part, and we do support Main Street.”

Caywood said, “I know that,” but again suggested the city should put some of its own money in to fund Main Street Perryville.

Caywood said, “I didn’t say how much,” which was met with a round of laughter.