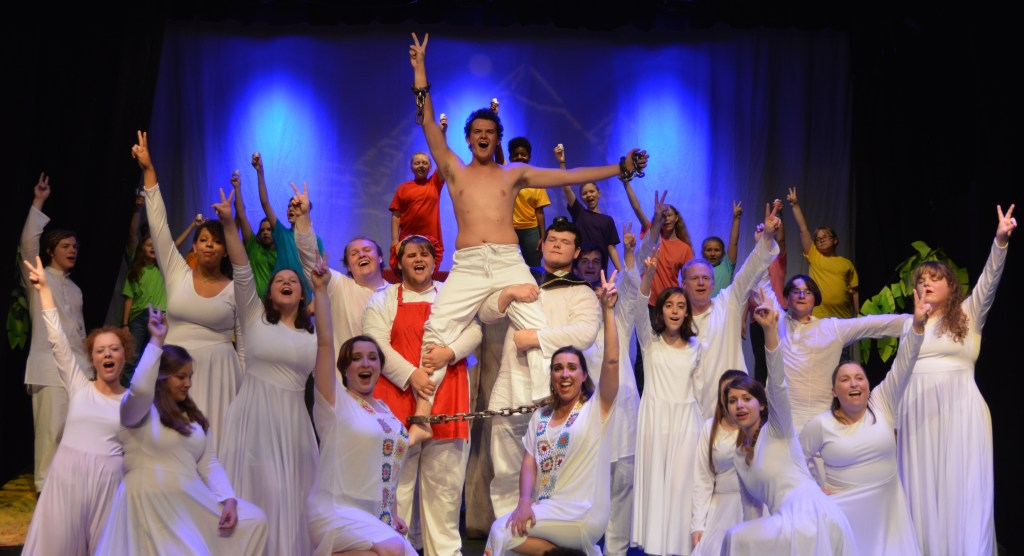 The cast of "Joseph and the Amazing Technicolor Dreamcoat" at Ragged Edge Theater. (Photo by Casey Craiger)

Ragged Edge Theatre in Harrodsburg is putting on a play that’s pulled from the pages of the Old Testament: Joseph and the Amazing Technicolor Dreamcoat.

“I hope people leave this show feeling uplifted by its message … forgiveness and redemption,” said Frieda Gebert who is directing the play. 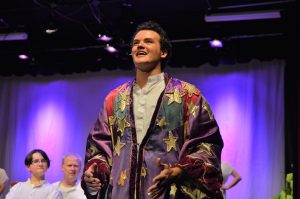 Devin Casey of Lawrenceburg portrays Joseph in the play. (Photo by Casey Craiger)

The play is based on the story in Genesis of Joseph and his coat of many colors. Jacob, the founder of Israel, was father to 12 sons. He loved one of them more than the rest — Joseph. To express his love for his favorite son, Jacob gave Joseph a splendid coat that made his brothers jealous. The brothers, in angst, kidnapped Joseph and sold him into slavery in Egypt. Through hard work and talent, Joseph gained his freedom and saved his brothers when a famine strikes Israel years later.

The storyline was just one of the many reasons Gebert wanted to assist in the production.

“I wanted to do this show first and foremost because it would be my first show by Andrew Lloyd Webber. I love his work and have always wanted to be a part of one of his musicals,” said Gebert. “And all the attention drawn to the recent telecast of ‘Jesus Christ Superstar’ has brought Webber’s work back into the spotlight in a big way.”

The play, chalk full of musical numbers, incorporates an entire children’s choir. The 40-member cast includes talent of all ages, with the youngest being 7.

“My most pleasant surprise in casting was having the perfect Joseph audition for the role. Devin Casey (of Lawrenceburg) came to the auditions with the entire show memorized, note perfect. He brings a level of professionalism to the production that I had not even dreamed of,” Gebert said.

Gebert also noted that she found not one, but two incredible narrators. Gebert said the Narrator’s role is often split between two people, as it is the constant presence onstage telling the whole story in song.

Gebert says the play has a large target audience. “Joseph is definitely family-friendly. It has a great deal of humor as well as a great moral to the story. Kids will love it, but adults will get all the jokes,” Gebert said.

Gebert also noted the catchiness of songs such as “Go, Go, Go Joseph” within the play.

“I think (the audience) will also leave with melodies that will run through their mind for days.”

“Joseph and The Amazing Technicolor Dreamcoat” will be showing June 14-17 and June 21-24 at the Ragged Edge Community Theatre, 111 S Main St., Harrodsburg. Adult tickets are $10, Senior tickets are $9 and Children age 12 and under can attend for $8. For more information, contact the RECT Box Office at (859) 734-2389 or visit www.raggededgetheatre.org.