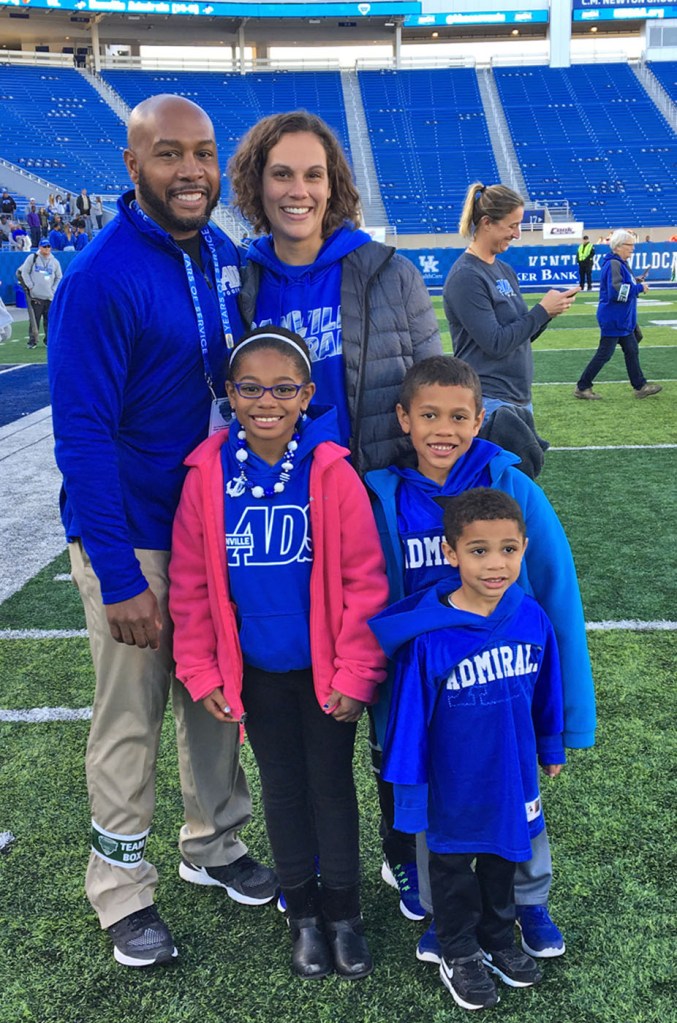 Photo submitted Ernest Dunn with his wife, Karin, and their children Avery, 9, Triton, 6, and Mason, 4, at the Danville State Championship Football Game on Dec. 2, 2017.

For Danville native Ernest Dunn, becoming an assistant principal at Danville High School is an honor.

“I got into education because I wanted to teach and coach at Danville … I loved my experience at Danville High School and the Danville Schools and I want to make it that way for kids coming through now,” Dunn said on Thursday.

The announcement was made late Tuesday afternoon that Dunn would be joining Principal Haley Ralston and Assistant Principal Chris Murray.

Dunn, a 1998 graduate of Danville High School, began his teaching career in 2005 as a special education teacher at John W. Bate Middle School. In his 13 years, he has also taught at Jennie Rogers Elementary and Mary G. Hogsett Elementary. He’s spent the last two and a half years at Danville High School as the student engagement coach.

Dunn said as the student engagement coach, he spent a lot of time helping students who were having academic or behavioral problems at the school. He would assist teachers in the classroom as well as work with students individually in his own classroom.

“I enjoyed it. It was something different every day,” Dunn said.

He also served as a facilitator between students in dual credit classes and their professor and as an Upward Bound Sponsor.

Dunn has also been an assistant football coach since 2005 and has coached in other capacities in the district.

He believes his background in special education will assist him in this new role at the high school.

“I’ve been able to deal with a lot of different students,” Dunn said.

Many of the students he now sees at the high school came into contact with Dunn at the elementary level, too.

“It’s funny, I remember them as the little kindergartener,” Dunn said. “I actually went to high school with some of their parents. I’ve known them their whole lives.”

While he said that carries some positive and negative aspects, Dunn believes there’s more positives to having known the students that long.

“I’ve been able to build a relationship with them,” he said.

Dunn lives in Danville with his wife Karin, a 2000 Danville High School graduate, and their three children, Avery, 9, Triton, 6, and Mason, 4.

In a release sent out by the district, Ralston said it was a “pleasure” to bring Dunn to the administrative team.

“His knowledge and experience, combined with his dedication to students, staff, parents and the community, make him the perfect addition to our administration team,” she said.

The appointment was made by the high school’s site-based decision-making council and is effective July 1.