Bookworm: Kids who are fans of military history book will be into ‘More Deadly than War’

It was just a little poke.

That’s all. Maybe you winced; maybe you barely even felt it, but you do it every year because it’s the best way to keep from getting sick. And once you read “More Deadly than War” by Kenneth C. Davis, you’ll know that getting your flu shot could be a matter of life or death.

In the spring of 1917, because of a “bloody mess” in Europe, President Woodrow Wilson “asked Congress to take the nation into war…” Americans, filled with patriotism, swung into action: factories sprang up, production of raw materials increased, and the war effort “transformed American life” but it also offered perfect conditions for a pandemic. 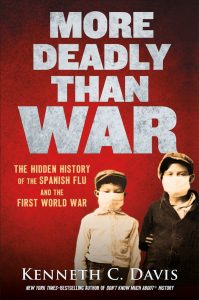 They say it started on the Kansas prairie.

On the morning of March 4, 1918, Fort Riley company cook Private Albert Gitchell complained of a “bad cold,” and was quarantined. Within minutes, two other soldiers entered the infirmary with the same complaints: body aches, sore throat, headache, fever, but this was not a normal cold. By lunchtime, more than a hundred soldiers were on the Fort’s sick list; by weeks’ end, more than 500 men were stricken.

Throughout the summer of 1918, as American soldiers fought “in the blood-soaked muck of European trenches,” folks back home were dying of what, due to politics, had been named the Spanish flu. But really, the name meant nothing: officials had few clues about what was causing people to sicken and die so quickly.

By the fall of 1918, hospitals around the world were filled with flu patients. Health care workers fell ill, too; in Alaska , populations of entire towns were nearly wiped out. Rich and poor alike were stricken, children were orphaned almost overnight, and bodies were stacked in morgues “like cord wood;” in New York City alone, more than thirty thousand people died. More Americans, in fact, died of the flu than were killed fighting World Wars I and II, the Korean War, and the Vietnam War combined. And in 1997 – eighty-one years after its outbreak – scientists finally got a big break in solving it…

Can it happen again? That’s a question your middle-schooler may ask as he reads this book; it’s something you may wonder, too, and “More Deadly than War” explains the somewhat-chilling truth.

As this “hidden history” unfolds, and considering what we know today, it’s easy to see how the flu spread in 1918: science hadn’t quite caught up with viruses like the Spanish Flu and sanitary conditions weren’t what they are now. On that, author Davis offers details that are gruesome, but not overly so; kids who are fans of military history books especially won’t be fazed, since that information is made relevant in a nicely sophisticated overview of World War I.

And as for the happen-again scenario, Davis examines that, too, and offers some news that could comfort your aware 10- to 15-year-old, especially if he enjoys real-drama tales. For that, “More Deadly than War” is a book you’ll never have to poke him to finish.