Mastin is retiring from show business 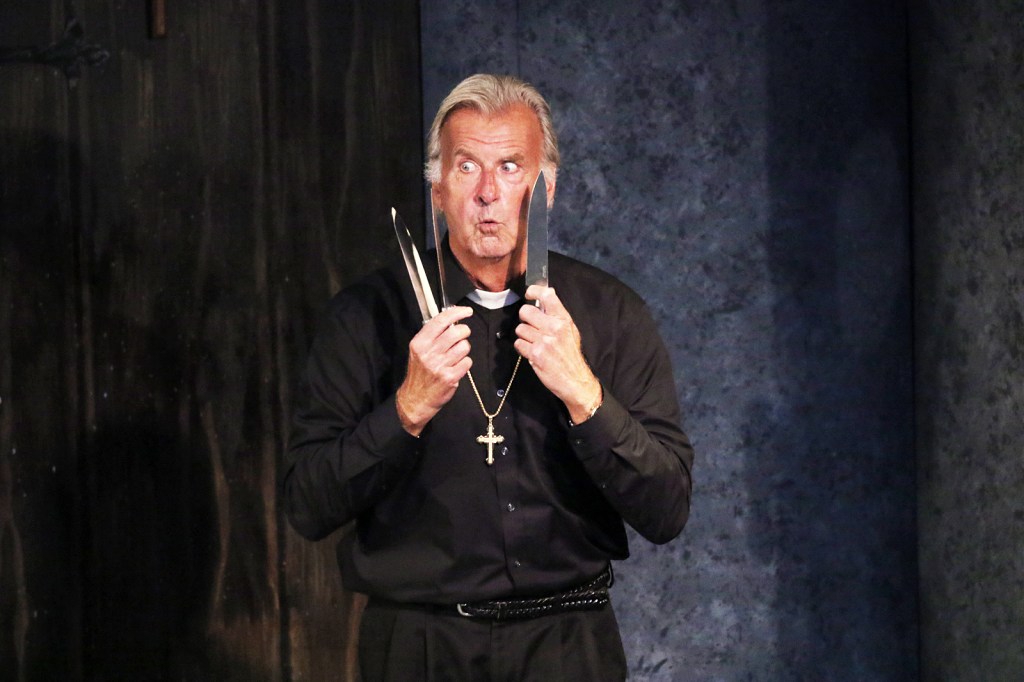 Eben French Mastin is no stranger to the big stage. His numerous performances and lively characters have earned him a place in the hearts of many Danville residents. But after 25 years on the Pioneer Playhouse stage, he has decided to hang up his hat … for now at least. 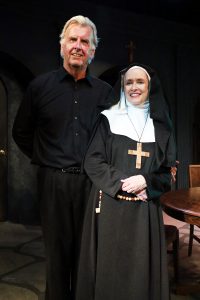 When Mastin’s stint in show business began, he wasn’t an actor. He was a road musician and singer for many years beforehand. During his time as a musician, he played for crowds of 40,000 people. It wasn’t until the founder of Pioneer Playhouse, Col. Eben Henson approached him that he considered pursuing acting.  “He offered me the huge salary of fifteen dollars a week for my first year. I thought, ‘you know, what the heck,’” Mastin said, laughing.

Mastin said he wasn’t opposed to trying acting because he already knew how to memorize songs well, and accepted a role as the judge in an Ephraim McDowell story. He said that following his first play, he “got the bug” and has been performing ever since.

“After a while, I got tired of dealing with musicians and all their problems and drugs and such so I came back for a second year,” he said.

He spoke fondly of the relationship he developed with Henson and his family. He bailed hay on their Henson family farm and helped put shingles on the roof of the Pioneer Playhouse.

Mastin is grateful for his humble beginnings, but takes pride in all the areas he’s dabbled in since.

“I’ve gotten into quite a bit of filmwork, I’ve done a lot of commercials,” Mastin recalled. “I’ve done voice overs and radio spots.”

“I was talked into doing some stand-up comedy as well, which I have never done before” he said.

Mastin opened for Etta May and was given 30 minutes, in contrast to the five minutes first-time comedians are usually provided.

Although he has a diverse profile, he claims his greatest accomplishment is his work in the play, “The Hermit of Ford Fisher” based on the true story of a hermit. It’s performed at a theater in Wilmington, North Carolina; Mastin said he’s performed in front of as many as 900 people there.

“That was so well received that we ended up being asked to do five productions of it,” Mastin said.

The cast has changed each year of the play, but Mastin has always assumed the role of the hermit. “We’ve always done it to standing ovations, to full houses, and they’re actually trying to make an outdoor summer drama tourist attraction of it,” he said.

Mastin’s acting efforts have not gone unrecognized. “I’ve been nominated numerous times for best leading actor in some of the Wilmington theater award shows,” he said. “Plus, I’ve developed a really good fanbase here that just don’t want me to retire, and are trying to bribe me.”

Last year during the play “Drinking Habits”, the normally-300-capacity Danville theater squeezed 450 people in to watch Mastin and his fellow cast members, he said. 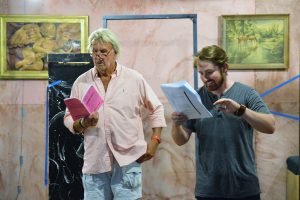 Mastin said choosing a favorite role that he has played is very hard for him because there are so many and he loves them all. He is particularly excited about his returning character in the current play showing at the Pioneer Playhouse, “The Return of Tinker Doyle.”

“I play the major. In the first Tinker Doyle, my wife, while we were in Carrickfergus trying to become sister cities with Danville, ran into an old boyfriend of hers that she had many many many years ago, and I was the jealous husband,” he said.

The second play takes place five years later and the cultural ambassador that is coming from Carrickfergus happens to be her old boyfriend. “Needless to say, my character is not real pleased with that,” he said.

Mastin’s passion transitions into his acting style. Mastin says he’s not a method actor, but he’s gone to a lot of classes that discuss it.

“To me, acting is taking someone else’s words and making them your own,” he said.

Mastin’s style involves learning the script and developing the character as he goes along based significantly on his personality. “It’s a freestyle, I call it,” he said.

Although he doesn’t follow a specific acting method, he does follow techniques used by some of his favorite actors. “I like Robert De Niro and Sir Laurence Olivier. One of the people that I’ve fashioned a couple of roles from is Gale Gordon in ‘The Great Gildersleeve.’ He had a certain way of talking, and I started copying his mannerisms and speech.”

Mastin says he hasn’t had trouble adopting any characters, but monologues are another story. “In my early days here I would sit up until three or four o’clock in the morning trying to learn two pages of monologue,” he said.

Despite his efforts to remember his lines, Mastin can remember times he forgot them during a performance. One year, in a play put on by Pioneer Playhouse titled “Death Trap,” Mastin’s character had a very lengthy telephone conversation.

He said this continued until the other actors on stage caught on and were able to give him a hint that got him back on track. 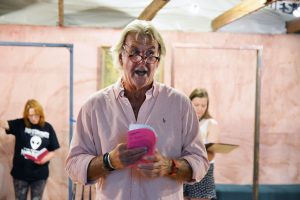 However, when he knows his lines a little too well, Mastin says they can sneak their way into his everyday life. “Sometimes a line will pop into my head and when I’m in public somewhere I’ll say something silly like one of the lines from the play,” Mastin said. “Or sometimes I’ll walk around my house in character and my wife and kids don’t understand what I’m doing.”

Mastin feels as though his time in the spotlight led to him not spending as much time with his wife and kids as he would have liked to. He said now that he has three grandchildren, he realizes the value of family time and is excited to spend time with his family. He may return to the stage one day, but he doesn’t know when that may be.