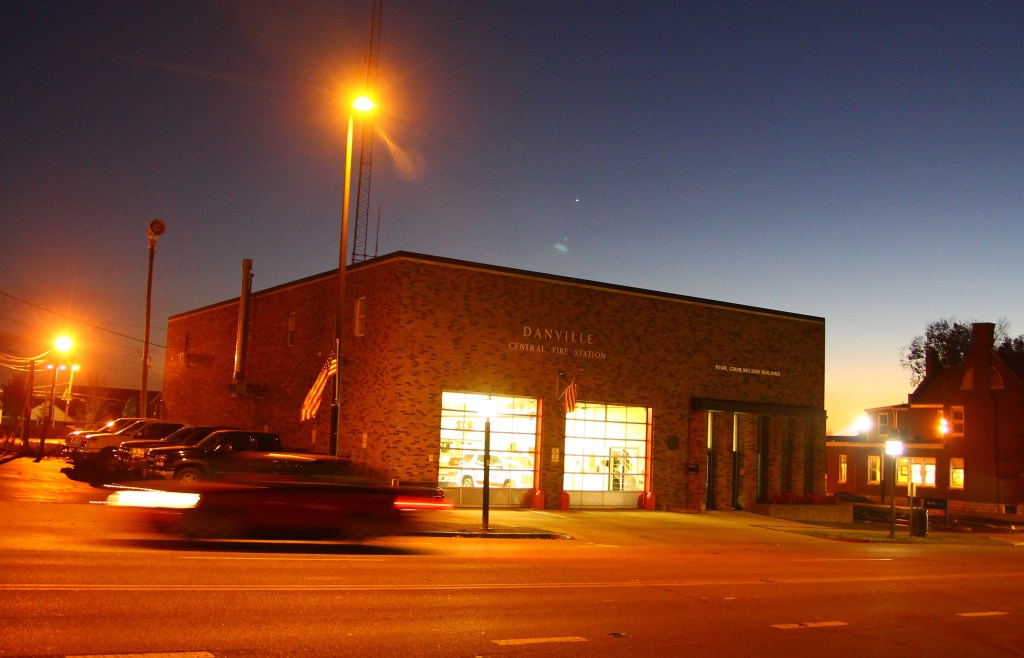 File photo A car passes by the Danville Central Fire Station along West Main Street just after sunset in the fall of 2016.

“We’re going to begin to enter into some deliberations that is pretty much a milestone for this commission,” Mayor Mike Perros said before the commission went behind closed doors just after 12 p.m. Monday. “Our present fire station — as everybody knows — is 50 years old. So the decision we’re going to make here — whatever that outcome is, through deliberations, through study, through discussion — the outcome of that decision is going to be significant for the next 50 years, we hope, if not longer.”

The commission entered executive session using Kentucky Revised Statute 61.810 (b), the standard exception to open meetings law that allows legislative bodies to deliberate “on the future acquisition or sale of real property … only when publicity would be likely to affect the value of a specific piece of property.”

State law allows for closed-door discussions on property and several other narrowly defined topics, as long as the public agency gives notice in open session about the “general nature of the business to be discussed, the reason for the closed session and the specific provision” of state law that allows closed session.

The commission emerged from closed session at 1:58 p.m. Perros announced no action had been taken — a requirement of state law — and the commission quickly adjourned.

Monday’s special called meeting agenda had also included plans to discuss the possibility of forming a “tax increment financing” (TIF) in Danville, but that discussion was canceled.

Perros said prior to entering closed session that the TIF district, “while an important topic, it is not nearly as significant as the discussion of the fire station and public service and fire protection.”

In May of 2017, the Bravura Corporation completed a study of Danville’s Fire Station No. 1, located on West Main Street west of Fourth Street, finding a host of problems with the aging structure.

“The back wall — and the front wall, for that matter — are not structurally attached to the second floor, and it’s pulling away from the main structure,” structural engineer David Ahnquist told city commissioners at the time. “The biggest problem is you have to attach the front and rear walls to the building. That’s a very big concern of mine. I don’t know how long they’re going to stay the way they are.”

Ahnquist and four others who were paid $27,400 to complete the study documented shortcomings ranging from out-of-date restroom facilities; to a structurally questionable concrete slab that fire trucks can’t park on for fear of collapse; to corroding metal that’s potentially leaving electrical wiring exposed in heavily trafficked areas.

“I think that repairing these problems will be incredibly expensive and time-consuming for a building that, quite frankly, has outlasted its usefulness,” Ahnquist said at the time. “I think reinforcing the walls would be more expensive than building new ones. Due to all that, in my opinion, the best option for the city is rebuilding and not trying to use this one at all.”

Other issues identified by the engineers include:

• the building has no sprinkler system;

• there is no designated space for decontamination — a standard need for modern fire stations;

• there may not be enough emergency exits from the basement or second floor;

• there is a lack of insulation in the walls and weatherstripping around doors and windows;

• there are multiple cracks in the walls that may be due to the building settling unevenly;

• according to mechanical engineer Nick Morgan, the building’s HVAC units are “rated for mobile home use, so they’re not even of a commercial grade or even a light residential grade;” and

• the building is out of code for the Americans with Disabilities Act, earthquake building codes, National Fire Protection Association codes and modern energy standards.

When the Bravura report was presented, Perros said he was “kind of embarrassed” by the condition of the fire station.