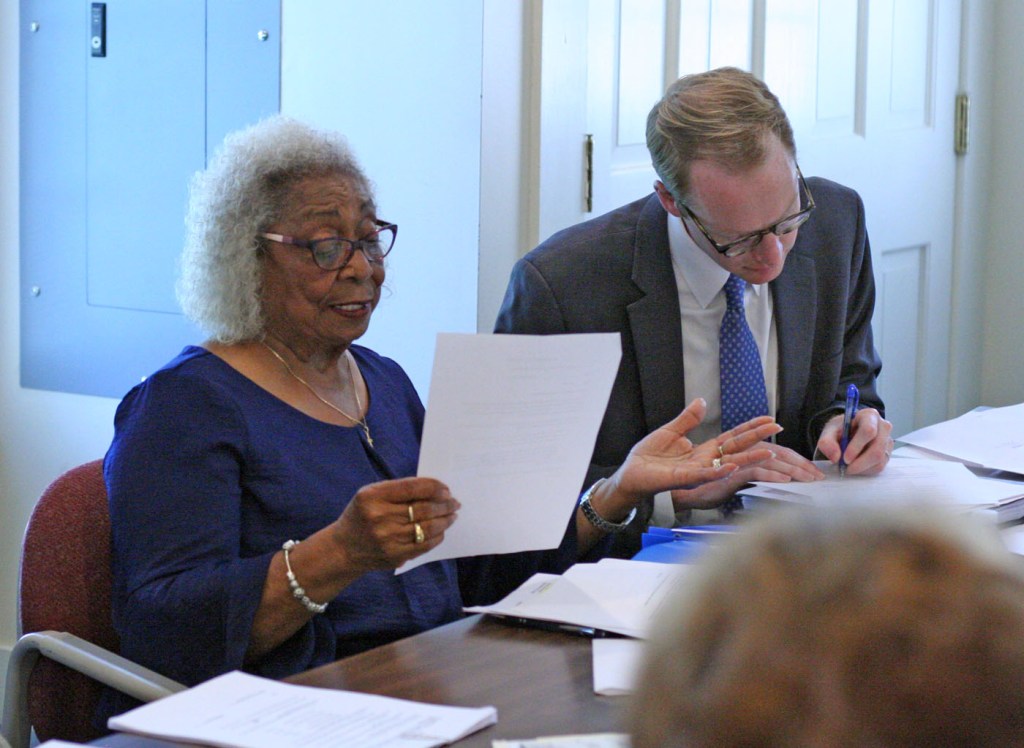 Minutes after it began, a Perryville City Council meeting called to pass a budget turned chaotic Monday, as two members voted to adjourn and left.

However, those two votes did not result in adjournment. After council members Julie Clay and Paul Webb left, the meeting continued, and the council held a first reading of a budget that included funding for a second police officer and a $1,000 contribution to Main Street Perryville.

Immediately after the meeting was opened, Council members Julie Clay and Paul Webb asked Mayor Anne Sleet if anything in the budget being presented had changed from the previous meeting. Sleet said no.

“OK, I make a motion we approve the budget,” Clay said.

Clay restated her motion — “I make a motion we vote on the budget.”

The motion was seconded by Webb and the votes were cast: Webb, Clay and Council member Joann Reynolds voted against the proposed budget and council members Brian Caldwell and Steve Bailey voted for it.

Clay then made a motion to adjourn the meeting, which was seconded by Webb.

At this point, community members in attendance began speaking out, calling the votes “crazy” and “stupid.”

Sleet began to ask a question, but was interrupted by Webb, who said, “Mayor, there’s a motion on the floor.”

Some community members told Webb to “have respect” while others continued to question the vote and stand. Police Chief Parker Hatter reminded everyone to stay seated and remain calm.

“There’s a conflict of interest here — she’s on both boards,” Simpson said, speaking to Clay’s participation on the Main Street Perryville board and her status as a Perryville City Council member.

Clay said in a previous meeting that she wanted the budget to reflect funding for Main Street Perryville; previous versions of Perryville’s budget did not include such funding.

“I stand by motion to adjourn,” Clay said. “I will not remain here.”

Clay and Webb began to leave, but Clay stopped to respond to community members calling her participation a conflict of interest.

“There’s nothing in this budget included (for) Main Street; there is no conflict,” she said. “I’ll be happy to answer your questions in-person outside.”

After Webb and Clay left, council member Brian Caldwell said, “I would like to go on record saying I did vote for a very responsible budget.”

The statement was echoed by council member Steve Bailey.

Attorney Winfield Frankel initially cautioned them that if a budget was not passed, last year’s budget would stand.

Reynolds asked if there was enough money available that the city could support Main Street Perryville.

Boyle County Fiscal Court previously voted to provide $30,000 in its budget for Main Street Perryville — more than $9,000 less than the non-profit has been receiving annually. Members of the fiscal court said they hoped the city would step up to provide the remaining funding, but it seemed Perryville did not have the capacity to cover the gap. The fiscal court voted last week to restore full funding for Main Street Perryville for the 2018-19 fiscal year.

Sleet said Monday night, “I was going to ask the council if they would agree to pull some money out of here and give (Perryville) Main Street some money. I don’t know what their problem is.”

Caldwell said he thought Main Street Perryville was under that assumption, which Goode said was the case.

Frankel then stopped further discussion to research the KRS regarding quorums. Frankel said based on a specific statute, he believed the council still had a quorum, if the remaining members wanted to continue the meeting.

“We’ve got 60 percent of the members here with or without Ms. Clay and Mr. Webb,” Winfield said.

The remaining members voted to continue the meeting rather than adjourn.

Caldwell told Reynolds that they could discuss the budget and add a line item for Main Street Perryville.

“(I) attended the fiscal court meeting and I do totally agree with them that we need to have some skin in the game,” Caldwell said.

Bailey made a motion that the council add $1,000 to the budget for Main Street Perryville, which was seconded by Reynolds; all three members voted to approve the decision.

Sleet thanked the council members for their vote. The council then held a first reading of the budget, including the new allocation of $1,000 for Main Street Perryville.

The budget includes projected expenses of $292,562 and projected revenues of $293,148, leaving a balance of $586. The remaining council members voted in favor of the first reading 3-0.

Sleet said multiple calls have been fielded from people interested in the new part-time police officer position, which is funded in the proposed budget. Only one of those callers was qualified, she said.

Frankel then told Sleet to hold that conversation for another meeting.

Sleet said she wasn’t sure why Clay and Webb got angry or left. This year is the first time she knows of that the council has had such trouble passing a budget, she said.

The council then voted unanimously to adjourn.

After the meeting, Goode said Main Street Perryville is appreciative of the money the city has allocated.

“We’re pleased that the city of Perryville made that donation to Main Street,” she said. “It’ll go toward restoration of a city-owned building. We still have five to finish.”

Main Street Perryville rents the city-owned buildings at little cost, but has agreed to maintain them. They rent the buildings out to tenants and keep the money received from that rent to make further improvements to the buildings.