Mira Daugherty, APRN, an advanced practice provider, will be joining the staff at Ephraim McDowell Liberty Family Medical Center on July 2. She will provide primary care to patients 13 years of age and older. 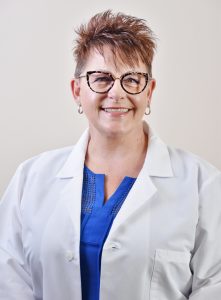 Mira earned her bachelor’s degree in nursing in 2009 from Eastern Kentucky University and her master’s in nursing in 2017 from the University of Cincinnati. She is board-certified by the American Academy of Nurse Practitioners and has a special interest in adult gerontology.

Mira and her husband, Troy, live in Hustonville. They have three children and a grandchild. During her free time, she enjoys doing anything outdoors, running and cooking.

Diana King, APRN, FNP-C, an advanced practice provider, has joined the staff at Bluegrass Immediate Care. She is providing walk-in care to patients of all ages.

Diana earned her bachelor’s degree in nursing in 1997 and her master’s in nursing in 2004, both from Eastern Kentucky University. She is board-certified by the American Academy of Nurse Practitioners and has a special interest in acute and urgent care of patients and patient education.

Diana and her husband, Mike, live in Crab Orchard. They have three sons and one granddaughter. During her free time, she enjoys reading, spending time outdoors and traveling.

• Mark Lyons of Harrodsburg was promoted to the position of carpentry supervisor on May 16. Lyons began his employment at Northpoint as a correctional officer in April 2004.

• Raymond Bradley of Mount Vernon was promoted to the position of classification and treatment officer on June 1. Bradley began his employment at Northpoint as a correctional officer in June 2016.

• Shawn Berry of Stanford was promoted to the position of correctional sergeant on June 1. Berry began his employment at Northpoint as a correctional officer in January 2017.

Ephraim McDowell James B. Haggin Hospital is pleased to recognize and honor one of its nurses for her extraordinary patient care. Ann Honaker, RN, a nurse on the Medical Surgical Unit, was one of many nurses nominated for the DAISY Award.

A resident of Lincoln County, Ann has been caring for patients at Haggin for 19 years.

She was nominated for the award by a coworker that said, “Ann is truly one of the most caring, kind and compassionate nurses and she is frequently complimented by her patients and co-workers. These traits are not taught, but they are genuinely who she is. Ann takes time with her patients to make them feel like they are the only one she has to care for.  Ann is an excellent nurse.”