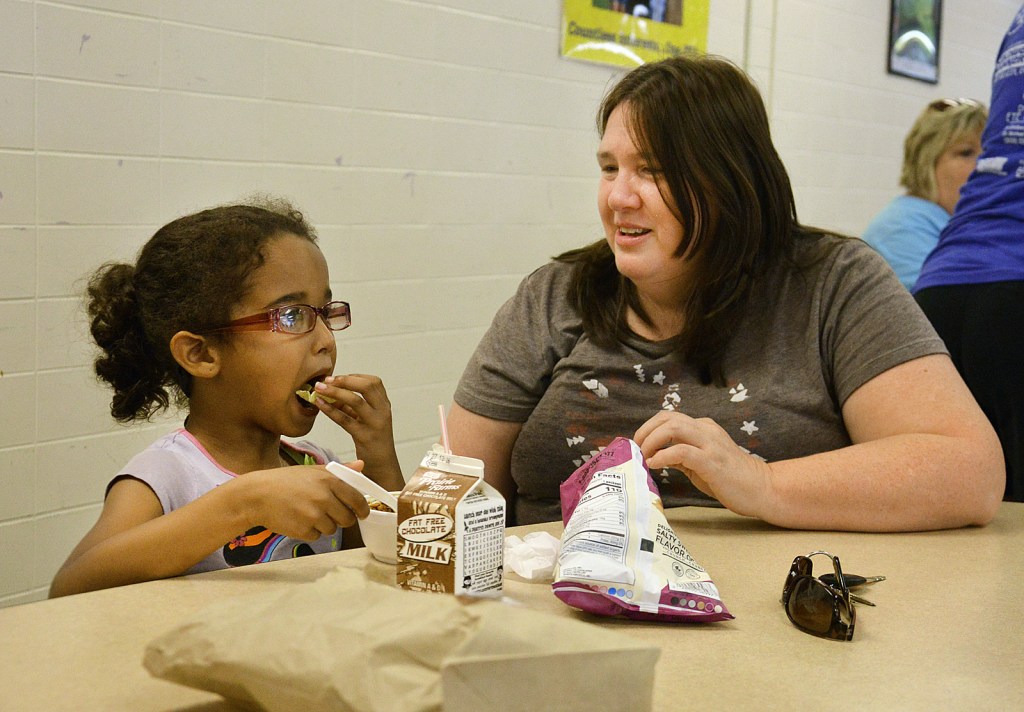 Michelle Valdis, 5, of Perryville has a lunch of taco meat with cheese, sauce and chips as her mom, Shara Valdis makes sure she eats all of her meal. (Photo by Robin Hart)

Throughout Danville and Boyle County, kids can eat for free this summer. 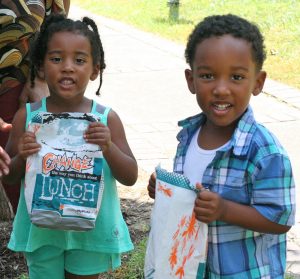 Kendra Peek/kendra.peek@amnews.com
Reuel, 3, and Roman Watson, 4, smile after getting their cheeseburgers on Wednesday. Roman said he really liked cheeseburgers.

Funded in part by KY Kids Eat, the Boyle County and Danville Independent school districts are serving up meals for anyone 18 and under at select sites around the city and county.

“There’s a need in the community and we’re trying to fulfill that,” said Judy Ellis, Boyle County food service coordinator.

Ellis said the Boyle County School District fed, on average, about 200 kids a day last week. This week, the number rose to more than 800 kids thanks to Black and Gold, a one week summer camp hosted by the district.

Ellis said they also feed about 50 students at night due to participation in a summer intervention program.

As the summer progresses, she said they will likely see an increase in participation. They will also feed students participating in is sports and band camps.

The average, she said, could get close to 350 children a day.

According to Kelly Bedtelyon, senior media manager for the Danville Independent School District, 2,883 total meals were served last week, while more than 4,000 have been served this week by the district. 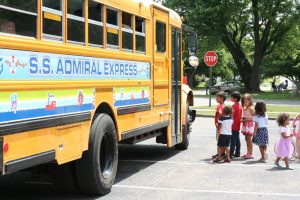 Patty Taylor, food services director for Danville, said the number will vary throughout the summer, increasing near end of the month and likely decreasing around the July 4 holiday week.

According to information from KY Kids Eat, 844,834 lunches were served statewide as part of the program in June 2017. This represents an increase of 14.1 percent in lunches served compared to the year before.

“When school lets out, too many children lose access to the school breakfasts and lunches they rely on during the school year, increasing childhood hunger and stretching family budgets during the summer,” said Kate McDonald, KY Kids Eat campaign coordinator at the Kentucky Association of Food Banks in a press release from the campaign.

David Hollon and Liz VanHook, Danville employees, ask children if they prefer white or chocolate milk as they hand out meals from the steps of the SS Admiral Express.

The bus is one that was surplussed out by the district and has been converted to serve the new purpose of feeding children. 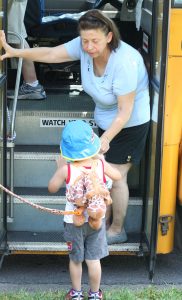 A  bus driver in the district, she is driving the SS Admiral Express for the summer, which goes from site to site in the city.

This is VanHook’s first year working to serve food; she said she brought her grandson to receive meals last year, along with several other district employees who bring their children to the sites.

“I knew they did this in the summer — it’s great. When you do the whole route, you see kids in need,” she said.

“It breaks my heart to think they may not get anything else,” he said.

He and his wife are in charge of serving food in the evenings at Millennium Park as part of the program.

Mom Shara Valdis said she appreciates that she can bring her daughter Michelle to the Boyle County High School site each day, where she knows she will get a healthy meal. The two live in Perryville, but Valdis said they try to come each day to the high school after visiting the park.

“But it just depends on if I have gas money,” she said. 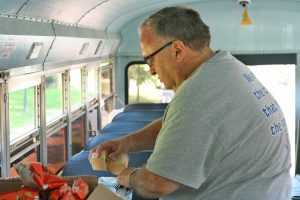 For Boyle County, it takes about five to six staff members across all the sites to ensure the program’s success in the summer. Ellis said they tried to maintain the same people at each location because the continuity is important for students.

“They get used to seeing the same person,” she said.

Wherever children are eating, Ellis and Taylor believe it’s a good thing. Both extended an invitation for any kids to join them at the sites.

Children do not have to show that they’re enrolled in either school district or proof of residency. They simply must be 18 or under.

The program continues through Aug. 3, with sites being closed on July 4.