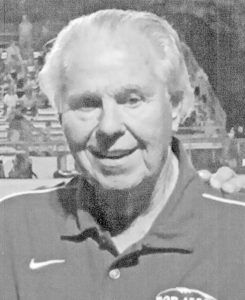 He was born on November 12, 1934, and was the oldest son of the late Dr. and Mrs. George McClure, Jr. He was also a grandson of the late Professor George M. McClure, Sr. Mr. McClure was married to Patsy Moberly McClure for 46 years, and leaves surviving him three sons, George McClure IV (Darcy), of Fort Collins, Colorado, Joey Kirk (Laurie), of Danville, and Patrick McClure (Jennings), also of Danville. He is also survived by a sister, Edith McClure Crawford, of Colorado Springs, Colorado and the Kirk, Caudill, Moberly and Crawford families. George was predeceased by a brother Jimmy McClure.

Mr. McClure attended Danville Schools through the eighth grade and then graduated from the Hill School in Pottstown, Pa., in 1952. He matriculated at Princeton University, Princeton, New Jersey graduating in 1956. Upon graduation he was commissioned a 2nd. Lt. in the U.S. Marine Corps and was on active duty for three years. After military service he attended the University of Denver College of Law, Denver, Colorado, graduating in 1963.

He then commenced a career as a lawyer which extended over 50+ years, both in Colorado and in Kentucky. He returned to Danville in 1969 and in 1972 was appointed as the Boyle County Attorney, an elected position which he held for 30+ years, retiring in 2002. He thereafter practiced with his son, Patrick, for 15 years in the firm of McClure & McClure, which is now McClure, McClure, and Bailey.

Mr. McClure belonged to several professional associations and was very active in local Democratic politics for many years. During his years in Kentucky he had been active as a ham radio operator, learned to fly, and participated in the West T. Hill Community Theatre for several years. He enjoyed playing golf and taking trips with his “golfing buddies” and he was an avid bass fisherman enjoying family fishing trips to a very special place called Otty Lake in Canada, and a lifetime on Herrington Lake.

Those kind persons desiring to make memorial contributions may do so to Ephraim McDowell Foundation or the charity/organization of their choice. Online guestbook at www.stithcares.com