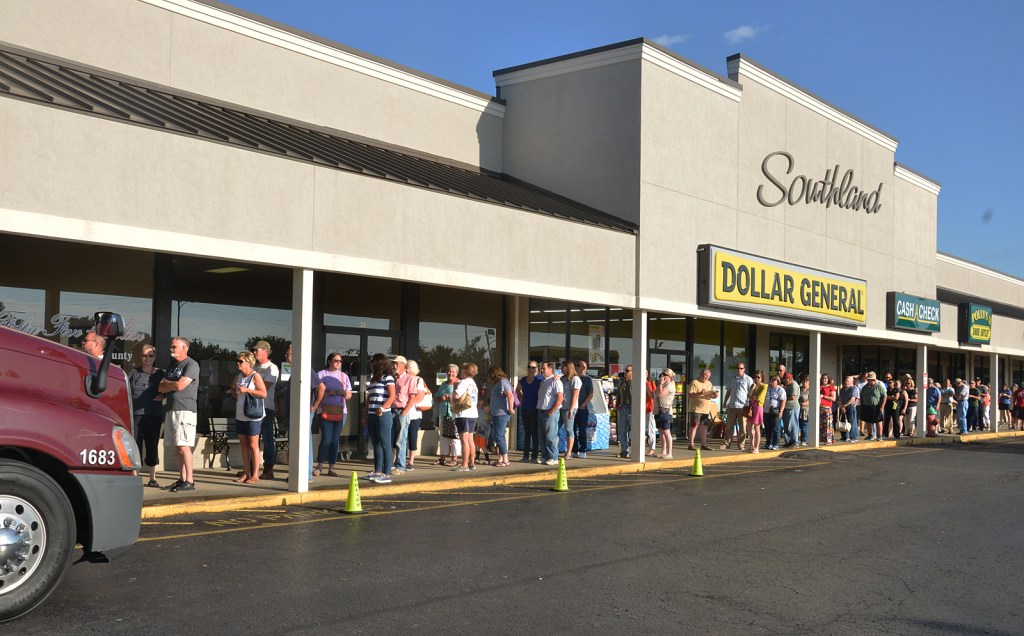 Photos by ROBIN HART robin.hart@amnews.com At 8 a.m., people were lining up for the Peach Truck delivery.

The Peach Truck Co. brought a refrigerated semi truck loaded with 1/2 bushel cartons of fresh Georgia peaches to Danville Friday morning. The truck parked in front of Ace Hardware, which hosts the semi-annual event, and by 8 a.m. people were lined up past four other businesses to make their purchases. The Peach Truck was only selling the fruit for about an hour and a half before shutting its doors and traveling to Richmond and Winchester. Rick Haley, host of the Peach Truck Tour said the Peach Truck will return in exactly three weeks, on July 13.

Ira Adams, on Eubank, carries a bushel of peaches to his car Friday morning.

After loading up with peaches, Lynn Foster, left and Erika Campbell, bought canning jars at Ace Hardware. When asked if they were going to can peaches, the ladies laughed. Foster said “Not really! We’re going to can tomatoes from 100 plants!” Campbell said she’ll make peach preserves, but peaches are much better frozen than canned.

While waiting in line, shoppers place their orders for peaches and pecans and are given tokens as a receipt of their payments. All they have to do is walk up to the back of the semi and pick up their peaches. If they can’t carry the heavy boxes, they’re invited to drive around and the workers will load them into their vehicles.