Daniel E. McKay has been appointed to the position of president and chief executive officer for Ephraim McDowell Health. McKay will assume his duties on Monday, July 16.

Since 1993, McKay has been employed with the Community Health System (CHS) based in Franklin, Tennessee. 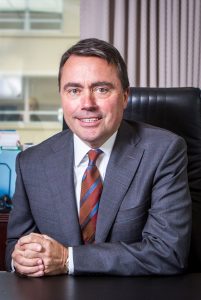 From 1993 to 1994, McKay was assistant chief executive officer at Parkway Medical Center, a 120-bed hospital in Decatur, Alabama, where he was responsible for ancillary departments and physician recruiting. From 1994 to 1995, he was chief operating officer at Highland Medical Center in Lubbock, Texas, before he spent five years as CEO of Moberly Regional Medical Center in Moberly, Missouri. During his tenure there, the 114-bed hospital developed a cardiology program, recruited more than 30 physicians and established outreach clinics in five communities. He was selected as Moberly’s Businessman of the Year, presented by the Rotary Club.

McKay served six years as CEO at Springs Memorial Hospital, a 220-bed hospital in Lancaster, South Carolina, and then was promoted to CHS’s vice president of operations Division II, where he supervised the overall operation and performance of 16 hospital CEOs.

From 2008 to 2010, McKay was vice president of Eastern Operations for Quorum Health Resources, responsible for a region that covered 15 states and 70 hospitals and then briefly oversaw operations for 11 hospitals in New Mexico and Oklahoma before being named market CEO for Northwest Health System – CHS in Springdale, Arkansas.

For the past four years, he has been market CEO for Sparks Health System – CHS in Fort Smith, Arkansas.

Over the course of McKay’s tenure as a health care executive, he has been recognized as CEO of the Year in 1997, 2002 and 2011. McKay served on the Arkansas Hospital Association Board, the State Trauma Board and represented Arkansas on the American Hospital Association Regional Policy Board. He has achieved significant accomplishments in hospital operations, clinical program development, strategic planning, financial management and medical staff development and relationships.

McKay and his wife, Laresa, will be relocating to Boyle County. They have four children, Luke, Maddy, Lacey and Daniel. During his free time, he enjoys golfing, fishing and hunting.