Personal effects: Pierre the Chef is his name, cookies are his game

Question: What can you tell us about this old cookie jar, Jerry? It belonged to my husband’s grandmother, so I’m guessing it’s from the 1930s to 1950s.

The top half lifts off just below his arms. I saw one like it in an antique shop several years ago priced about $75. I must confess that the top of his hat has been broken off and glued back on, so that will affect the value.

Is something like this ever considered an antique or will it always be a vintage novelty item? What makes the difference? 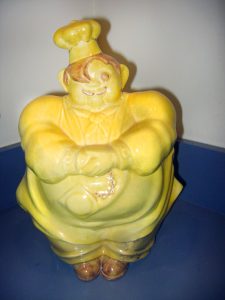 Red Wing Pottery is an American company based in Red Wing, Minnesota and was founded by a German immigrant named John Paul in 1861.

Though they’ve had numerous name changes, they are still very active in the business of manufacturing pottery, stoneware and dining ware.

At its initial release in 1941, this cookie jar was called Pierre the Chef. In later editions he was just called “chef.” I think that I prefer Pierre. He is a classic and I love his somewhat maniacal expression.

Originally, they were issued in yellow — like yours is — blue, tan and a very-hard-to-find green color. He will never be what you would call rare. The design was very popular and thousands were made until it was discontinued in the mid 1950s.

Almost all objects, unless they are disposable or junk that simply will not last, will be antique one day. The scholars’ term for antique is an item that was manufactured before the Industrial Revolution. In America, that would be about 1790 and Mr. Samuel Slater and his industrial mill. Everything after that 1790 date is considered semi-antique. However, that is a whole other story. Thanks for a great question.