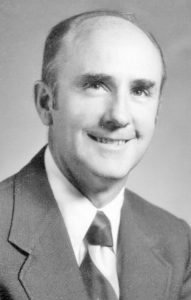 James Jacob Anderson, 84, of Bridgman, passed away peacefully after a long battle with Alzheimer’s on Friday, June 22, 2018 at Woodland Terrace in Bridgman.

A funeral service will be held at 11 a.m., Monday, July 2, 2018 at The Chapel, 4250 Washington, St. Joseph with Reverend Philip Bubar officiating. Friends may meet with the family from 2 – 4 p.m. Sunday, July 1, 2018 at Pike Funeral Home and Cremation Services, 9191 Red Arrow Highway, Bridgman. Burial will be at Graceland Cemetery in Bridgman.

Jim was born January 10, 1934, in Manistique, Michigan. He graduated in 1956 from the University of Illinois with a degree in Mechanical Engineering. The day following graduation Jim began his 32 year career at Whirlpool Corporation. He was involved with ROTC and served his country in the United States Army. On July 12, 1958, Jim married Roberta “Bobbie” Hollensbe and together they raised four children. While raising their family, Jim had a desire to know how to be the father he never had. In that process, Jim searched out how to live as a Christian father and was led into a relationship with Christ by his sister and brother-in-law. He then began to grow in his walk with Christ through the Navigator’s 2:7 course. After moving back to the St. Joseph area Jim was involved in Woodland Shores Baptist Church and then The Chapel. His changed life greatly impacted his family and sphere of influence.