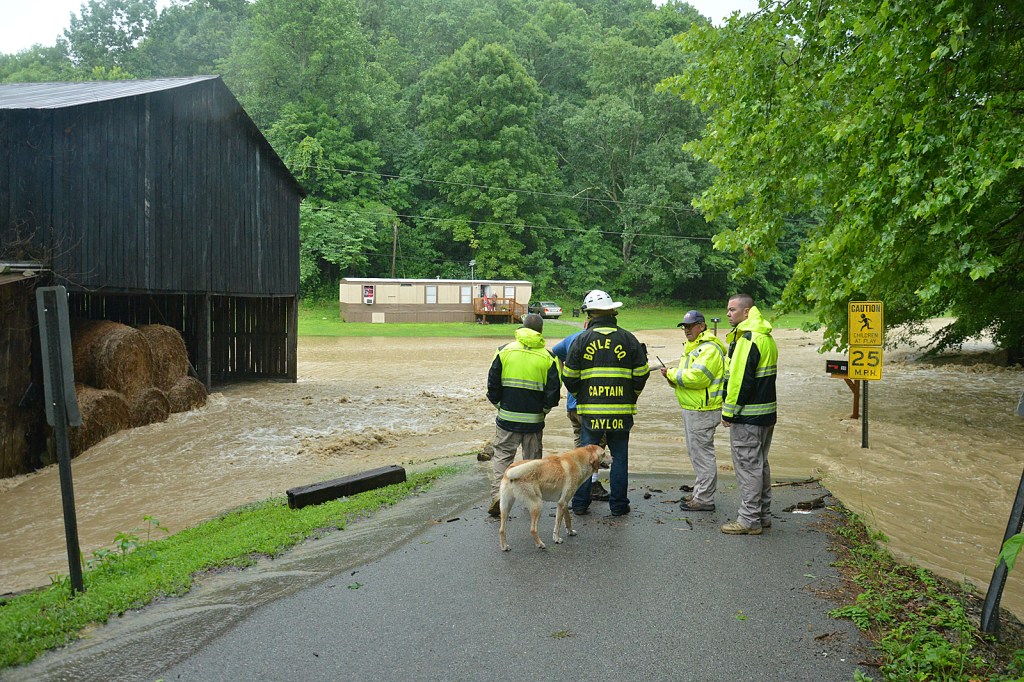 Photos by Robin Hart/robin.hart@amnews.com Flooding across Oscar Johnson Road near White Oak Road in Boyle County rushes through a barn and creeps near a trailer. Boyle County first responders watch the flooding.

JUNCTION CITY — When it started raining Tuesday morning, one of the first calls 911 received was from a woman who was trapped in a car parked in her driveway on roOscar Johnson Road near White Oak Road.

When Boyle County emergency responders arrived, Rolling Fork Creek was rushing over the road and there was no way for them to get to her.

Mike Wilder, director of Danville-Boyle County Emergency Management who was there watching what he said looked like a raging river of chocolate milk, said thankfully, she was OK. She was able to back out and go up the road to higher ground and wait for the water to recede.

But people in a trailer right across the flooded area were seen standing on their porch, probably hoping the water wouldn’t rise any further — it looked like there was nowhere for them to go except hiking up the steep knob behind the home.

Flooding created similar situations around southern Boyle County and western Lincoln County Tuesday morning, as storms dumped inches of rain on an area that had already seen a lot of precipitation in recent days.

While responding in Junction City, another radio call reached Wilder, and he learned there was more flooding in the Forkland area. He traveled over Oscar Johnson Road to Ky. 37, heading toward the Forkland Community Center. There were several spots where the road was covered with water. Rock from driveways washed down and piled in the road, and fields looked like ponds.

Then, traffic came to a stop.

Ky. 37 was flooded between Sycamore Church of Christ and the Forkland Community Center.

Wilder said there was nothing they could do but wait. The vehicles on the other side of the flooded plain, several yards away, were stuck too.

While waiting to safely cross the water-covered road, emergency crewmen listened to their radios for other emergency calls. Without cell service, Wilder and other responders waited, hearing shortly of flooding in Hustonville, where several homes were submerged in water.

Nearby, Lorrie Westerfield was stranded as well. She wanted to check on a family member’s house and vehicles. She said she could see some friends across the flooded road who could tell her if there was any damage, but she had no cell phone service and couldn’t yell loud enough to reach them.

The creek was a wide river and sounded like the roar of a waterfall.

Tiny field mice and shews were seen swimming for their lives, and some crawled up onto the road for safety and to dry out. Even bugs, spiders and bunnies were seen trying to find dry land.

One of the people stranded on Ky. 37 said, “There’s nowhere for the water to go except downhill, and this is it.”

Later in the afternoon, Wilder said they eventually retreated back to a church’s parking lot.

He said the basement of the Forkland Community Center will need to be mopped out, as well as Boyle County Fire Department Station No. 6, which sits right next door to the center. The good news is that water didn’t damage any of the station’s equipment or trucks, Wilder said.

Wilder said the flooding was pretty much localized in the Forkland area. There wasn’t flooding in Danville or Perryville, nor was there any property damage he’d heard about.

“We don’t see this much water very often. This is as much as I’ve seen in a long time,” Wilder said.

The Parksville Water Department was also out during the flood Tuesday afternoon. They needed to find where a water main broke or was washed away, but flooding was prevented them from tracking it down.

Later in the afternoon, Jerry Feather, co-manager of the Parksville Water Department, said there were between 50 and 75 water customers without water because of the break. He said they have “a bunch” of water valves the crew needed to locate and turn off so they could determine where the problem was.

Once the valves can be located and turned off, then the water department can fix the main, but that can take some time, too. Since the ground is saturated and muddy, it will still be hard to find the break.

When asked how they were going to do it, Feather said, “Hope we get lucky!”

In Lincoln County, Emergency Management Director Don Gilliam said a state of emergency had been declared, which started Monday and would likely last through Wednesday. Calls about flooding problems began coming in before noon on Monday. By Tuesday, essentially the entire city of Hustonville in western Lincoln County had flooded, he said.

Emergency responders helped evacuate people stranded in at least four homes due to the flooding, Gilliam said. In the Moreland community, firefighters rescued two people from two different homes on Ky. 2141 Spur Road; people, a baby and some animals were rescued from a home on Mt. Salem Road, he said.

Gilliam said an estimated 12 to 15 homes and trailer homes had been damaged by flooding in the Hustonville area as of about 12 p.m. Tuesday.

Main highways in western Lincoln County were shut down due to flooding Tuesday, including Ky. 78, Ky. 1194 and Ky. 2141.

“It’s hard to get around over in the west end when it starts flooding,” Gilliam said, but fortunately, as of mid-day Tuesday, there had been no reports of anyone trying to drive a vehicle through standing water. That’s how people get in trouble most often during flooding, he said.

Captain Griffin Harness with the Hustonville Fire Department, said Tuesday’s rain started around 9 a.m. and by 10 a.m., a portion of the city along Hanging Fork Creek was under about 4 feet of water.

He said even the fire chief lost both of his vehicles when the flooding arrived.

Hustonville Baptist Church opened its doors to provide flood victims emergency shelter, food and water. It was also used as a standby location where emergency crews were stationed.

Harness said while they were there, they heard people screaming nearby and saw the flood waters quickly rising to nearby trailers.

“We acknowledged we were they to help them,” Harness said.

He said they helped rescue four adults and two infants, all in the same family.

Hustonville Mayor David Peyton, who is also a member of the fire department, said he was proud of the responses from his department, and for the Brush Creek department from Casey County, the Junction City Fire Department, Lincoln County fire stations No. 3 and No. 4, the Lincoln County Sheriff’s Office and the Lincoln County Regional Jail, which brought in prisoners to help clear debris from the flooded roads in town.

Peyton said the emergency crews were “100-percent professionals. That’s what we train for.”

After the morning rains eased up and the flood waters receded in Hustonville, David Couch was driving around on a golf cart looking at the damage to homes. He said his brother’s family lost everything.

“Main thing is no one got hurt. You can replace trailers and homes. You can’t replace lives,” he said.

Flooding impacted a crude oil well in Lincoln County, which began overflowing into the Green River along Ky. 698, Gilliam said. A hazmat team was sent to manage the situation, but poor cell and radio service in the area meant they were largely out-of-contact with the Lincoln County Emergency Operations Center while at the scene, Gilliam said.

Some roads closed, reopened as water levels dropped, then re-closed later Tuesday after a second period of heavy rain, Gilliam said. Besides the main highways that were made impassable, countless side roads were also flooded, and numerous bridges and culverts were damaged or washed away.

“We quit putting out road names (because) we just got so many,” he said.

Parts of Lincoln County, including Gilliam’s home, got at least 5 inches of rain even before Tuesday’s storms began dumping additional inches. Gilliam said the National Weather Service had estimated rain could fall at up to 1.5 to 2 inches per hour at times on Tuesday.

“2 inches per hour gives us problems,” he said.

Gilliam said declaring a state of emergency in Lincoln County “gives us the opportunity to receive a national declaration (of emergency), which would bring FEMA into the picture” and open up the possibility that local property owners could receive financial assistance for damage caused by the flooding.

But getting FEMA involved is “not a given,” he said: National declarations are usually reserved for disasters with a more widespread effect.

Gilliam said at the peak of the flooding, there were probably about 15 firefighters and four law enforcement officers handling emergency calls in the Hustonville area and western Lincoln County.

After the water recedes, there will be more work to do.

“Travel, commerce — it’s all impacted and will be impacted probably for a couple days,” he said. “We’ll have to inspect bridges, culverts, that kind of thing.”

The log cabin at the Forkland Community Center is flooded.

From left, Jake Smith, Beth Robbins and Ron Crutchfield carefully walk on Ky. 37 to see if the road is passable as a truck follows them.

Bubbles churning up in the flooded Hanging Fork Creek are caused by water coming up from under the road. Mike Wilder said this could be a sign that the road could wash out.

A tiny field mouse or shew climbs out of the water and heads toward safety of a Boyle County Fire Department boat trailer.

A tiny shew swims for his life.

The Hanging Fork Creek closes off parts of Ky. 37.

The Hanging Fork Creek closes off parts of Ky. 37.