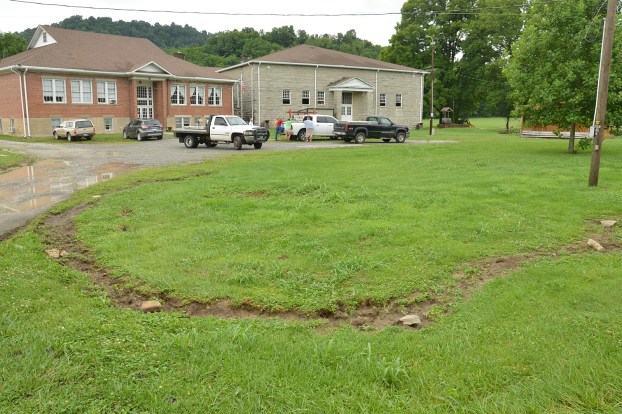 A few Forkland Community Center supporters discuss what to do next to get the center up and running. Not only was the basement flooded, the entire split rail fencing surrounding the property washed away in the flood. (Photo by Robin Hart)

FORKLAND — The flooding that swelled inside of the Forkland Community Center and Boyle County Fire Company 6 may have lasted only a few hours, but the cleanup could take several days or even weeks.

Wednesday afternoon, vice president of the Forkland Community Center Doris Purdom answered the center’s phone in a cheerful voice but had disheartening news about the center’s losses. 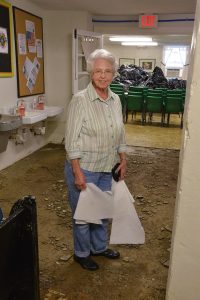 Doris Purdom is still smiling while standing in the debris of the Forkland Center’s basement after the flood waters receded. She said the hallway where she was standing had been carpeted and the pile of trash bags in the background are items to be thrown away. (Photo by Robin Hart)

She said the Rolling Fork rose about 3 feet into the center’s basement — some places a little more and some a little less.

Because of this, Purdom said, everything in the basement was ruined by mud and water. That includes the kitchen’s five stoves and 15 to 20 deep freezes and refrigerators.

“It’s a major, major loss,” Purdom said. “Everything is covered in mud and is destroyed.”

Other losses include all of the supplies, tables, chairs and artwork in the two craft and art rooms, the dining room, the bathrooms, all of the kitchen linens and a large stock of vinyl tablecloths.

Purdom said thankfully the center had flood insurance and a cleaning company was already clearing out the mud on Wednesday.

However, late Wednesday afternoon Forkland Community Center President Matthew Ellis said he had just talked with the FEMA flood insurance company and the representative said not much will be covered — only a hot water heater and a small portion of the mud cleanup.

“I just found out we have flood insurance that doesn’t cover floods… which we are mandatory to have,” Ellis said. He was told their insurance only covers flooding that occurs beginning at 2 inches below the grade of the building. The center’s basement and all of its contents and repairs will not be covered, he said. 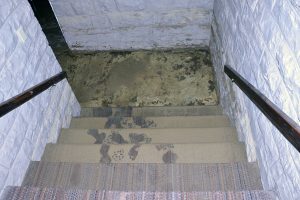 Looking down the stairs into the basement, workers’ foot prints can be seen in mud left on the carpet. (Photo by Robin Hart)

After the paid cleaning crew is finished shoveling out mud, drying out the basement and disposing of the ruined furniture, supplies and equipment today (Thursday), the community center will need volunteers to help to finish the job.

“A lot of work will be going on in the kitchen,” she said. “We appreciate anything, whether its work, donations or supplies — whatever we can get.”

Right next door on Wednesday afternoon, Boyle County Fire Department Company 7 was also dealing with the aftermath of Tuesday’s flooding.

Tim Middleton, information officer for the Boyle County Fire Department, said station6  had about 18 to 24 inches of sediment and water inside Tuesday afternoon. But volunteer firefighters “worked in it up until the wee hours” of Wednesday, shoveling out water and mud so that the station would be fully functional if they were needed to respond to an emergency, Middleton said.

Since it’s strictly a volunteer fire department, Middleton said members will work on their time off and in the evenings to get everything back to normal. “We will do what we can.” But they will hire professionals to do other repair work like replacing the drywall.

As soon as possible they’ll empty out their headquarters and wash and dry out everything to prevent mold from spreading.

Volunteer firefighters from several departments in the Boyle County have also come to help with the cleanup efforts, Middleton said.

He said it just so happened that an insurance adjuster was on his way to inspect the building for previous water and moisture damage when the flood hit the area. When he arrived after the water receded, “It gave him a little extra to look at,” Middleton said.

Magistrates with the Boyle County Fiscal Court recently checked out first-hand what they’d heard were issues with vehicles speeding through... read more