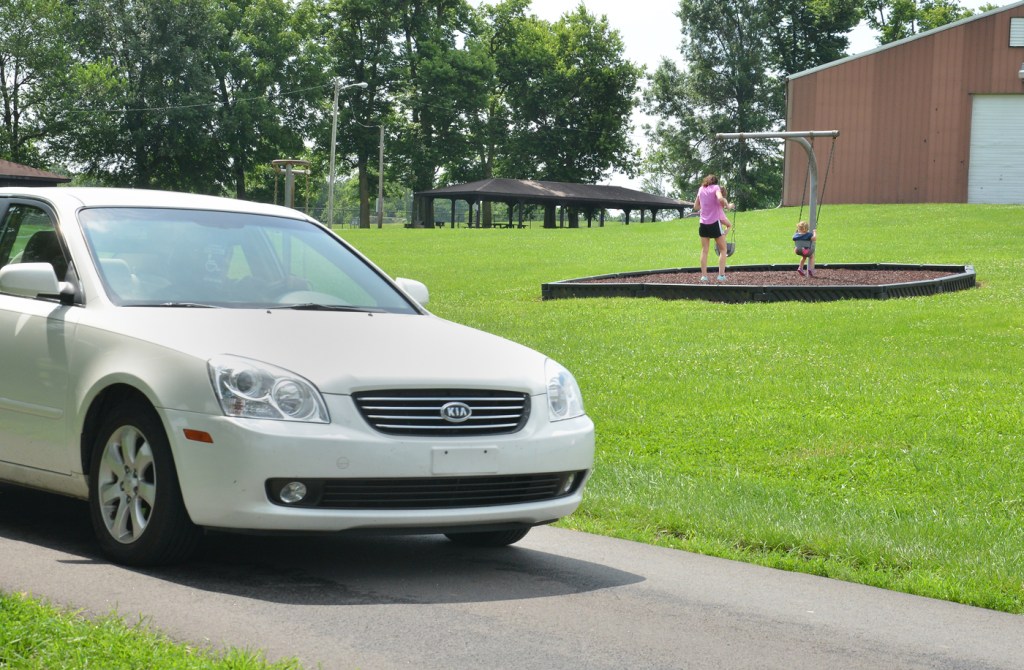 A vehicle drives down the road by Whites Park Wednesday, while an adult and child play on nearby playground equipment. (Photo by Robin Hart)

Magistrates with the Boyle County Fiscal Court recently checked out first-hand what they’d heard were issues with vehicles speeding through Whites Park, and are now saying the road should be closed due to safety.

“This isn’t something that just came up today,” Magistrate Jack Hendricks said. On Tuesday, he brought the topic back to fiscal court of speeding cars flying through the area — which is entered off of the bypass near the Boyle County Fairgrounds. The road, which isn’t meant to be a through road, connects to the very back of Millennium Park and is used as a short-cut by many.

Hendricks told the court he and Magistrate Phil Sammons met with Boyle County Engineer Duane Campbell at the site in question.

“We were out there for about 15 minutes one day, and I know at least 20 cars came through there,” Hendricks said. Some, he said, he knows were doing 40-50 miles an hour, flying over speedbumps constructed on the road.

“Those speedbumps are significant, too,” Hendricks said. “I go over them at five miles per hour and it jars me. But there’s only two speedbumps when you get towards Millennium Park, and there’s too much distance in between them.”

The main issue for Hendricks and Sammons is the playground in White’s Park, which is near the big brown building at the fairgrounds used as floral hall during fair season and for other events.

There are posts put up in the area around some of the speedbumps, Hendricks said, to prevent people from driving around the bumps and into the grass.

“That’s really dangerous. Kids play up there every day, and if one ran out from behind a parked car, into the path of an oncoming one going that fast …” Hendricks told the court.

Hendricks and Sammons say for years, they have observed people using the road to get to the main Boyle County Schools campus, including students, parents and now construction workers, who are working on the new middle school.

Hendricks said Campbell gave them some ideas of how to handle the situation, including extending the posts out by about 150-200 feet to stop drivers from going into the grass. They also plan to place “No thru traffic” signs on the road, along with a couple more speedbumps.

“And the major suggestion would be to close the gates connecting Millennium (Park) and Whites Park. I know some folks are upset about it and don’t want it closed,” Hendricks said. “We’ll have to give some keys out to some (public works employees) and some Millennium folks, I’m sure.”

During a phone interview, Campbell said although locking the gate will prevent most of the thru-traffic, they will monitor the situation after. He said there will still be kids and adults who come into the park and the road through Whites Park is the closest way for them to access the track and soccer field.

“We still have that to consider and be concerned with,” he said. “There will still be a fair amount of traffic that enters through there. Probably feel like we’ll still need to put up the posts and (add) speedbumps after, for the safety of the playground.”

He said signs have been ordered and will be posted as soon as they are received.

“It’s been a concern of ours for a while now,” Campbell said.

During Tuesday’s meeting, Hendricks said thru-traffic is not what the road was designed for; it was meant for internal access to the park only.

After the meeting, Hendricks said not only he and Sammons, but all of the magistrates on the court have received calls complaining about the speeding issue.

“People have been trying to get us to close that gate for the last three years, including the fair board and a lot of other people.”

“These are all good suggestions,” Boyle County Judge-Executive Harold McKinney said Tuesday. “Do I hate to see the gates closed? Yes, I do. I hate to do it. But it needs to be done.”

“I’ve asked for better answers to improve the safety for our children over there, but have yet to have anyone coming forward,” Hendricks said. “I go through there all of the time. It’s a three-minute difference to go around to the actual Millennium Park entrance.”

The court maintained its plans for a $7.5 million bond issuance to repair, renovate or replace the Boyle County Jail. The final plans for the jail will be decided on after the results of a comprehensive jail study is released later this year.

Last year’s budget was about $21.18 million; county treasurer Mary Conley previously said the budget growth is mostly due to the addition of the bonds. The $7.5 million figure was chosen because Boyle County could take on that amount of debt without raising taxes, and the debt service would be comparable to what the county pays now on the current detention center — around $400,000 annually.

Although first discussed to be cut, Main Street Perryville was funded its full amount requested of $39,215, the same ammount appropriated last year.