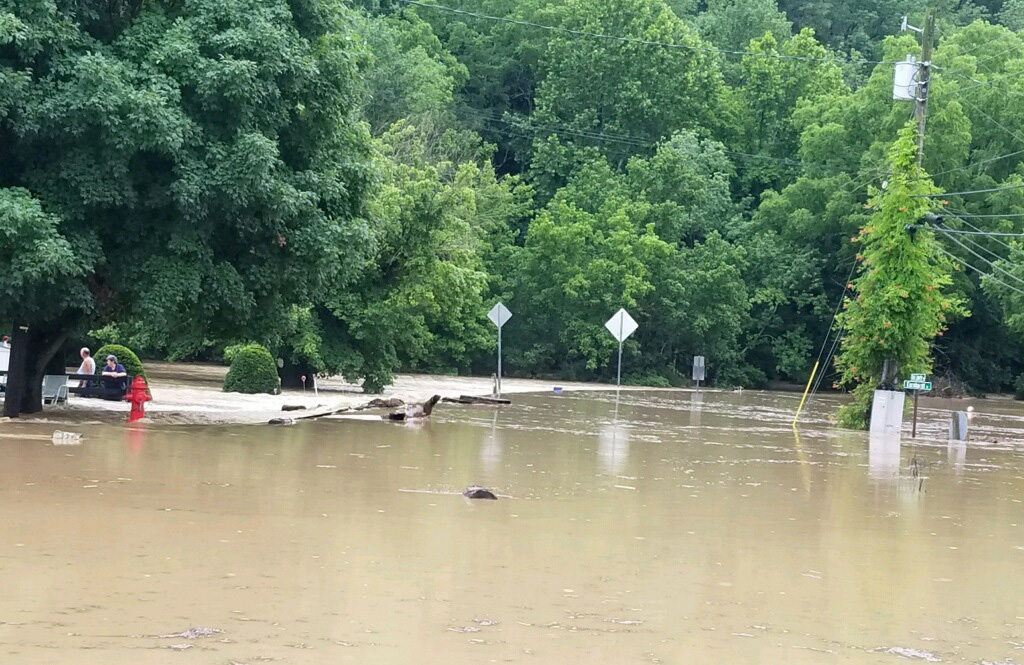 HUSTONVILLE — Residents in west Lincoln County were cleaning up and assessing the damage Wednesday after heavy rains caused Hanging Fork Creek to flood on Tuesday.

The flooding didn’t cause any reported injuries, but numerous properties and roadways were damaged in the flooding.

Hustonville Mayor David Peyton said an estimated six mobile homes had water inside of them during the flooding. But “nobody got injured, so we’ll deal with the property damage and get things back together,” he said. “It will probably take a couple weeks for us to get everything cleaned up.”

Peyton said the city park was hit the hardest — a fence around the tennis courts caught “all kinds of debris” and then was torn down by the flooding.

Tuesday night, firefighters had to rescue five people from two cars that drove into standing water on Fox Spoonamore Lane. Lincoln County Emergency Management Director Don Gilliam said the road was one of many that had been affected by flooding and was closed, “but they tried to go through it anyway and bogged down.”

A woman and two children from one vehicle and an older couple in a second vehicle were all brought to safety by Lincoln County firefighters and local law enforcement, Gilliam said.

Mayor Peyton said Hustonville Fire Chief Jimmy Lane was on vacation and wasn’t around to move his vehicles. Others were able to move Lane’s pickup truck out of harm’s way, but couldn’t get a second vehicle moved in time.

“It got all the way up to the sideview mirrors on it,” he said. “I would say it’s a total loss.”

Gilliam said a crude oil well damaged along Ky. 698 in the flooding may have leaked about one barrel of crude oil into the Green River.

The pump may have pumping “at the rate of about three barrels a day” when the supply line disconnected, causing the oil to begin flowing into the nearby Green River, he said.

A hazmat crew got to the scene, shut down the pump and capped the line. Gilliam said the amount of oil wasn’t enough to create a problem given the volume of water involved.

Wednesday brought more rain to the area, but there were no new reports of flooding coming in, Gilliam said.

The Hanging Fork Creek continued to roar but stayed within its banks as Gilliam and representatives for the Red Cross were in Hustonville conducting damage assessments.

A total cost estimate for the disaster was not available yet Wednesday, Gilliam said.

Mayor Peyton said anyone in Hustonville who needs help with debris cleanup can call city hall.

“We’re not just going to clean up along the right-of-way; we’re going to assist any resident that needs help,” he said. “We’re a very small town; we do things differently than the big cities do. … We’re pretty self-sufficient. I think we can take care of this on our own.”