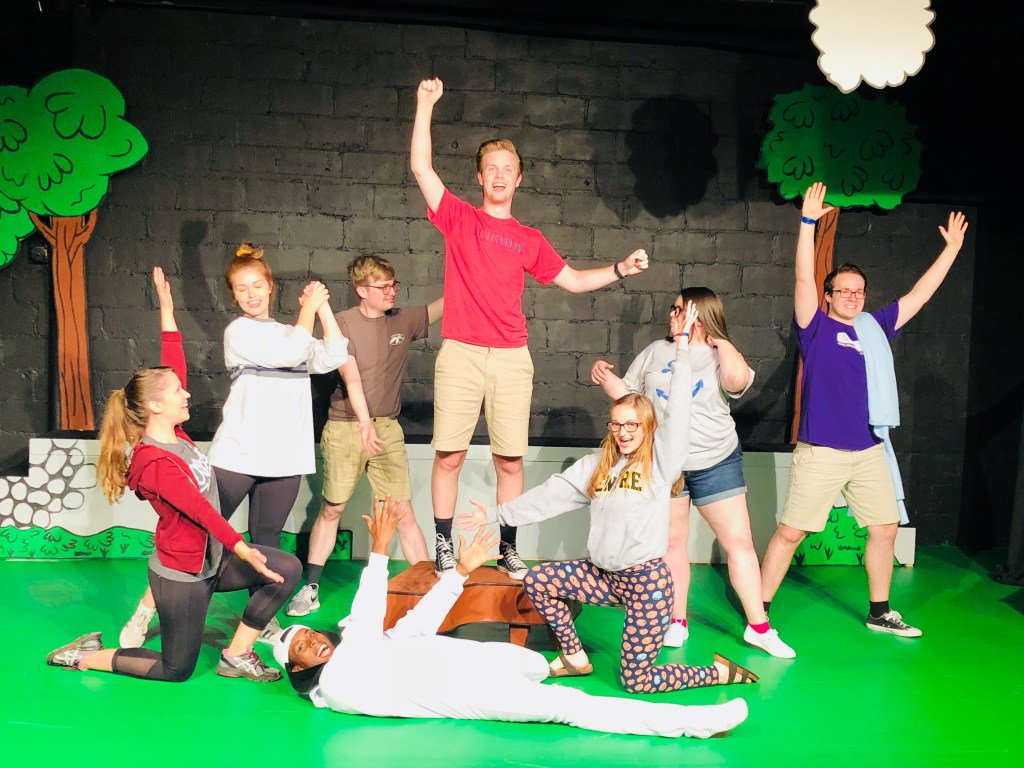 Actors rehearse the opening number in "Your a Good Man, Charlie Brown," with some of the characters heading to school.

Director Beth Marlowe says although comic strips are generally seen as something for kids, when one comes to life, it’s for everyone.

“You’re a Good Man, Charlie Brown” will hit the stage at West T. Hill Community Theatre soon, a show Marlowe says may appeal even more to adults than kids.

“OK, maybe not ‘more’ for adults, but equally for both. Adults will probably be more familiar with these characters than kids,” she says, because so many of us grew up with the Peanuts Gang. But she says “kids will relate to them too, even if they’ve never seen the gang — kids are kids, and the things they deal with are timeless.” 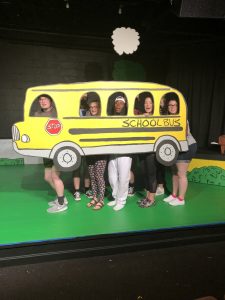 Actors rehearse the opening number in “Your a Good Man, Charlie Brown,” with some of the characters heading to school.

Marlowe says the piece was chosen because it plays so well on stage. Such a sweet, heartwarming show, she says, that reminds so many of us about our childhood. “Our small theater just seemed like it would be a good fit for it.”

To top of the sweet sentiments within the story, Marlowe boasts that this show, by far, is the best cast vocally she’s ever worked with in a while.

“The music in this show is pretty difficult and that was my biggest worry,” she says. “I just didn’t think we’d have the vocal talent to fully do it justice,” but she was very wrong, she says. “We have some great voices in this show.”

Director Marlowe says all of the cast members are standouts in their own way.

“I’ve seen this show numerous times but our Snoopy is pretty fantastic,” she says. Snoopy, played by Michael Ross, “ranks up there as one of the best from the productions I’ve seen. He is incredibly funny.”

A newcomer to the WTH stage is Janelle Whitaker, who plays Sally. “I’ve never worked with her before, and she’s hysterical and such a natural.”

Hannah Daugherty, who plays Lucy, is back on the WTH stage after a long hiatus. Marlowe says Daugherty has been doing theatre other places but happened to be back in the area this summer. “I have been so super-excited to have a chance to work with her.”

Rounding out the cast is Ethan Baker as Schroeder, who Marlowe says is “absolutely perfect for this role.” Lucas Ross, she says, is lovable Linus; and Dylan Godbey plays Charlie Brown. 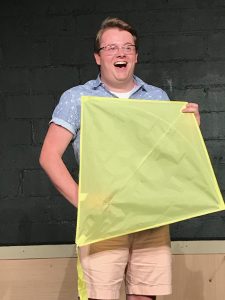 Down on his luck Charlie Brown (Dylan Godbey) tries to get his kite to fly.

“Dylan is currently a vocal performance major at Belmont in Nashville. I’m so excited to have him at the helm,” Marlowe says, adding that Godbey is also helping with the music. “I said I was going to use him as my music director but everyone in the cast is so talented, they are all sort of helping themselves and each other, and it’s amazing to watch.”

Marlowe also has four singers in a chorus: Maggie Jenkins, Jonah Cline, Cierra Wrenn and Becky Mohr. They are on stage in group numbers but also serve as the backstage crew, moving pieces and parts around the stage.

Anita Baskin is Marlowe’s stage manager. “I know every show I do with her is going to be elevated to the next level than if I had done it without her … it’s hard to do a show without her now. She’s one of my best friends, so that makes it more enjoyable too.”

David Mullins built the set for the production, and Natalie Grubbs did the majority of the painting.

“The painting has to be spot on in this show and Natalie is doing a great job — she is going to be a senior at Danville High School next year but is such a gifted artist.”

The show itself has numerous little storylines involved, just as if you were reading the cartoon strip, Marlowe says. “It’s basically a peak inside the life of down-on-his-luck Charlie Brown. We see him longing to talk to the little red-headed girl, Lucy playing tricks on him, everyone around him being sent Valentines and him getting none — it’s just small little stories that we can all relate to. It’s a cute, fun, heartwarming show.”

And again, Marlowe reminds: This is not just a kids’ show. This show has played on Broadway with huge-name stars, she says. 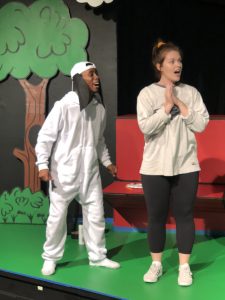 Michael Ross (as Snoopy) and Hannah Daughtery (as Lucy)

“The last song ‘Happiness’ is beautiful. I hope every audience member leaves smiling, being reminded that there is such joy around us, we just may have to look for it to find it,” she says. “I hope people are singing, laughing and sharing memories. I hope children leave inspired to check out the awesome characters and go look online at some of the classic ‘Peanuts’ cartoons that are amazing and should be seen by this next generation.”