The art of learning

Several local teachers and many from around the state took part in the Arts Academy at Danville High School this week and learned how to assess their students’ creative work by being creative themselves. 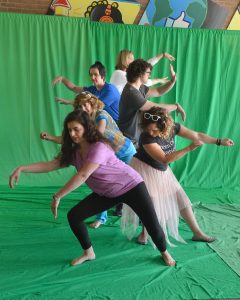 The Kentucky Department of Education funded the academy and partnered with the Kentucky Center for the Performing Arts to develop the program. Each day, the 37 teachers focused on a particular art form — theater, music, dance, visual art and media art — which were led by master teachers.

In the afternoons, the group held constructive discussions about what they learned that morning; the terminology used in each specific art form; and how that form could be integrated into the general education classes, as well as their arts classes.

In addition, teachers discussed student artwork from various grade levels and how to access or grade their projects not just based on the focus of their effort, ability to follow directions or the final piece of art, but to also incorporate how the students were able to explain their created art.

Jane Dewey, director of arts education for Danville Schools and coordinator for the Arts Academy, said many of the art teachers in Kentucky are being asked to teach not only in the area of their expertise, but all art forms as well. For example, a visual art teacher sometimes has to teach music and drama, or a choir teacher has to teach dance.

Dewey said educators have to be able to assess the artistic development of students, even though they may not have a strong background in that particular area.

Rebecca Stephenson, who teaches contemporary dance at The Kentucky Center for the Performing Arts, said teachers in performing art and visual art also have to teach at multiple grade levels and collaborate with other teachers. 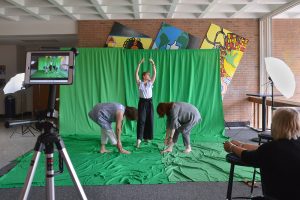 “As artists we have to know a little bit of everything,” Stephenson said. “We need to understand each other as art teachers.”

During the Arts Academy, Stephenson said she was learning how to better collaborate with other teachers, which is crucial in producing a stage production.

She works with the orchestra teachers for music and visual arts teachers on stage sets.

“I learned a whole new range of skills I didn’t even know about.”

Rebecca Case, who was the master dance instructor for the Arts Academy and works in the Ashland school system, said she is learning to incorporate dance with academics whenever she can. For example, if a social studies teacher is helping students learn about Native Americans, she can teach the kids a Native American dance to help round out their learning experience.

“I think this is the way the arts can survive in education,” Stephenson said. “Unfortunately, there’s not a lot of arts for arts sake. Collaboration and integration is the biggest way we can see improvements in the arts.”

Jeff Jamner, senior director of education and community arts at the Kentucky Center for the Performing Arts, said the center has been working with the Kentucky Department of Education since 2000 “to provide active and artist-led professional development for teachers in the arts and arts integration.”

In addition to the Danville camp, the center held an academy in Murray involving arts, Spanish and cultural studies. And it will hold another academy in Louisville “that addresses the arts and student wellness,” Jamner said.

Dewey said it’s nice to have “this opportunity close to home.” 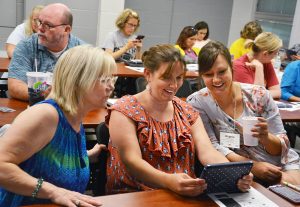 “We’re honored to have teachers from around the state attend,” she said, adding that it’s “a wonderful way for teachers to build a network of colleagues both during the week and as an on-going network throughout the school year.”

Jamner said the teachers were also learning a critical response method called PAL (Praise, Ask questions, Listen to opinions) where they ask neutral questions about a student’s art piece and give feedback in a non-threatening and productive way in order to help their students develop artistically.

Teachers will also be showing this process to their students to will help them to communicate better, which is something this society needs more of, Dewey said.

On Friday, teachers collaborated with each other in groups to produce short videos about what they had studied.

Several green screens were used as backgrounds for the teachers, who performed simple choreographed movements to music, sounds and their own dramatic voices while one or more of their paintings were imposed on the recorded performance.

Dewey said at the end of each daily discussion, teachers seemed to agree that one of the most important things they were leaning “wasn’t about specific art form, but how to work collaboratively, how to have patience with yourself and with each other, how to open up yourself to learning different ways of interpretation, and empathize with the feelings so we can communicate.” Stephenson agreed. “Even if you’re n ot particularly gifted in an arts area, (art) still helps you connect to humanity and culture.”

In Focus: Sales tax expansion will hit charities, too