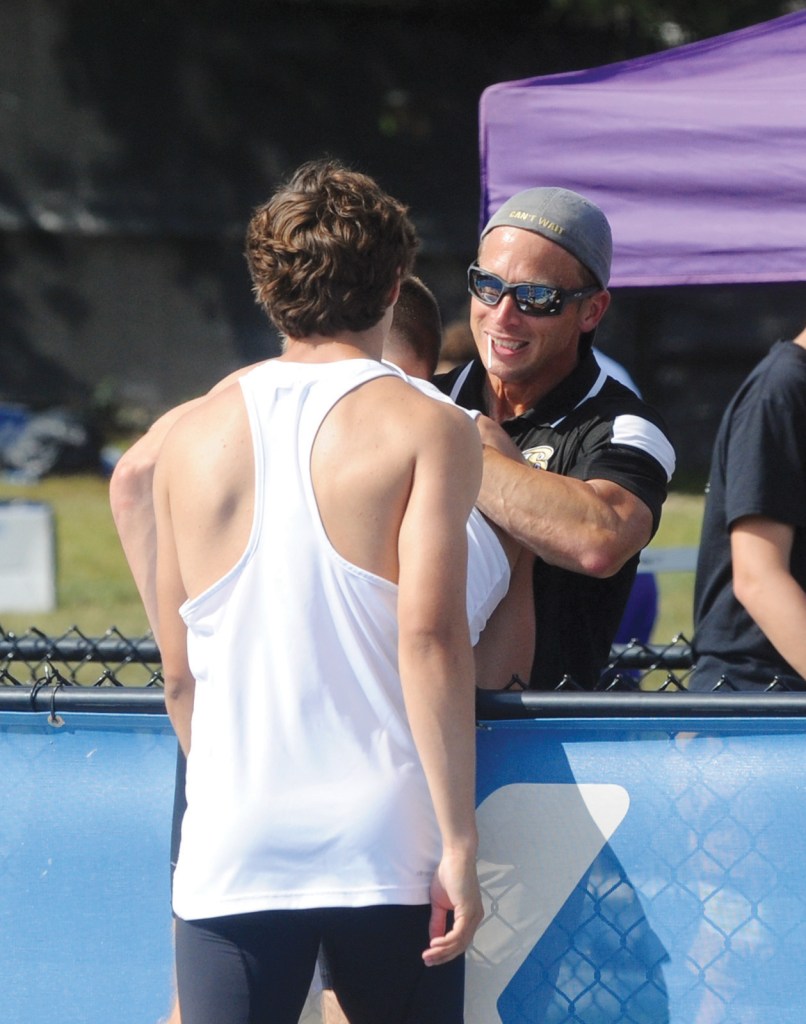 Spend a minute with Brent Wagner and you’ll know just what kind of coach you’re dealing with.

Boyle County’s head track and field coach doesn’t have an off switch. His assistants say “he’s like the Energizer Bunny,” he never takes a moment off.

Wagner has built a track and field powerhouse in central Kentucky, winning three-straight girls state championships and the program’s first ever boys state title. He’s a recipient of the Bill Vaught Memorial Coach of the Year award for his dedication to his program’s success.

“The guy doesn’t even sleep. He’s so committed and dedicated to the athletes that he coaches,” assistant coach Seth Tamme said. “He’s relentless, he never stops. It’s kind of amazing, really. He doesn’t eat, he doesn’t sleep, he just makes sure that the kids that he coaches are in the best possible position to win.”

Wagner has unquestionable pride for his program — he was a runner at Boyle County and helped raise funds for the program by cleaning football bleachers during his time at the school.

He’s still got that same work ethic as a head coach. He’s in the hallways at Boyle County High School recruiting athletes for the team.

“His strongest attributes would be being able to motivate, recruiting the kids and getting them excited about the program,” assistant coach Donna Anderson said. “He’s passionate about track and field and it shows, the kids pick up on that and it’s infectious. The culture is one of high motivation and challenging kids to be themselves, not just for themselves but for the collective good of the team. He’s worked at so many different individual aspects of track and field.”

Wagner has built a strong coaching staff — Tamme’s specialty is sprinting, Anderson distance, Damian Laymon is in charge of vaulters, Krista Rinehart handles hurdles and handoffs, Billy Moore is on the throws and Tabitha Evans takes care of jumps.

“In terms of our coaching staff, one of the things I like is that Wagner doesn’t claim to know everything about everything,” Laymon said. “Nobody does. He lets us do our own thing and he expects us to take care of our athletes, to be responsible for them, to know how to treat them. He allows us to do that. That means a lot to me. I personally think there’s a measure of competition between coaches because we all want our athletes to be at the top. I don’t think he does that intentionally, that’s just what happens when you allow your coaches to take their athletes.”

Wagner’s competitiveness is infectious. It starts with him, the assistant coaches compete with one another each night on the track and the athletes eat up the competition as well.

“It’s competitive as it can be, and he’s the ringleader,” Tamme said. “We set the bar so high, we all do, and it starts at the top. He sets the expectations, and when you set the bar that high, of course the assistant coaches, you don’t want to be the one to let the team down. When you have the quality kids that we have, they’re super competitive and it creates a winning atmosphere. And it starts at the top. He’s obsessed with developing and being the best version of ourselves.”

Becoming the best version isn’t just for his athletes, either. Wagner has always been looking for ways to improve as a coach.

“He’s a great guy, he’s a friend and overall just an excellent coach,” Laymon said. “He’s constantly trying to figure out what he can do better, he’s open to feedback from us and his athletes. He’s got a good relationship with everybody. I think that really means a lot. He’s the reason why we’ve been as successful as we have over the past several years, he leads by example. He expects energy and hard work out of everybody.”

“He listens, he’s willing to listen to what anyone has to say,” she said. “How motivational he is, I think that’s his nature. That’s his style. Building on that has grown the program. There’s a theme of the year, pre-state motivational talks at dusk. He does the little things to get the kids hyped about it. It’s hard to be creative like that, I’ll give him credit for that. That’s not easy.”

Evans has a unique perspective on Wagner – she was an athlete for Wagner’s teams and now she’s an assistant coach.

“When we’re winning and performing where we need to be, he knows how to push the kids to continue to work their best for the end goal and for each other,” Evans said. “He really knows how to get the kids to buy in and see that they’re working for more than just a medal at a Saturday meet or a name on a record board, but that they’re working to continue to build the track program … He sees the potential in his kids and is very good at putting them in a position to be able to see that potential in themselves as well.”

So where would Boyle County track and field be without Wagner?

“Without coach Wagner, it would be back where it was in the 1990s,” Moore said. “It wouldn’t be anywhere near where it is today. He’s the gamemaker in the whole thing. I’ve coached at two other teams and the family atmosphere at Boyle County is nothing like I’ve ever been a part of.”

Tamme echoed Moore’s statement and said Wagner has done an incredible job motivating other athletes to join the track team. Wagner has built the track and field program into a destination for the top athletes in the Boyle County school system instead of something students can do to stay in shape.

“We’d be in the middle of the region, and I mean that 100 percent,” Tamme said. “Brent Wagner is the reason that we’re all here. He’s the one in the hallways recruiting kids to come out and run, kids who hate running. He’s sending them letters, he’s making it feel like a family. They’re competing with each other rather than just running out there.”

Wagner trusts his assistant coaches to make decisions. Laymon said he’s “grown into the role of being a championship coach.”

He’s built his program into developing athletes and better individuals, cultivated relationships between athletes and coaches and has gained respect across the state.

“He’s not worried about winning a state championship, although that’s the goal, he just says get out there and destroy your body so that you can get stronger and let’s see what happens,” Laymon said. “I’ve got great respect for him, he doesn’t have an off switch. As the season wears on, as the end of May rolls around, it’s easy to start getting tired. But he doesn’t quit. And everyone feeds off of that.”