From The House: ‘Drinking Habits 2’ is a sequel of silliness 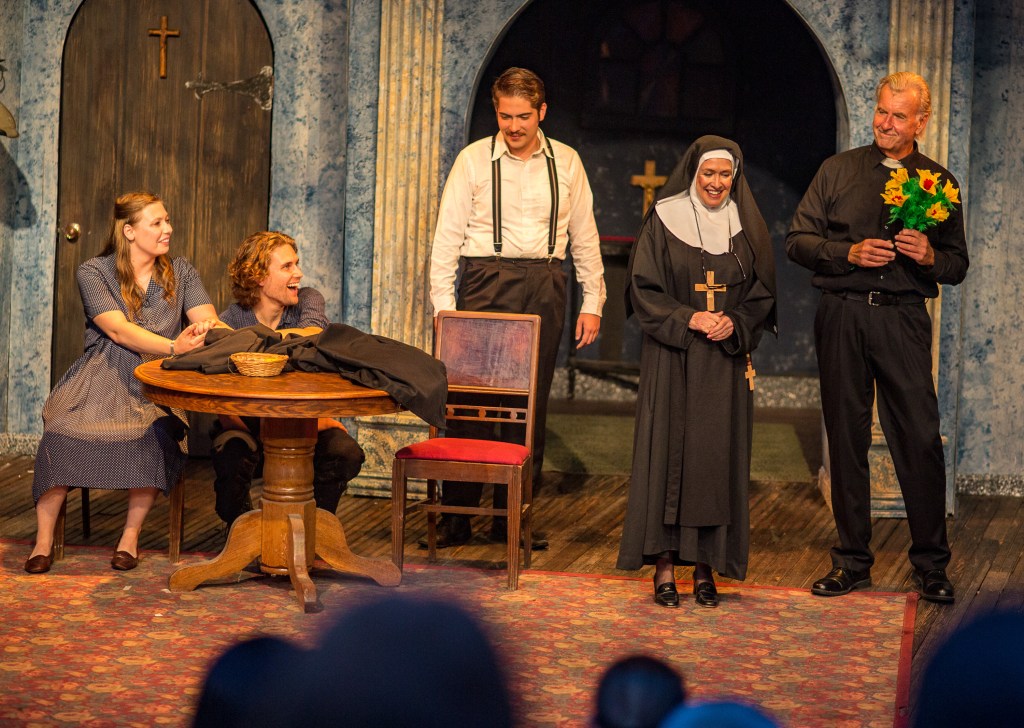 Regular visitors to Danville’s outdoor theater will understand what I mean when I say its second show of the year, “Drinking Habits 2: Caught in the Act,” is a classic Playhouse play.

“Drinking Habits” has most of the elements you’ve probably seen at Pioneer Playhouse before: a little bit of slapstick, characters in disguise, closet shenanigans, hypnosis, breaking the fourth wall and, of course, a grand finale where all the storylines come crashing into each other for a climax of chaotic hilarity.

“Drinking Habits” is perhaps even a notch above the norm in this last regard, because the reveal — the big moment the audience waits for all show — lasts for most of the second act. 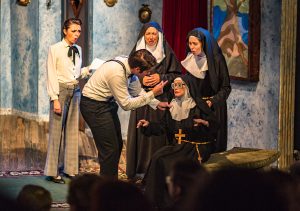 To enjoy “Drinking Habits 2,” it is helpful to have seen the original “Drinking Habits,” which the Playhouse put on last year. But it’s not a requirement, especially if you have a primer on the cast.

The play is set in the 1930s, inside the Convent of the Sisters of Perpetual Sewing. Sisters Philomena (Fannie Lemasters) and Augusta (Kathleen Parker Thompson) are a pair of nuns who, in the first “Drinking Habits,” secretly fermented grapes grown on the convent grounds to make wine. The leader of the nuns is Mother Superior (Patricia Hammond) and the convent’s priest is Father Chenille (Eben French Mastin).

Mother Superior and Father Chenille were actually an item way back before either of them entered their current chaste careers. The couple had twins — Paul (Giancarlo Herrera) and Kate (Andi Johnson), who grew up in an orphanage and are now adults very much involved in life at the convent.

Kate married George (Forrest Loeffler), a helper at the convent. Paul was going to marry Sally (Katherine Rose Reardon), a reporter whose undercover investigating in the original “Drinking Habits” caused the four family members to be reunified. But Sally left Paul at the altar.

When “Drinking Habits 2” picks the story back up, Philomena and Augusta have given up their wine-making — though you can probably guess how long that lasts.

The playwright, Tom Smith, worked plenty of sharp-witted one-liners into the play. The cast is quite good at delivering them in a way that catches the audience off-guard, which pays off nicely — unexpected jokes always make for bigger laughs. 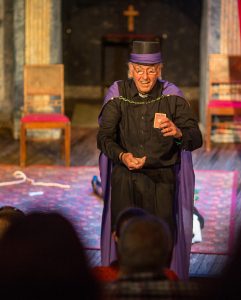 Every comedic play has a sweet spot — the funniest scene that everything else in the play helps set up. The sweet spot is what everyone talks about as they drive home afterward. Despite being a relatively short play, “Drinking Habits 2” features an exceptionally large sweet spot, when all the characters put on a play within the play during the second act. You’ll be laughing non-stop for quite a while.

Laughs are really what the play is all about, so don’t attend expecting a moral of the story, dramatic depth or complex emotions. Just sit back, relax and get a little silly.

“Drinking Habits 2: Caught in the Act” will run through July 7, Tuesdays through Saturdays at 8:30 p.m. A dinner is served at 7:30 p.m. Reservations are recommended for the show and required for dinner. Dinner and the show is $32; the show only is $18.