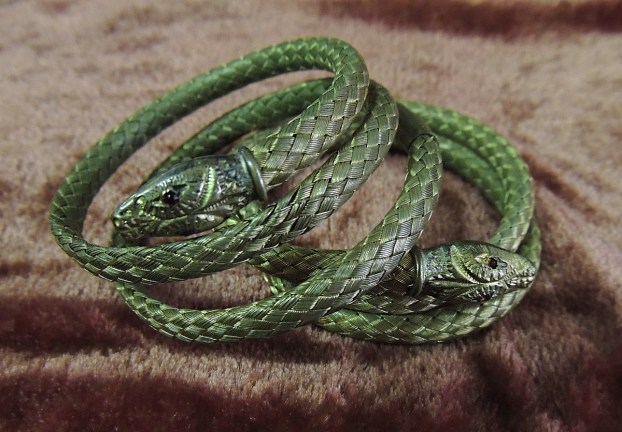 Question: Jerry, What can you tell me about my snake bracelets? They belonged to my great-grandmother, Nancy Mae Marrs who was born in 1873. They have a great story about them.

Nancy’s family had taken seriously ill in Campbellsville. As a toddler, of about two years old, Nancy was taken in and raised by Mr. and Mrs. Moses Davis Elmore of Stanford. Moses owned a successful general store in Stanford.

She was doted on and adored and had a much better life and education than she would have had, had that illness not struck her family.

Are snakes unusual in jewelry of this period? Can I clean them? Thanks for taking the time to look at this.

Answer: I agree, that is a great story and not terribly unusual for the times. Child rearing and the family dynamic was remarkably different from today.

Yes, snakes have been used for thousands of years. All the way back to the Egyptians, the Aztecs and even earlier cultures, have held high regards for the snake and its use in ornaments and talismans.

Its symbolism is deep and interesting. Nearly every religion recognizes the snake as a powerful totem. Today, many see snakes as slithery, evil and to be feared. But thousands and tens of thousands of years ago, they were viewed as symbols for fertility, sex, rebirth, protection, poison and vengefulness.

And then comes the Victorians. Victorian folks were amazed at the symbols of earlier cultures and used them often and quite successfully too. They used snakes on jewelry, used them in pottery and glass and forged and cast them in metals.

Judging by the style and the construction I’d date them to the 1870s. These might have had a few years of age on them when they were gifted to your great grandmother.

Likely, they had a fine leather presentation box that accompanied them. Still they were lovely and expensive gifts. In lookingat the photos, they are gold filled or rolled gold, with likely, glass set “ruby”eyes.

I can see some of the brass base metal peeking through in spots. You might gently polish them with a soft cloth to pull up some shine. But don’t do anything too gloopy or wet as there is a coiled metal band inside that body that will rust if too wet. And polish gummed up in that woven wire will be a nightmare to clean out. Just stick to a soft cloth or your own fingers to brighten them up.

It’s a huge plus that you have a matched pair! I’d wager that with the fine work and details and their history, this set of bracelets, at a nice antique jewelry show would sell for about $175 retail. Thanks for sharing them and for the great story.

100 YEARS AGO — 1918 The patriotic citizens of Lincoln County have organized a Liberty Service League and give warning... read more