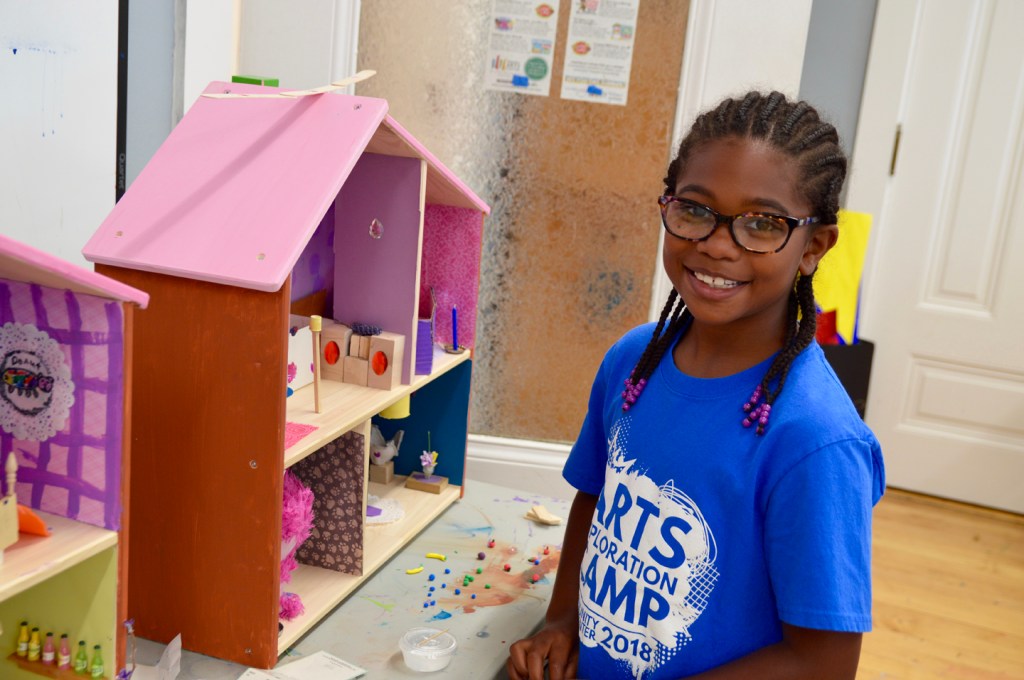 “This is a different type of creative experience, but it’s one where the kids can really settle in and focus deeply,” said Kate Snyder.

Snyder is the Director of Marketing and Development at the Community Arts Center. She helped organize Dollhouse Camp, which concluded on Friday.

This is the first year that Dollhouse Camp has been offered by the Community Arts Center. Snyder reports that the event was a massive success and sold out immediately. She added that the camp was in such high demand, it will be offered again in August. 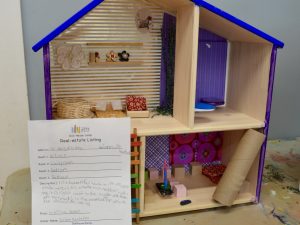 (Casey Cragier photo) Jailynn Patterson’s four bedroom home on 170 Unicorn Avenue, Unicornsville, Kentucky is on the market for 10 billion dollars. The home features both a paper towel roll slide for easy transition between the first and second floors, as well as a rainbow ladder.

When 20 campers first arrived on June 25, they were met with completely blank dollhouses. The structures were assembled beforehand, but the inside and outside were completely void of paint, decor and furniture.

“They have done everything this week from painting the outside and inside, to putting wallpaper up on the walls, creating carpets and rugs, and making their own furniture,” said Snyder.

As the houses were completed, the campers made real estate listings for their houses. Jailynn Patterson’s four-bedroom home on 170 Unicorn Avenue, Unicornsville, Kentucky was listed for $10 billion. The listing, created by Patterson, reads, “It is a beautiful house with Unicorns everywhere. It’s in a really nice neighborhood next to the ocean and there are mermaids in the ocean.”

Snyder said the camp was aided by the community. “We had some items that were donated to us from The Great American Dollhouse Museum. They were very nice to share some things with us.”

Snyder says she likes to involve the Danville community as much as possible.

“We took a walking trip to The Great American Dollhouse Museum on Thursday. They had a great time being able to learn and explore,” said Snyder. “Whenever we can, if there’s a natural tie in, we try and do some sort of field trip pertaining to the camps.”

Snyder says that involving Danville and exploration is a common theme among their camps. Staff will take the kids down to Constitution Square to draw outside or to the plaza to eat their snacks and lunch when weather permits. She said that during a superhero themed camp hosted by the Community Arts Center, campers were taken to the playground at the Presbyterian Church to rehearse a play they had worked on throughout the week.

Another thing Snyder likes about Dollhouse Camp in particular is the wide age range. The camp consists of rising first-graders through rising sixth-graders. 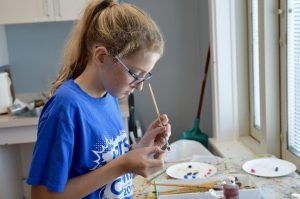 (Casey Craiger photo) Jillian Long, a sixgrader from Lancaster, paints a small detail for her house with bright red paint.

Snyder said that the inspiration for Dollhouse Camp came from similar camps hosted by art organizations around the country. “And with this the idea that kids are given the opportunity to work at their own pace on a singular project for the whole week, and that’s something that I really wanted to see here,” she said.

She said that most of the other camps the Community Arts Center has to offer involve different projects everyday. She likes seeing the single task workings of dollhouse the camp in contrast to other camps hosted before. “It’s a really great opportunity for the kids because it allows them to delve deeper into their own creativity,” she said.

To find out more about summer programming at the Community Arts Center, visit communityartscenter.net.