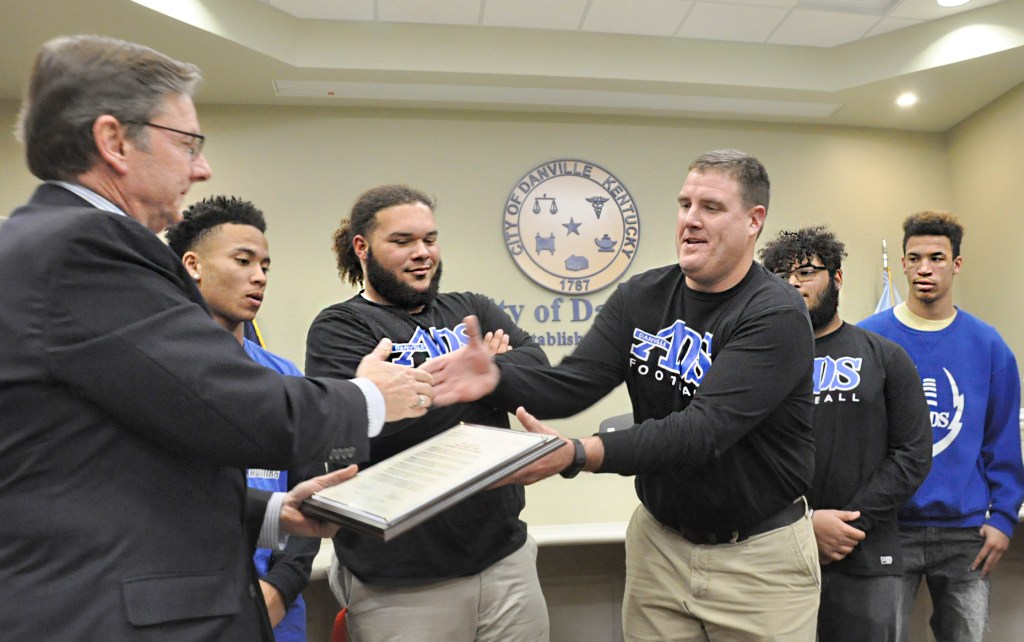 Clay Clevenger was one of the few who knew just how tough it’d be in 2013.

He knew he’d have resistance in laying a new foundation for Danville football.

But it’s a foundation that has been laid, brick by brick, and has been built the Admirals’ program into one of the most feared in the state.

“You read about successful teams, successful people, successful organizations, from sports to business and everything else, and the foundation is the importance,” Clevenger said. “You’ve got to build a foundation on the rock, not built in sand. Those first couple of years are foundational years. Knowing that, I think I had a good understanding of what it was going to be like, and I think I was one of the few. Just the trials that we were going to have to solidify that foundation, trying to get back to a championship level.”

The Admirals did that this year — and Clevenger earned the Bill Vaught Memorial Coach of the Year award for his team’s successes.

The award is a special honor for Clevenger because it was Bill Vaught who wrote the story on Clevenger when he won Advocate-Messenger Lineman of the Year as a senior for the Admirals.

“Bill Vaught’s legacy in central Kentucky, I really do think is second to none,” Clevenger said. “He was covering sports when I was in high school, I was lineman of the year my senior year and he did an article on that. But just hearing the stories, the amount of respect any and everyone that knew him had for him and the job that he did to promote sports, coaches, players. Knowing that about him and receiving the award, it’s humbling, it’s pretty surreal.”

Clevenger’s coaching style is unwavering — he knows that it’s hard work that takes teams to the top.

“Winning games is just a byproduct of what we try and do, it really is. There’s a lot more to this ol’ world than football and winning football games and sports in general,” Clevenger said. “I think the ability to get up every day and go to work is something that you hope to be able to pass along to kids and make them understand that importance. Sometimes you get knocked down, sometimes you don’t, sometimes you go out on top. But you’ve got to get back up the next day, get prepared and win the day.”

Clevenger was quick to thank his support — the families involved with Danville football and his assistant coaches were integral to the team’s success.

“Football, there’s so many variables, so many things that go on,” he said. “It’s not a one man show and it never will be a one man show. Every successful program, there’s a lot of people who make it happen. It starts with my assistants and it trickles down to other support people. The assistants have to show up every day ready to work, they have to be servant leaders and give themselves. Because they don’t make a lot of money, they have to do it for a love of the kids and love of the game. For that, you’re indebted to them and forever grateful to them.”

Danville has returned to statewide prominence and it’s because of a solid foundation that has been built by Clevenger and his staff in the past five years.

“Looking back, I think we were able to do that,” Clevenger said. “Those players in that first year that stuck by and worked hard when things got tough, we lost three games in a row and the last one was really bad to Corbin. They could’ve quit but they hung in there and they fought. Those guys were just as important as anybody on the team this year. I think that’s the satisfying part of it.”