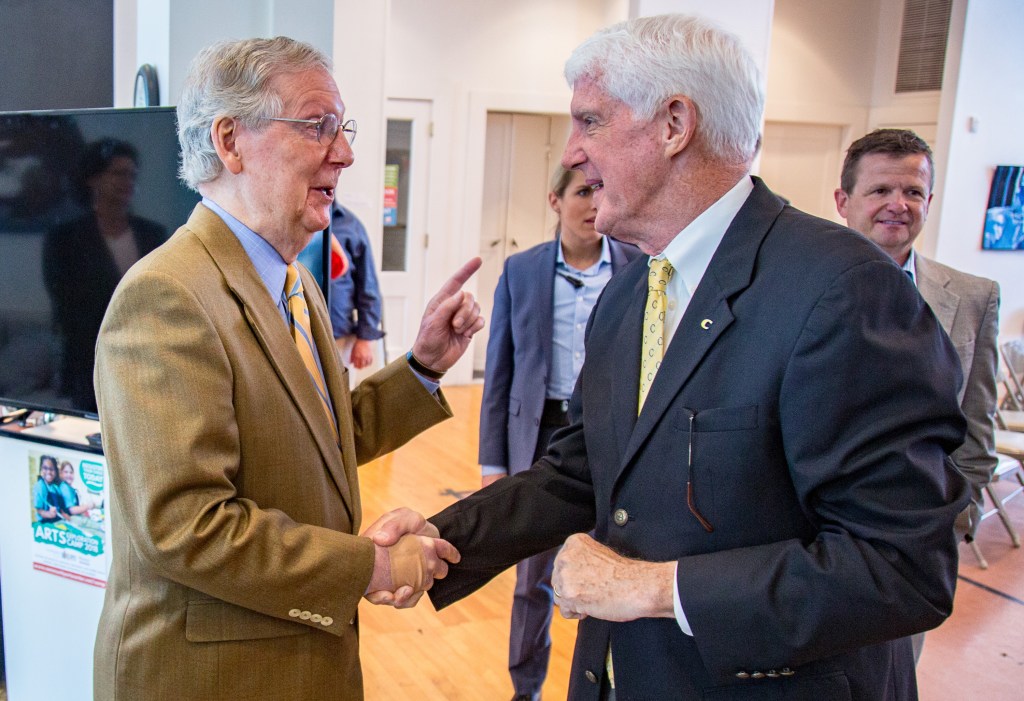 U.S. Sen. Mitch McConnell visited Danville Tuesday morning for a brief speech and Q&A session with an invite-only crowd of about 50 at the Community Arts Center. 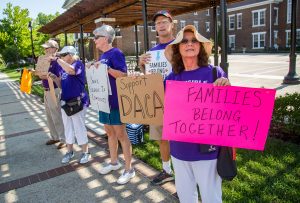 Ben Kleppinger/ben.kleppinger@amnews.com
Protesters with Indivisible Danville hold signs protesting the separation of immigrant parents and children at the Mexican border in Weisiger Park Tuesday, across the street from the Community Arts Center, where Sen. Mitch McConnell spoke.

Outside, about 20 protesters organized by the local progressive group Indivisible Danville stood along Fourth and Main streets, holding signs expressing outrage over the recent policy of separating immigrant parents from their children along the Mexican border.

In Danville Tuesday, McConnell said the Georgetown protesters were “similar to the ones outside here.” 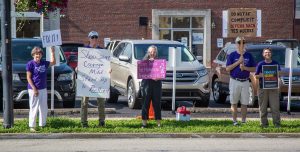 Ben Kleppinger/ben.kleppinger@amnews.com
Protesters with Indivisible Danville hold signs protesting the separation of immigrant parents and children at the Mexican border, across the street from the Community Arts Center, where Sen. Mitch McConnell spoke Tuesday.

“I said to the secretary of transportation (Chao), ‘Why don’t you ignore them and get in the car?’” McConnell said. “She ignored me and went right up to them.”

Julie Pease was one of the Indivisible Danville protesters standing in Weisiger Park Tuesday morning, waiting for McConnell to arrive.

“We feel that Sen. McConnell has been silent on the whole issue of family separation at the border. And this is the only way we actually get to see him, because he will not meet with us, he will not hold a town hall,” Pease said. “So we feel we need to come out when we do find out where he is and let him know that not everybody is complicit in what they’re doing and don’t believe that families should be separated, and we are a nation of immigrants.”

McConnell focused many of his comments on the U.S. court system and the recently announced retirement of Justice Anthony Kennedy from the U.S. Supreme Court.

“Back during the campaign, we had a nominee for president who was rather unconventional — I think we would all agree,” McConnell said of Donald Trump. “And there was a lot of questions, among Republicans in particular, about what we were getting.” 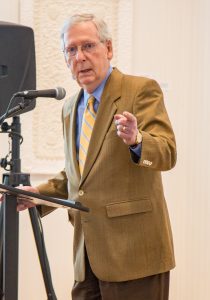 McConnell credited his refusal, in the wake of the death of Supreme Court Justice Antonin Scalia, to consider any nomination to the Supreme Court from then-President Barack Obama, along with a list released by Trump of the names he would consider appointing to the court if elected, with helping ease those concerns.

“It actually made a big difference” in the election, he said of Trump’s list, because “whatever sort of skeptical Republicans there were came home” and voted for Trump.

As a result of the 2016 election, Republicans have been able to begin transforming the U.S. court system through the appointment of new judges, McConnell said.

“I think the single most impactful thing this administration has been able to do long-term is the kind of people we’re putting on the courts,” he said. “And that frightens some people, but let me tell you what a strict constructionist is: It is neither a conservative nor a liberal; it is someone who believes what Justice Scalia once said — that the job of the judge is to try to follow the law or the Constitution as it is written. You would think that would be pretty simple, but that’s created a rip-roaring debate down through the years.”

McConnell said Republicans helped confirm 12 Trump judges at the circuit level in his first year as president — the most confirmations in any president’s first year since 1891 when the modern circuit court system was created. Now, a year and a half into Trump’s presidency, 21 judges have been appointed, representing one out of every eight judges at the circuit level.

“We have a lot to be proud of, in my view,” McConnell said. 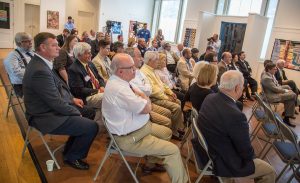 McConnell also touted his work to pass the current Farm Bill that would greatly expand the ability of Kentucky farmers to grow hemp.

The Farm Bill has passed the Senate but not the House. The Senate version declassifies hemp as a controlled substance and puts hemp production under the authority of the U.S. Department of Agriculture, rather than the Department of Justice, McConnell said.

If the change can make it into law, there will be “a rather simple regulatory regime under which a state like (Kentucky) would let the USDA know it wanted to grow hemp, and then if somebody in Boyle County wanted to get into the business, all they (would have) to do is register … with the commissioner of agriculture.”

When McConnell opened it up for questions, the first was about McConnell’s thoughts on federal Judge Amul Thapar, a Kentuckian who is one possible choice Trump could nominate to fill the Supreme Court seat being vacated  by Kennedy’s retirement.

“I don’t know who the president is going to pick, but obviously I have a favorite — and you should, too, because he’s from our state,” McConnell said.

McConnell was also asked about “what’s happening on our southern border.”

“We’ve been wrestling with immigration problems for quite awhile,” he said. “And it seems not to make any difference who is in charge.”

Democrats have failed to enact immigration reform when they have “total control” and Republicans are similarly struggling to find a solution now that they have the reins, McConnell  said.

“I wish I could see the path forward, but the honest answer is I don’t see it at the moment,” he said.

On a question about the upcoming midterm elections, McConnell acknowledged that, historically, the party of a newly elected president usually does poorly, but he hopes the Republicans can maintain control of the Senate and further solidify their alterations to the makeup of the courts.

“I do think the most impactful thing we can do for this country long-term is the transformation of the court system, which I think is good for the country,” he said. “And all this hand-wringing about what may or may not happen on particular issues that are hot-button issues are, in my view, just political nonsense.

“The real issue is: What do you want the judiciary to be? Do you want to have a fair shot when you’re in court? Wouldn’t you like to have somebody who’s interested in what the facts and the law is, rather than what they think ought to be done?”

As he wrapped up his hour in Danville, Centre College President John Roush raised his hand, not with a question, but with a thank you to McConnell for his “service to our country.” Roush said he appreciates all that McConnell has done “not just for Kentucky, but America.”

Danville Mayor Mike Perros asked the final question, wondering what it would take to restore trust in government institutions like the FBI, Department of Justice and others that the current culture in Washington, D.C. has seemed to undermine. 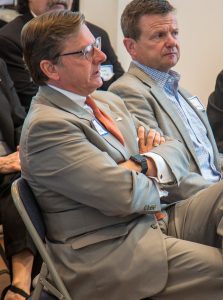 “I tune out a lot of this back and forth because it is unrelated to what we’re doing on a day-to-day basis,” McConnell responded.

There have always been strong disagreements between leaders in Washington, including disagreements much more bitter than those seen today, he said, pointing to fighting between Alexander Hamilton and Thomas Jefferson and when, in 1865, a U.S. representative beat a U.S. senator with a cane.

“The public was largely insulated from all that because of the means of communication. But we are today just hammered with cable TV, internet, instant communication, pick up your iPhone and it’s the latest outrageous comment about somebody,” McConnell said. “I think it does rattle everybody. … The reality of the situation is that the government is doing just fine. It’s right of center, it used to be left of center. We go back and forth because the American people change their minds about what they want, but the country is just fine. And I don’t think any of you ought to be just completely rattled by all the noise. There’s a lot of noise out there. And unfortunately they teach you in journalism school — all due respect to the people in the back of the room — that only controversy sells.”

McConnell said Washington leaders have been successful in many things, including passing a five-year highway bill when it used to be difficult to even pass a two-year bill.

Congress and President Obama passed a five-year, $305-billion highway bill in 2015, the “first long-term national transportation spending package in a decade,” according to reporting from The Hill at the time. That bill expires in 2020.

McConnell said this year, the “appropriations process is better than it’s been in 20 years.”

“All of this doesn’t make any of the news because they’re examples of people responsibly trying to do what they’re supposed to do together,” he said. “Yeah, we have some big differences … but there’s an awful lot we do that you’d be pleased about if you ever heard about it. So that’s one of my main frustrations — the country isn’t broken.”

McConnell said the founding fathers were “geniuses” who understood human nature and put too many checks and balances into the U.S. system of government to allow for anyone to undermine it.

“Whether you’re freaked out on the left or freaked out on the right, don’t worry,” he said. “Nobody can break this country because there is no individual or group of individuals who can ever totally prevail — to the endless frustration of many of us who would like to go in this direction and we get checkmated, and the same thing happens on the other side. So fear not, your country is in great shape.”

Boyle County Republican Party Chair Tom Tye said he thought McConnell was “dead on” with his speech and answers.

“The Constitution is bigger than any party. I’m almost at a loss for words to describe it, I’m just such a fan of the Constitution and what we’ve done to this point,” Tye said after the event. “He’s absolutely correct — the founding fathers were geniuses. They knew we’d run this thing off the rails, so they tried to build the safeguards in there to protect us from ourselves. And it’s worked for a while, and it appears to still be working.”

Tye said he also agreed with McConnell’s comments that having him as Senate majority leader allows Kentucky to “punch above its weight.”

“Sometimes you like him, sometimes you don’t like … his position on something, but he gives Kentucky a front-row seat on the goings-on of the world,” Tye said. “And if the citizens of Kentucky don’t realize that, shame on them. Whether you’re a fan or not, why would we want to trade him for someone who’s sitting in the back of the room with no voice?”